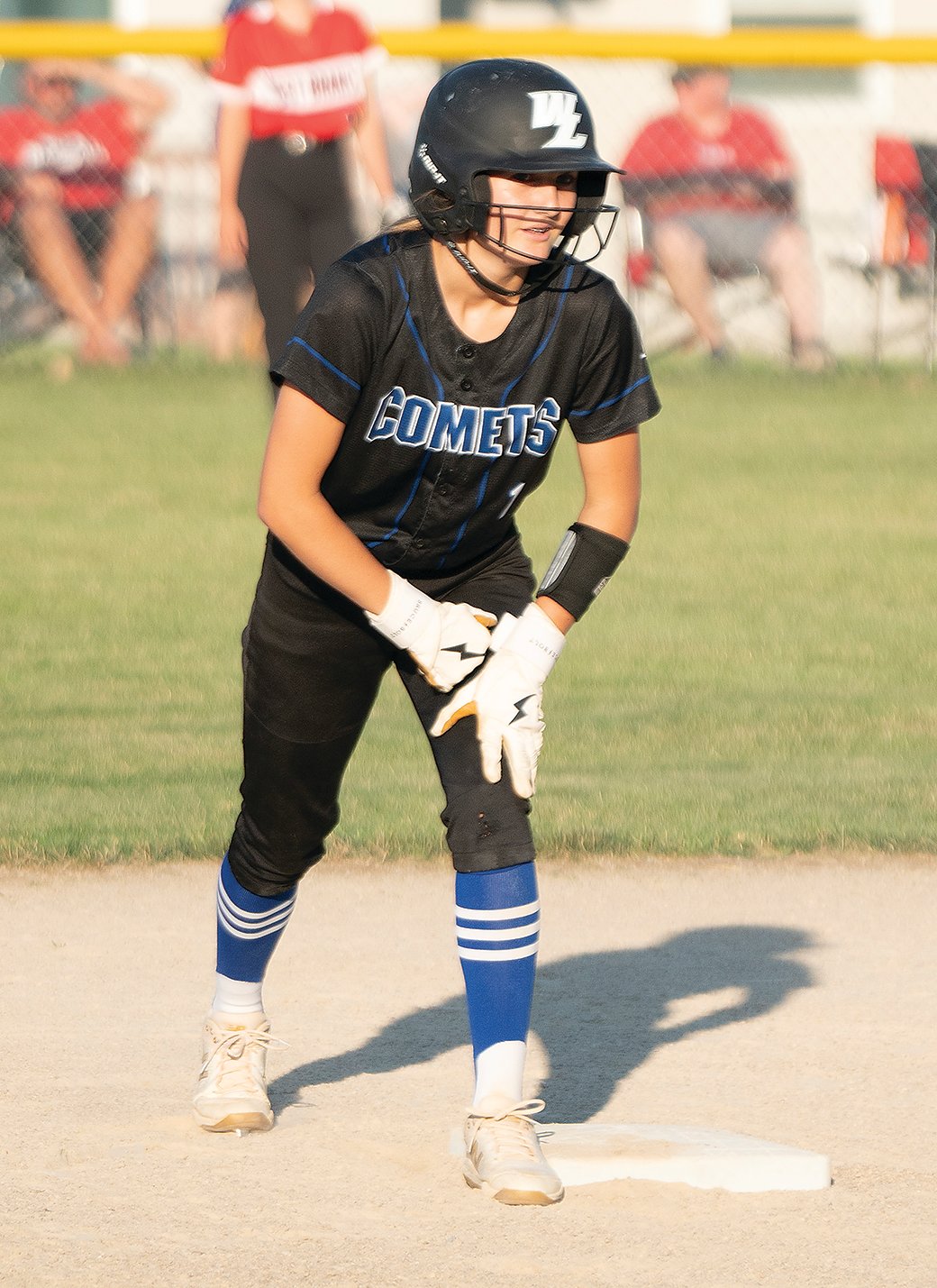 The West Liberty softball team had a busy week in their last week of the regular season, playing in seven games and going 4-3 overall, capturing wins over West Branch, Regina, Mount Pleasant and Top Ranked 5A Waukee Northwest. They also fell to Iowa City Liberty, Cascade and Williamsburg.

The week started with Senior Night against West Branch Monday, June 27, both teams came swinging out of the gates, pushing across a pair of runs each before the Bear bats went quiet.

The Comets continue to spread it on, putting up an additional run in the second. An eight run explosion from the Comets in the fourth saw them take firm control of the matchup and put the Bears in the fifth, 12-2 victors.

Tuesday, June 28, the Comets matched up against the Cougars. For the second night in a row, both teams were quick to bat, pushing across two a piece in the first inning. A couple of innings of peace followed before Cascade pushed across their third run of the Contest. The Comet bats failed to get any other production in the contest as the Cougars pushed across two more in the seventh to take a 5 - 2 victory.

Sailor Hall did work for the Comets again in the circle, striking out six on 10 hits and three earned. Finley drove in the Comets two RBI coming off a two run homerun.

Wednesday, June 29, the Comets matched up against the Regals for their final conference matchup of the season. The Comets found the bats early, pushing across three runs in the first inning. The Regals pushed across one in the third, but a quick two run response found the Comets holding strong with a 4 - 2 advantage. The matchup turned on its head in the fifth, as the Regals pushed across five runs to capture the lead 7 - 4.

The momentum quickly shifted, as the Comets responded with five runs of their own in the fifth to reclaim a 9 - 7 lead. Neither team scored in the final two innings and the Comets took the 9 - 7 victory to finalize their first outright RVC South title. Sailor worked for the third time in the week, striking out four on 10 hits. while leading the Comet bats with four RBI in the contest.

The Comets put a cap to their regular season Friday, July 1, and Saturday, July 2, in Iowa City in the annual season ending tournament hosted by West High. The weekend started against Class 3A's third ranked Williamsburg. The Raiders dispatched of the Comets in four innings, capturing a 12-0 victory as the Comets were held to a pair of hits. Sophie Buysse and Mallory Wulf split time in the circle for the Comets.

The second matchup of the day saw the Comets take on 5A's top ranked Waukee Northwest. The matchup featured a pitching dual, allowed a combined 11 hits in the seven innings matchup. Both teams were held scoreless until the sixth inning when the Comets finally broke through scoring a pair. The Wolves were unable to mount a comeback in the final two innings and the Comets claimed the 2 - 0 victory.

Sailor Hall took to the circle, recording zero strikeouts relying on the play of her defense to keep the high power Waukee Northwest offense in check. Sailor and McKenzie Akers combined for one RBI each in the win.

Saturday the Comets matched up against another 5A school, this time against 7th ranked Iowa City Liberty. The defenses did battle once again as both teams struggled to get runners on base.

The contest was scoreless until the seventh inning as the Comets were unable to escape the jam and a blooper to centerfield scored the walkoff run, with the Lightening capturing the 1-0 victory. Sailor struck out three on five hits. Pearson Hall and Kiley Collins were the lone Comets to record hits in the matchup.

After a rough weekend at the plate, the Comets were finally able to let their bats shine in their final matchup against Mount Pleasant. the Comets pushed across a pair in the first inning and an addition run in the second. The Panthers recorded a lone run in the third before watching the Comets extend their lead following three in the fourth to take a 6-1 lead. The final run for the Panthers came in the sixth, proving to be too little too late as the Comets quietly closed out the Contest, 6 - 2 victory.