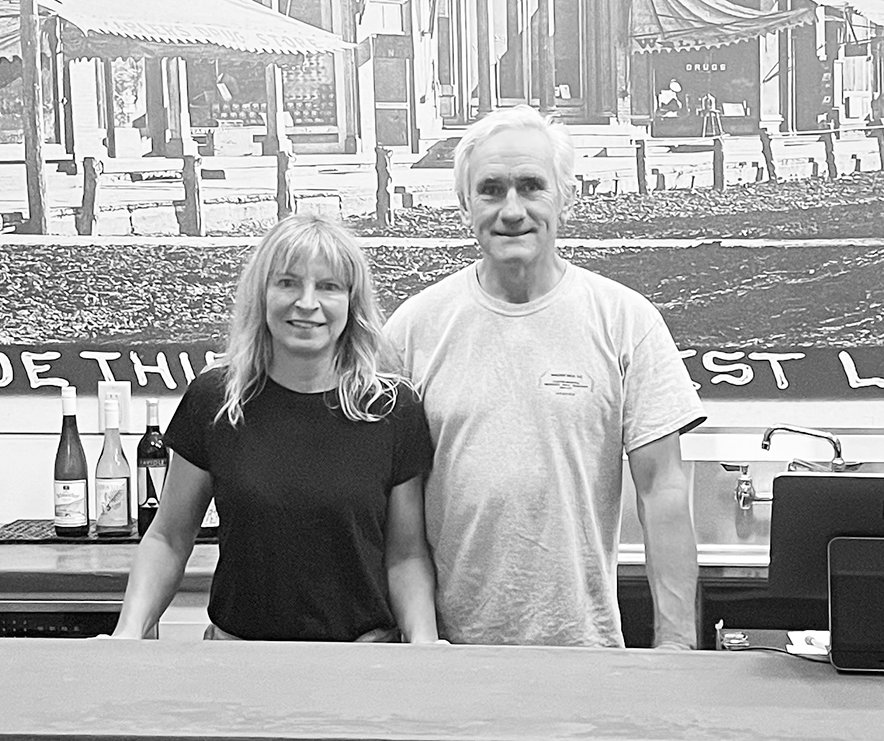 Emily Geertz and Frank Wagner stand behind the bar at Liberty Public House. The two decided to open Liberty Public House after noticing a need for a place that could be rented out for events or to pop in at on Friday evenings for a beverage. The grand opening will be this Saturday from 4 to 11 p.m.
Posted Wednesday, September 21, 2022 10:28 am
Phyllis Owen Sterba, Index History Writer

This weekend marks the long-awaited Grand Opening of Liberty Public House, a wine, beer, seltzer and canned cocktail Bar and Event Space. The opening will feature live music and food. Located at 115 Street in West Liberty, the recently renovated structure, built in the 1870s, is owned by Emily Geertz and Frank Wagner.

The couple acquired the property from the City of West Liberty in 2021, with the goal of restoring the historical integrity of the building while providing 21st century commercial and residential space.

Liberty Public House is at the rear (north side) of the building. A paved sidewalk to the rear entrance was added, which provides for easy access and maintenance. Parking is available on Spencer and Calhoun Streets.

The lower front part of the building is leased to Sara Sedlacek of Edward Jones Financial Services. The office is accessed by an ADA compliant ramp on Third Street, which is a requirement of all Edward Jones branches.

Originally, Geertz and Wagner had to ponder a bit on how exactly to use the space at the rear of the first floor. With the closing of Local Grounds and the Liberty Social Club a few years ago, they saw a need for something similar. Geertz felt "It’d be a good place for people to meet up and where groups and organizations could rent the space for meetings and private parties."

The couple has had prior experience with historical renovations in both West Liberty and Iowa City. Wagner owns Wagner Bros. LLC construction company.

They received a $100,000 catalyst grant from the Iowa Economic Development Authority with the help of WeLead and the City of West Liberty to offset the substantial costs of the project.

The first task at hand was replacing the roof. Geertz and Wagner hired West Branch Roofing to remove the existing roof and install a new 60 mil TPO Invisiweld roof system. This included five inches of R-30 foam insulation under the membrane.

Wagner and his crew set about gutting the interior of the entire building. They filled thirteen 20-yard roll-off dumpsters with refuse. This excluded many tons of salvaged materials and recyclables. In essence only the front and side brick walls and the interior wall and ceiling joists and rafters remained.

The ceiling on the first floor, which had been covered up by a drop ceiling for the past 50 plus years, was 1x6 inch tongue and groove bead board. At some point in the late 19th century, a pressed or stamped metal ceiling was installed. That was commonly known as a ‘tin’ ceiling, with hundreds of tiny square nails. For the build out of the Edward Jones’ commercial space, Geertz and Wagner were able to restore the front portion of the “tin” ceiling which one can now appreciate, while also meeting the requirements of a twenty-first century office space.

The renovation of the second floor required extensive demolition. Sometime between 1910 and 1920, Wagner said a ten-foot lath and plaster ceiling was installed under the original twelve-foot lath and plaster ceiling. Trim and lumber stamped with A.L. DICE, a lumber dealer in West Liberty from that period, was found throughout the two second-floor apartments. In the 1970s, the second floor was once again renovated, creating three apartments, all with dropped ceilings at 8 feet.

The couple wanted to restore the façade of the building to the greatest extent possible. “The windows facing Third Street are historically accurate replications of the original windows of the 1870s, but with more energy efficient glass, of course,” Geertz said. For the first-floor storefront, Geertz and Wagner employed MGSI from Iowa City to remove the existing glass and install tinted, insulated windows in its place.

During the restoration, they discovered that the original door jamb was still intact and decided to replicate the original door. ‘We purchased dimensional oak lumber from River City Hardwoods in Muscatine (dimensional being true two-inch dimensions, unlike new lumber),’ Geertz shared.

The couple asked local resident and business owner Bruce Browning, also an accomplished woodworker, to build the door for them. The new door has tinted and insulated glass and incorporates antique hardware similar to the original. Wagner found this hardware at the Iowa City Friends of Historic Preservation Salvage Barn, which Browning was able to install.

The vertical glass sign saying SNIDER’S which was placed between the front doors of this building and the adjacent 113 Third Street building about a century ago, still stands there today. The Sniders operated a furniture store and funeral parlor in these buildings.

For the second-floor windows, Geertz and Wagner did extensive research to find someone who could replicate the four original arched double-hung windows that long ago had been regretfully removed. They discovered Heirloom Windows of Crawfordsville, Indiana, whose owner Bill Hepburn specializes in replicating historically accurate windows throughout the United States.

After months of demolition, it was discovered there was no sewer line from the building. “At some point, probably a hundred years ago when the sewer was installed, the adjacent building (now Yolanda’s Salon at 113 East Third) and our building shared a sewer line that exited through her building. We needed to trench in a new sewer line from our building to the main in the alley, an unplanned discovery and expense,” Geertz explained.

The reconstruction of the entire building required completely new plumbing, electrical and HVAC to service the two new apartments on the second floor and the two commercial spaces on the ground level.

Prior to acquiring the building, the City of West Liberty removed the rear single-story additions of the structure. Once Geertz and Wagner decided how they wished to use the rear portion of the building, they proceeded to remove the temporary wall erected by the City. In its place on the ground level, they constructed a thirty-five-foot addition with ten-foot ceilings for Liberty Public House.

For the history buffs in town, above the bar in Liberty Public House is an enlarged sixteen by seven-foot photo of East Third Street taken in 1911. It is interesting to learn that the building next door at 113 was for a time only one story. From what Geertz could tell on the Sanborn fire maps, it was a one story in 1906, but a two story by 1922.

On the east wall of the event space is a mural of 1899 Muscatine County townships, along with an 1874 map mural of West Liberty, Atalissa and Adams.

“Most of the wine is from biodynamic or sustainable vineyards,” Geertz added. Non-alcoholic drinks are also available.

Liberty Public House is open 3:30 - 11 p.m. Friday evenings. It will also be open for special events such as live music, trivia nights, and the like.

The event space can be rented out for such events as showers, birthday parties, reunions, business meetings and more.

Liberty Public House has a projector, which they allow anyone renting out the space to use to show documents, pictures and do presentations.

Come see Emily and Frank’s project of labor and love and commitment to their community. A grand opening is scheduled for Saturday, Sept. 24, from 4 – 11 p.m.

For a complete history of this building, see page four.