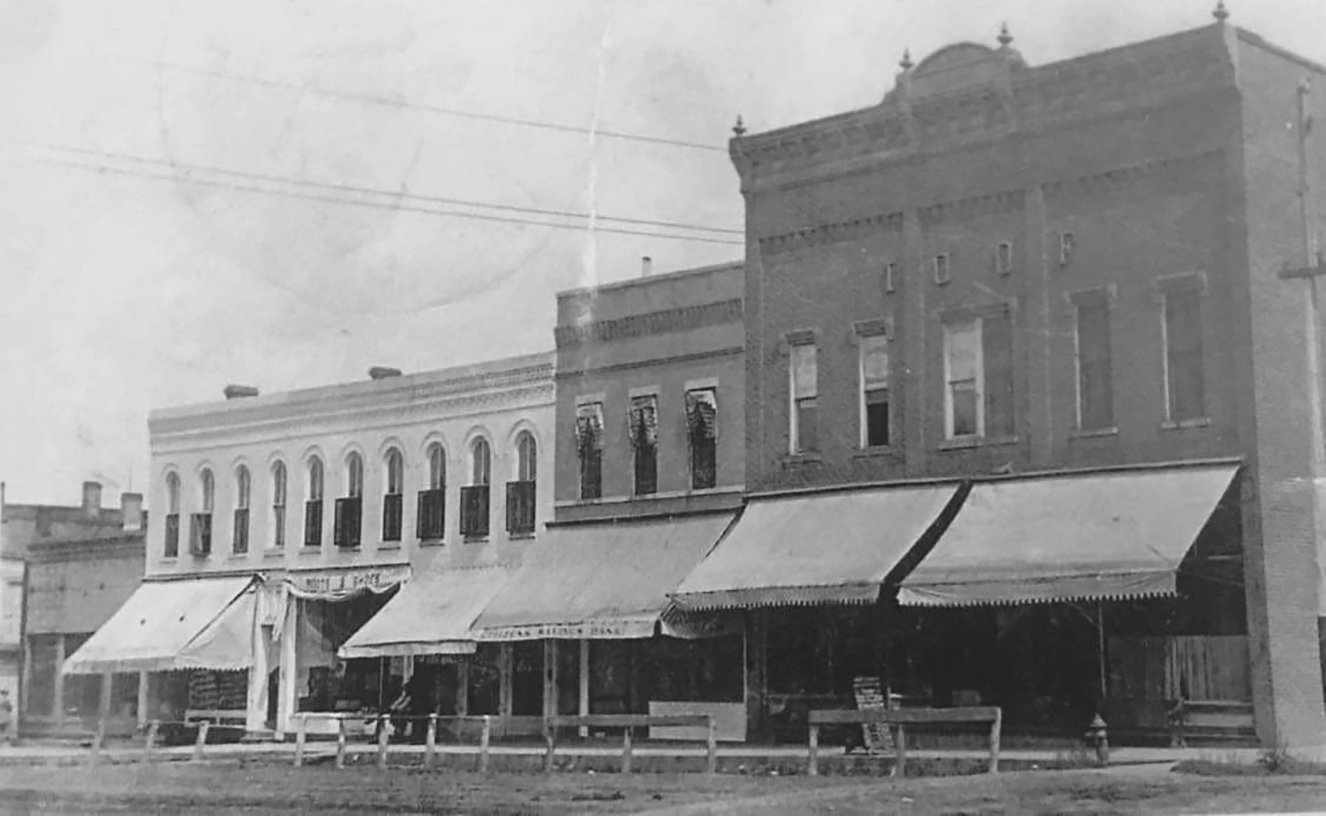 In 1838, the year West Liberty was founded, Sam Bagley patented eighty or so acres to the south of the original settlement. (West Liberty was located more north and west originally.When the railroad came to town in 1855, it moved south.) Bagley passed away soon after, but his wife Lois and son William took over the farm. In 1840 they were able to pay it off and they received a warranty deed. The family farmed the place until 1851, and then sold out to Skillman Alger. Alger built a house on the hill on the corner of Fourth and Spencer Streets, overlooking the farm. It was the first dwelling built within the city limits.

Alger sold out in 1856 to John Spencer, J.W. Clark, and T.J. Robinson, who were platting the "new town." This group of men then sold out to Eli Messmore on July 1, 1857. Messmore sold out on the very same day to John Miller.

Miller kept the land for seven years until 1864. The Civil War was going on. Miller sold to John Schmucker. He kept it for just over a year and then sold out to Henry Harrison in June of 1865.

Harrison owned it for only two years, then sold the land in January of 1867 to Stephen Burris. On Oct. 5, 1870, Jesse and Rachel Bowersock purchased the part of the lot that present day 115 East Third is on.

It’s recorded the Bowersocks built a small wood structure on the site, and may have operated a dry goods store.

In the next decade, the wood building was torn down, and the present day brick structure erected.

In 1881, with Jesse and Rachel having relocated to California and passed away, their children sold out to John Lewis and S.T. Chesebrough. A newspaper clipping indicates they were paid $5,000 total for the building at 115 and two other buildings their parents owned.

It’s believed Lewis started up a grocery store at 115. Chesebrough was in the banking business, so he was probably the financial partner, with Lewis being the working partner.

If it was a grocery store, it did not last long. In 1888, Mrs. Reep’s Bazaar opened, selling hair ribbons and lace decorations. This was followed by Fila Jackson’s Notions and Hats Store.

Milnes started in August of that year, and carried "the largest and finest stock in the line." He was also an expert embalmer, who, together with his assistant, W.G. Mosher, were prepared to do the best of work. Mr. Mosher was born and raised in Wapsie township and was a graduate of the Chicago School of Embalming. In 1899, the furniture store became known as Peoples Furniture Store.

The following year Sherm and Carrie Snider purchased the building from Detwiler. The Sniders sold furniture out of this location. Next door at 113, where a cream buying station was occupied, the Sniders extensively remodeled the space and opened a funeral parlor. Their daughter and her husband Virginia and Raymond Gehrke joined them in the business in later years. The Snider sign placed between the front doors of their two buildings long ago is still visible today.

The Sniders were responsible for building the second story on 115 and also built 117 East Third Street (currently WeLead).

After over 30 years in business, the Sniders moved their funeral parlor up the street to the current location at 205 East Third (the former Pickering residence). As a result, the furniture business was transferred out of 115 and moved into 113.

Hawker declared ‘the tables would be kept in the best condition, and he would cater to those who appreciated the enjoyment to be found in billiards.’ Tobacco and soft drinks were sold.

The back room was where retired people and senior citizens spent many pleasurable hours playing cards, and it wasn’t just Rook or Old Maid!

The building included apartments on the second floor, with Mr. and Mrs. Fred Watters living there in 1941 about the time the Hawkers opened.

Business was going well until December of 1941 when the United States declared war on Japan. The Hawkers had to keep going through rough times, when goods were restricted or not available.

At the end of the war in 1945, they celebrated at the billiard hall! Earle’s account of the day mentioned a sawed off shotgun that "accidentally" discharged and shot a hole in the awning, catching it on fire. It was necessary to call the fire department to douse the flames.

"After setting the awning on fire, we moved to the back of the building where some firecrackers and more shooting took place. There must have been at least 25 of us back there, and eventually we formed a large circle and several (I won’t mention any names) had been hoarding up some Good Spirits (which had been hard to come by as it had been rationed), and one fifth didn’t make the round!"

After the war, restrictions on items were lifted and the economy gradually recovered, with the Hawker’s business continuing to do well.

George Sickman’s barber chair was moved to the front of the building, with Emmor Stokes becoming his associate.

The Hawkers decided to sell out to Lawrence (Pete) and Martha Peters in December of 1948. Ross Peters of West Liberty is the Peters’s son, and he recalls living at 115.

The Peters took out two of the pool tables and started up a lunchroom. Martha became known far and wide for her "out of this world" soup, great burgers, and delicious meals. It really was about the good food here, much more so than playing pool.

A shoe shine chair was added, and of course there was still room in the rear for a friendly game of cards.

For a time, Sam Buckman had his real estate and insurance office in the front part of Pete’s, and it was there that he and his wife Clara acted as clerks for the large weekly sales at the Gibson Sale Barn. Clara’s father was Phin Gibson

In November 1970, Pete and Martha sold out to Robert and Bertha Buckman, who remodeled the building and added on. They leased to Jim Rowen Food Services.

The business was named The Cookie Jar, serving meals in the front part of the building, with pastries available at The Cookie Jar Bakery in the rear. In March of 1976, the Rowens ceased renting and purchased the building, but they had to close "The Cookie Jar" the next year. Jim and Joyce were also running Coffeetown Restaurant at the time, which was taking a lot of their time.

‘The food, service and chatter that went on there were unusual, and when "The Cookie Jar" closed, "it was sorely missed," Elmer Meredith wrote.

He went on to say that back then,"without a doubt, it was the finest restaurant West Liberty has ever known."

The Rowens remodeled the front part of the building into a store, where Donna Hintermeister opened a dress shop, "The Better Half." There was a hallway along the inside of the building leading back to "The Cookie Jar Bakery" in the rear, which stayed open.

Many still talk about the "melt-in-your-mouth" glazed donuts that "were the best around," made by baker Virginia Rohner.

After Donna’s dress shop, several attorneys rented the space. That was followed by West Liberty Pain and Stress Clinic.

In August of 1983 the Rowens sold the building to Bob and Jan Fulwider of Wuestenberg Insurance. The Fulwiders added a few walls for office space in what had been the store front, and several more in the back for space they planned to rent out.

One of their tenants was Starlite Press, run by J.J. Fulwider and Karen Thurness. They had purchased Norton Hardin’s equipment when he retired from the printing trade. J.J. and Karen kept their day jobs with the City of West Liberty, and did printing in the evenings. They did well through the mid 1980s, but then business picked up and they became so busy after work that they couldn’t keep up. In 1992, they sold out to Larry Freeman who started his own printing business on West Third Street.

The Fulwiders eventually used the rear area for storage. They blocked off the hallway that went back to the rear. During their time, you had to go in the front door and then take an immediate right through another door in order to reach the office space.

Two apartments were upstairs at the time, accessed by a stairway from the parking lot at the rear of the building.

Today the building is owned by Emily Geertz and Frank Wagner, having purchased it from the City of West Liberty in 2021.