Emergency services to be provided through October 1 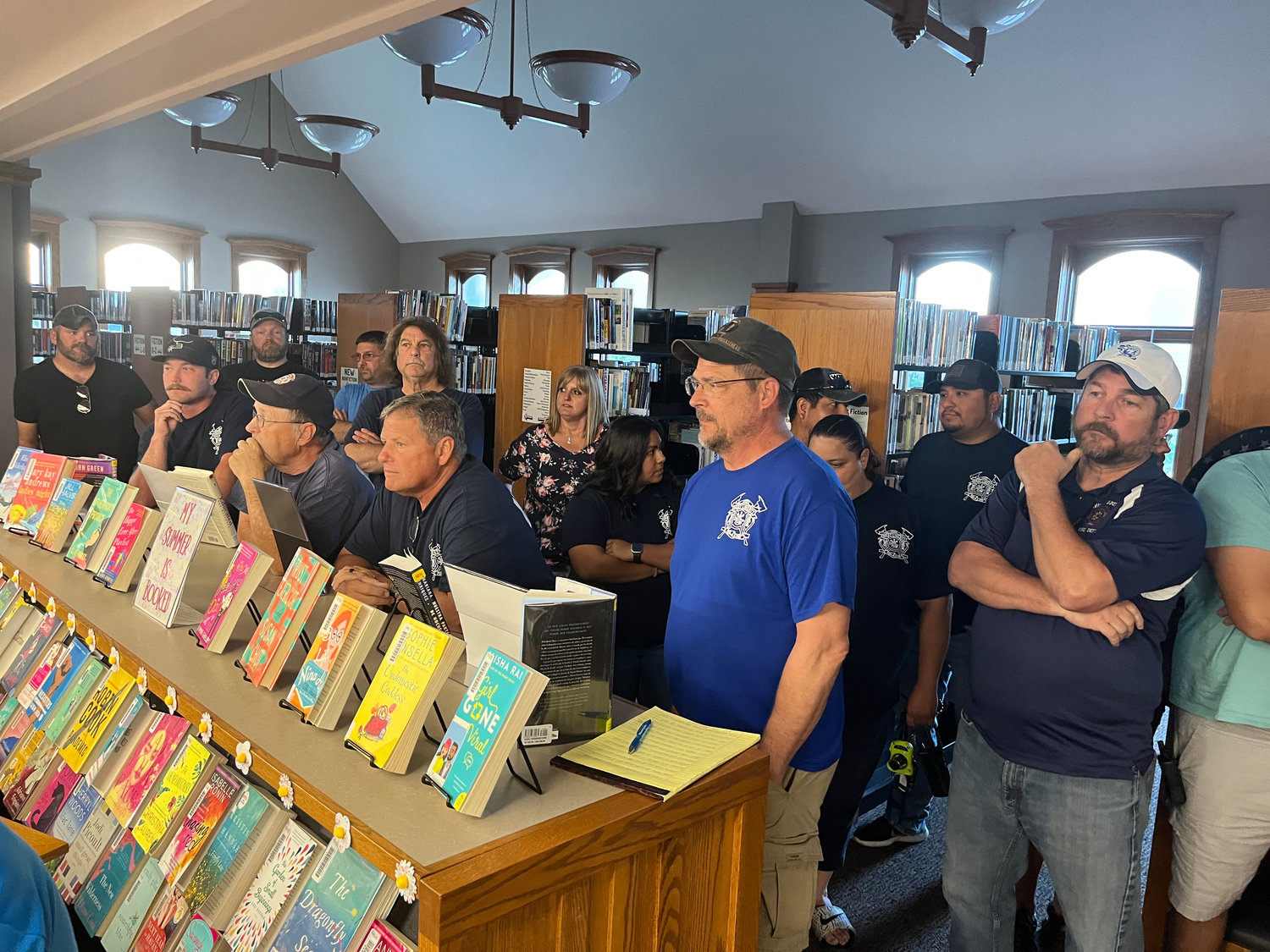 Members from the West Liberty Fire Department and public attended the city council meeting, which was moved from the community center to the library to accommodate more people due to interest Tuesday, June 7.
Index photo by Tim Evans
Posted Wednesday, June 15, 2022 9:22 am
Tim Evans, Index Editor

After learning there was “no viable option” for the City of West Liberty to provide fire protection and ambulance service for the community after June 7, a back-up plan went sour for the West Liberty City Council.

Although not unanimous, in a historical vote by the West Liberty City Council on Tuesday night, June 7, West Liberty First Responders won the decision to continue to service the community with fire and emergency medical services while negotiations moved forward between the city, West Liberty Fire Fighters and the Rural Fire District board.

The decision came following the fire department’s latest plea and extension with the city in providing a “Letter of Commitment” to move forward on discussions through at least Oct. 1, when they hope an agreement can be reached to form a new 28E Agency, a new association between the three groups.

Should the commitment not take place, local homeowners and business insurance rates would have skyrocketed as protection, even supplied by nearby mutual aid departments would not be able to answer emergency calls on a timely basis.

Mayor Katie McCullough came out following several speakers in the open forum portion of the meeting, saying she learned “just three hours ago” that the plan the city had in hiring a new assistant fire chief and gathering mutual aid agreements had fallen apart. “The city manager (Dave Haugland) did not have a comprehensive or cohesive back up plan,” the mayor reported to the dozens in attendance including most of the fire department volunteers.

She said the city had a person identified to take the assistant chief position, but said there were “inconsistencies” and “that person did not agree” to take the position. McCullough said the city received a “skeletal” plan from the city manager, but noted he was not at the meeting to defend his work. He was on vacation.

She warned council members that if the Letter of Commitment wasn’t signed that night, it would “put this city in danger,” noting she “doesn’t use that term lightly.”

“I don’t know how, in good conscience, (the letter could not be signed), ” knowing that even if the response by mutual aid groups is even two minutes longer than local response time, it would have serious consequences to a home fire or ambulance call.

The mayor said not signing the commitment would mean the city would have no fire chief.

City council member Dana Dominguez agreed, noting she’s been hard at work reading the long history of emails between the city and fire department and said the documents made her “tear up” at times.

Dominguez, who ran for the council seat in hopes of resolving the 2.5-year issue with the fire department and Rural Fire District, said she didn’t “feel we had any other choice” but to sign the agreement. It was noted the mayor and city clerk were actually the only officials who needed to sign the agreement already signed by the fire department leaders. The council simply needed to approve the signing.

Omar Martinez, who is a member of the fire department and another council member who won his seat running on the issue, said he has a lot of respect for council members and pointed out “everyone has their views.”

“Let’s start fresh with fresh intentions,” he said about the new Letter of Commitment, noting he’s been stressed out about the issue for the past five months since getting elected.

“If we work as a team, we can make great things happen in this community,” Martinez said.

After Dominguez made the motion to sign the letter, the verbal one-by-one vote went 4-1 in favor of signing the letter of commitment, with the only descending vote from council member Diane Beranek, who gave an emphatic “no” as the final council member to vote on the issue.

After the meeting, Beranek was asked by the Index why she voted against the signing. “I’m not going to talk about that,” she said, failing to provide a reason for the city residents she represents.

Beranek, a long-time member of the council, came under fire at the meeting by former first responder Larry Miller, who pointed out at the work session held by the city council’s public safety committee at the May 17 city officials said they were proud of the work of the fire department and called them “experts in their field,” yet addressed Beranek for stating that the firemen “must hate the city if they’re willing to walk.” She denied saying the statement and accused the first responders for not being willing to come to the table to talk about the issue with the city.

She questioned why first reponders would walk out on city residents “if they were mad at us (city council).

Jeff Owen a rural resident and local farmer gave actual incidents of local EMS and fire fighters taking care of emergency situations including a fire at his own farm where he lost five tractors.

He said the “life and death of this town is dependent” on the fire department and EMS crews and asked “for the sake of the community” for the council to sign the letter. He pointed out the council needs to think of the future of the community in the fact West Liberty Foods has decided to build a new facility in West Liberty. “Have a heart,” he said, pointing out the present city hall even once served as the city’s fire department. He also pointed out that everyone at that meeting likely has utilized by the services of the local fire department.

Paul Reed, a local fireman, talked about his nearly day-to-day work as a fireman and EMS responder, inviting council members to “go on a call with us.” He said the city can’t be dependent on mutual aid, noting he’d be “scared to death” as a homeowner should that happen. “I bust my butt to make sure everyone of these people are safe,” he said. “You all seriously need to suck up your pride tonight (to sign the agreement).”

Kirt Heckman, a local resident of nearly 40 years and a WLHS grad, said he has a very good understanding of what the fire department wants and what the Rural Fire District wants, but hasn’t heard what the city wants from those two entities. He criticized the fact the city hasn’t been transparent about the issue.

“Enough of hiding behind litigation,” he said. “Let’s talk as a group.”

Council member Jose Zacarius said he has met with fire officials about the issue and their Memorandum of Understanding presented last month, but said he doesn’t agree the city should give up fire department property and equipment.

“For the past 18 months, we haven’t been able to make any progress,” he said, noting neither group “sees the other side.”

“We need to get serious about negotiating,” Zacarius said, pointing out his property was saved about eight years ago by fire fighters, noting “Larry Miller was there within three minutes.”

Fire fighters fired back saying they’ve been trying to negotiate – especially with their recent document developments – and Zacarius suggested the city and first responders put together small groups to attempt to resolve the issues, the fire fighters noting the Rural Fire District should also be included. Dick Brand, president of the RFD, who was also at the meeting, agreed.

Assistant fire chief Tom Christensen also pointed out at the meeting that his group is trying to find the next step to keep negotiations moving forward.

“Let us do what we have volunteered to do,” he said, continuing. “For the good of the whole community.”