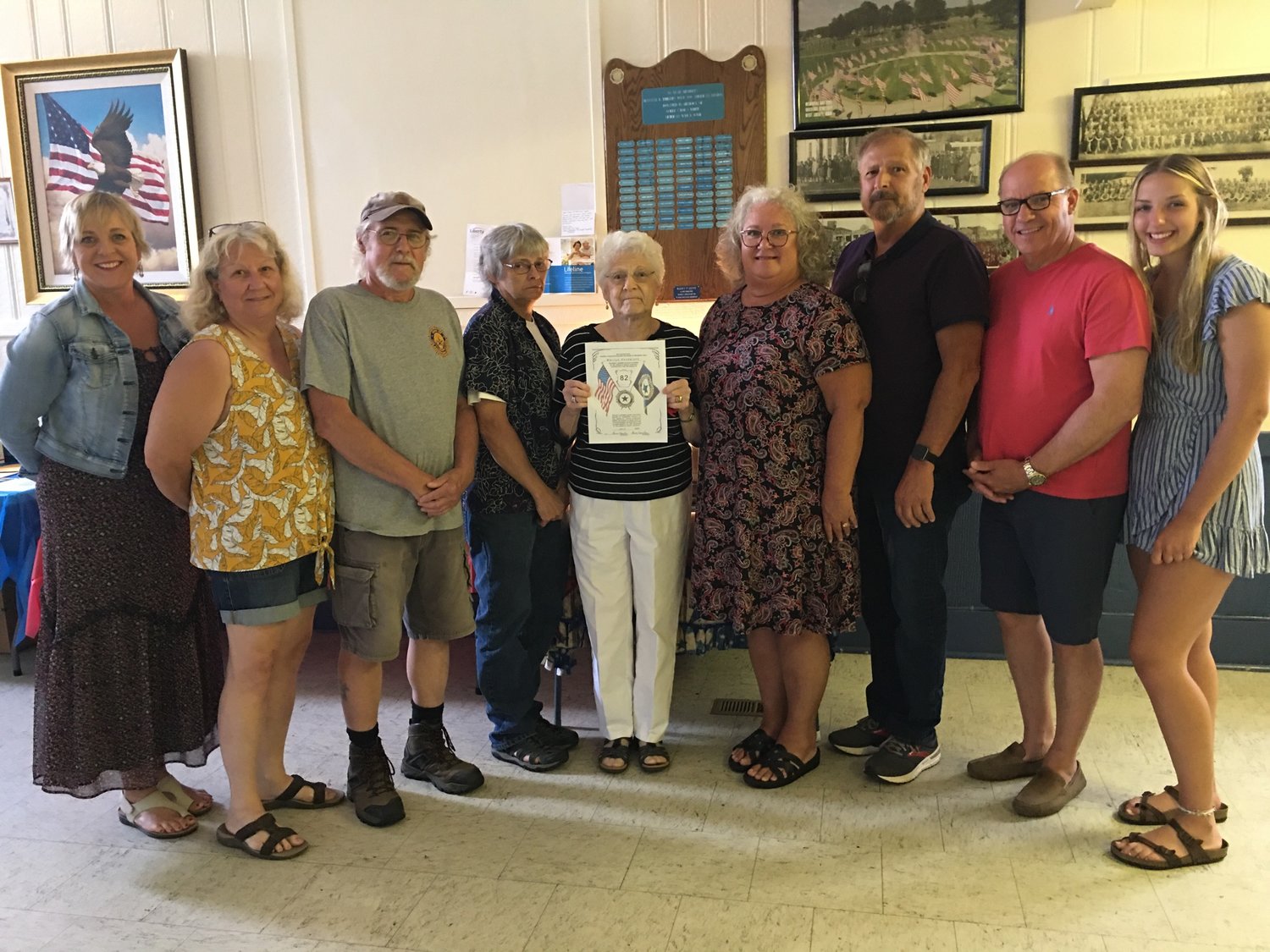 The West Liberty Mansell Phillips Unit #509 of the American Legion Auxiliary celebrated its 100th anniversary on June 12 at Legion Hall with 51 members, family, and friends in attendance.

Unit President Gwen Kessler welcomed the crowd. The ceremony began with Unit Chaplain Deb DeVore and member Holly Mathias draping the 1922 framed charter. At the time of the signing there were 44 members.

In the Legion auxiliary, it is customary to drape the unit charter following a member’s passing. The crepe of black used is an "expression of the sorrow to our hearts and the meaning of the unit of ever its great love." The draping Sunday was for all the members we have lost over the years.

Devore presented a very informative short history of the unit from its first 70 years or so.

This accounting was written in 1997 by members Lois Schermerhorn and Josephine Webb. Later, Kessler spoke of Mansell Phillips, for whom the Legion is named. Phillips’s family came to West Liberty from Madison County. He worked as a city mail carrier, then as a ticket agent for the railroad. He joined the military and fought in France during World War l, and was killed in action in October of 1918, at the age of twenty-five.

His body was returned from France to his parents in Peru, Iowa, where he was later laid to rest with a brief solemn service by the Masonic Order. Members of the auxiliary and the Women’s Relief Corp attended the service. He was the first soldier from West Liberty to lose his life in the war. Of note, the Mansell Phillips American Legion Post #509 celebrated its 100th anniversary in 2020, having been organized and chartered two years prior to the auxiliary, in June of 1920.

DeVore and Mathias next discussed some of the unit’s current projects. The Unit is collecting and donating items to the VA Hospital in Iowa City. The list describing the items desired is available from any unit member, and includes such items as: new clothing, prepaid cell phone cards, bus passes, puzzle books, gift cards for gas, food, restaurants, vets canteen services cards, hygiene items and more. Cards signed by well-wishers also mean a lot to our veterans. Simple messages such as "Thank you for your service" and ‘Thinking of you’ are recommended.

The unit also participates in the Pocket Flag Project, providing small flags for active military to carry with them. After folding and packaging the flags, they are put with a card and a note saying "A flag for your pocket so you can always carry a little piece of home. We are praying for you and we are proud of you. Thank you for defending our country and our freedom" and then mailed out. The pocket flags serve as "a pocket full of home, hope, love and support."

The unit also participates in "Packages From Home." This is part of a non-profit organization whose mission is to send care and comfort packages to deployed American military heroes stationed in active duty theaters around the world.

Some of the items especially appreciated by the military receiving these packages are snacks like pop tarts, crackers, chips, beef jerky, non-melting candy and trail mix, all in packaging that isn’t easily crushed, and drink mixes in single-serving packets; necessities such as sunblock, lip balm and socks; puzzle books and playing cards; and as a personal touch to show your support, enclose an encouraging note and/or a photo from home.

DeVore mentioned that baby wipes are especially in demand right now. And the unit is always accepting donations to help purchase these items.

The unit collects coupons, mostly from Sunday newspapers. If you have any to donate, contact any unit member. These are sent to our military overseas.

Every Christmas the group participates in the Star Tree program, sponsored by Aquarius Club, at the West Liberty State Bank and MidwestOne Bank. In 2021 they donated 46 gifts.

In May the unit participates in Poppy Days, distributing collection cans to local businesses, and for one weekend in May the members offer poppies in person at Jeff’s Market, Fred’s, West Liberty State Bank and more.

This year over $1,200 was collected from the poppy drive, the largest amount ever.

Mathias said the unit continues to operate the Loan Closet. Items such as wheelchairs and walkers and other sick room equipment are loaned free of charge to any resident. All that’s asked is when they are done using it that they donate the equipment back.

The unit works with the American Legion and Sons of the Legion members for the annual Memorial Day and Veterans Day services.

Refreshments of cupcakes, mints and punch were enjoyed by all. Evelyn Evans served punch, with Connie Neipert at the guestbook.

Table displays included photo albums and newspaper clippings from over the years, the unit’s original emblem lamp (used for initiations and other special occasions) and gavel, both circa 1922, and other memorabilia.

Marilyn Henderson’s four children, daughter Dee, son's Jeff, Mark and Scott, were there in honor of their mother’s 82 years of continuous membership. They surprised her with their attendance.

The unit currently has 42 members. The most recent addition is junior member Hadley DeVore, who will turn three soon. Hadley is the daughter of Cody and Joni DeVore of West Liberty.

It was announced the annual Flag Burning ceremony is planned for Flag Day, Tuesday, June 14, in West Branch.

There is a flag disposal receptacle in front of the West Liberty Legion Hall for donations year around.

The next meeting of the West Liberty Legion Auxiliary is planned for Saturday, July 9, at 9:30 a.m. at the Legion Hall.

Contact Deb DeVore at 319-530-4897 for more info on any of the projects listed above. New members are always welcome to joine the unit.