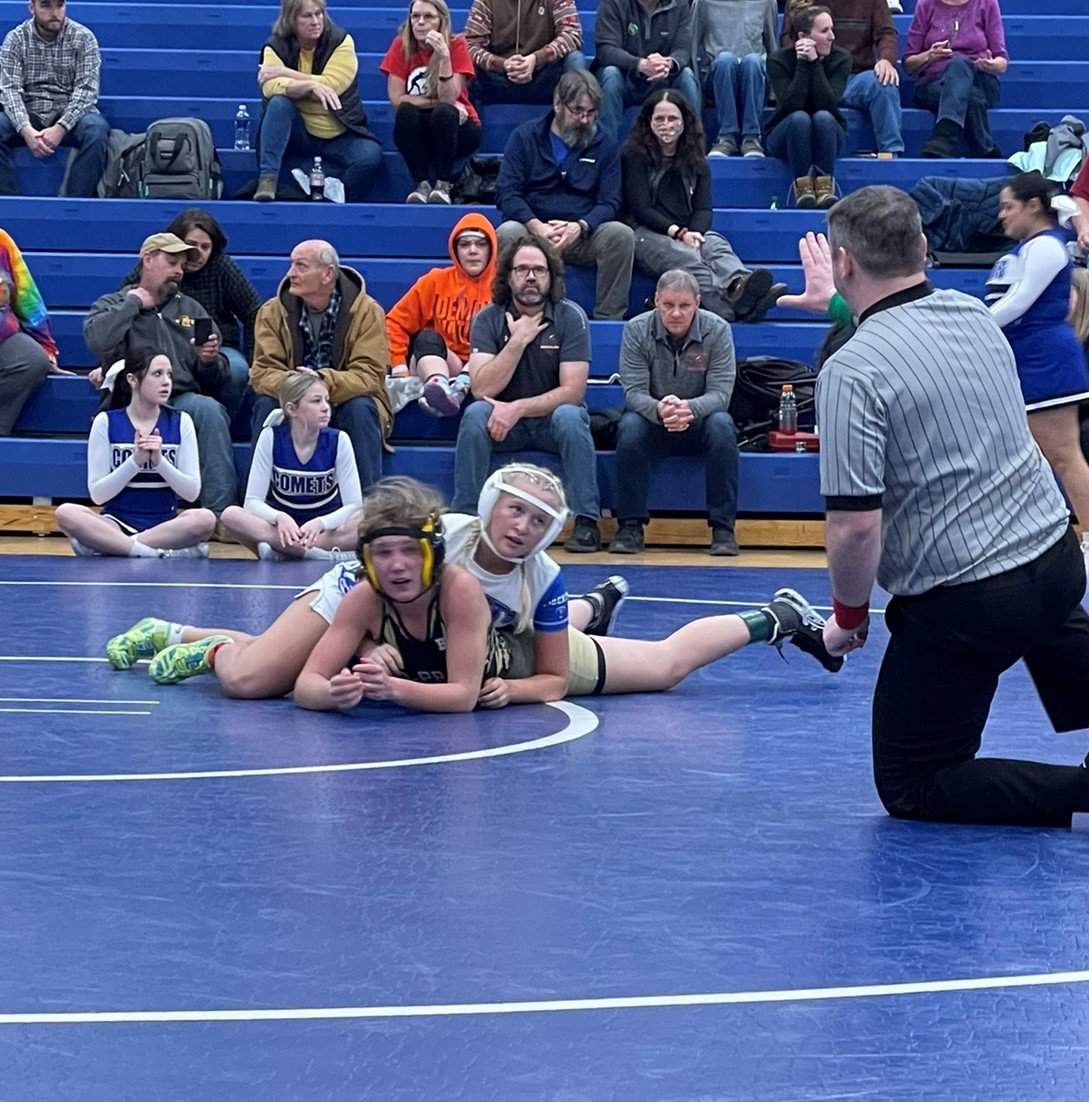 The West Liberty Comet girls wrestling team began last week with an all-girls tournament at Anamosa High School on Monday, Jan. 3. The squad competed with over 225 girls from 42 other Iowa girls teams.

The Comets sent nine ladies to Anamosa to compete in the highly competitive tournament and the team did not disappoint.

On Thursday, Jan. 6, both the West Liberty Comet boys and girls teams ventured to North Cedar High School to compete in a River Valley Conference triangular that included the host Knights and Monticello. The Comet boys disposed of Monticello rather easily by a 54-30 score in their opening dual and went on to throttle North Cedar by a 78-6 score.

Leading the way for the Comets Thursday at North Cedar were Quintyn Rocha and Joshua Zeman with two pins each. Colin Cassady, Bryson Garcia, Joe Barten, Jahsiah Galvan and Joe Akers each had one pin apiece. The Comets were recipients of three forfeits against Monticello and a whopping ten against North Cedar, thus the lopsided outcome.

With the two dual victories, the Comets ran their River Valley Conference dual record to 8-0. On the girls’ side, Morrison, Beaver and S. Garcia Vasquez all competed in tenacious matches without victories for the Comets in each of their respective bouts.

No team scores were kept in the early session, but the Comets battled in every match that they stepped on the mat in. For the girls, Sanchez (2-1), S. Garcia Vasquez (1-1), Laney Esmoil (2-1), D. Garcia Vasquez (2-1) and Evans (2-1) all placed second. Morrison (1-2) and Maelyn Wainwright (1-2) gutted out tough third place finishes while Beaver and Stagg hung close with their opponents for fourth place finishes. Jonathan Cardona (2-1) secured a first place finish for the JV Boys team, while Alexis Michel (2-1) wrestled to a second place medal. Tytan Griffith (1-2), Morgan Lehman (1-2), Andre Puentes (1-2), Evan Beal-Henderson (1-2), and Adrian Frausto (1-2) all captured third.

The boys varsity squad saw two of its members reach the championship round when Colin Cassady and Drake Collins won their semifinal matches to vie for individual titles at 106 and 170 pounds. In the most recent IAWrestle rankings, Cassady is ranked 8th and Collins is up to third.

After a 1:40 pin and his 6-0 semifinal victory, Cassady dropped his final match by fall to Union’s Jace Hedeman to claim his runner-up placement.

Collins wasted little time all day, winning all three of his matches by fall. A quick 1:47 opener, an even quicker :34 semifinal pin and a rapid 1:15 fall over Ben Brushaber of Dallas Center Grimes allowed Collins to secure his gold medal and the lone Comet championship. Wrestling at 195 pounds, Jahsiah Galvan went 4-1 in a bracket that included returning state champ and top ranked Wyatt Voelker of West Delaware, to place third.

The only other place winners for the Comets were 182 pounder Felipe Molina who went 3-2 to place seventh and Quintyn Rocha at 285 who went 2-3 to earn sixth place. Asael Negrete, Ryker Dengler, Bryson Garcia, Joshua Zeman, Preston Daufeldt, Joe Barten and Joe Akers all wrestled hard throughout the day.

As a team, the Comets finished in eleventh place with 101 total points. West Delaware cruised to the team title with 224.5 points followed by Don Bosco in second with a distant 181.

Coach Ian Alke said after the meet, "Our kids were eager to get back on the mat after the holiday break. We are still fighting injuries and Covid related issues. It will be good to get everyone back and healthy as we enter the final push of the season. The Benton Bobcat Jerry Eckenrod tournament was, in my opinion, the toughest tournament held in the state of Iowa last Saturday. Colin Cassady wrestled phenomenally there, maybe the best I have seen him this season and Drake Collins has really stepped it up and is wrestling like a top ranked kid with a purpose. I am proud of the fight that all of these kids are showing"

On Thursday, Jan. 13, the Comets along with Camanche, will make the trek to West Branch for another River Valley Conference triangular beginning at 6 p.m.. Rounding out the week, the varsity boys will compete on Saturday, Jan. 15 at Solon’s Ed Hadenfeldt Invitational beginning at 9:30 a.m.and the girls and JV boys with be at the Independence Invitational Saturday beginning at 9 a.m.