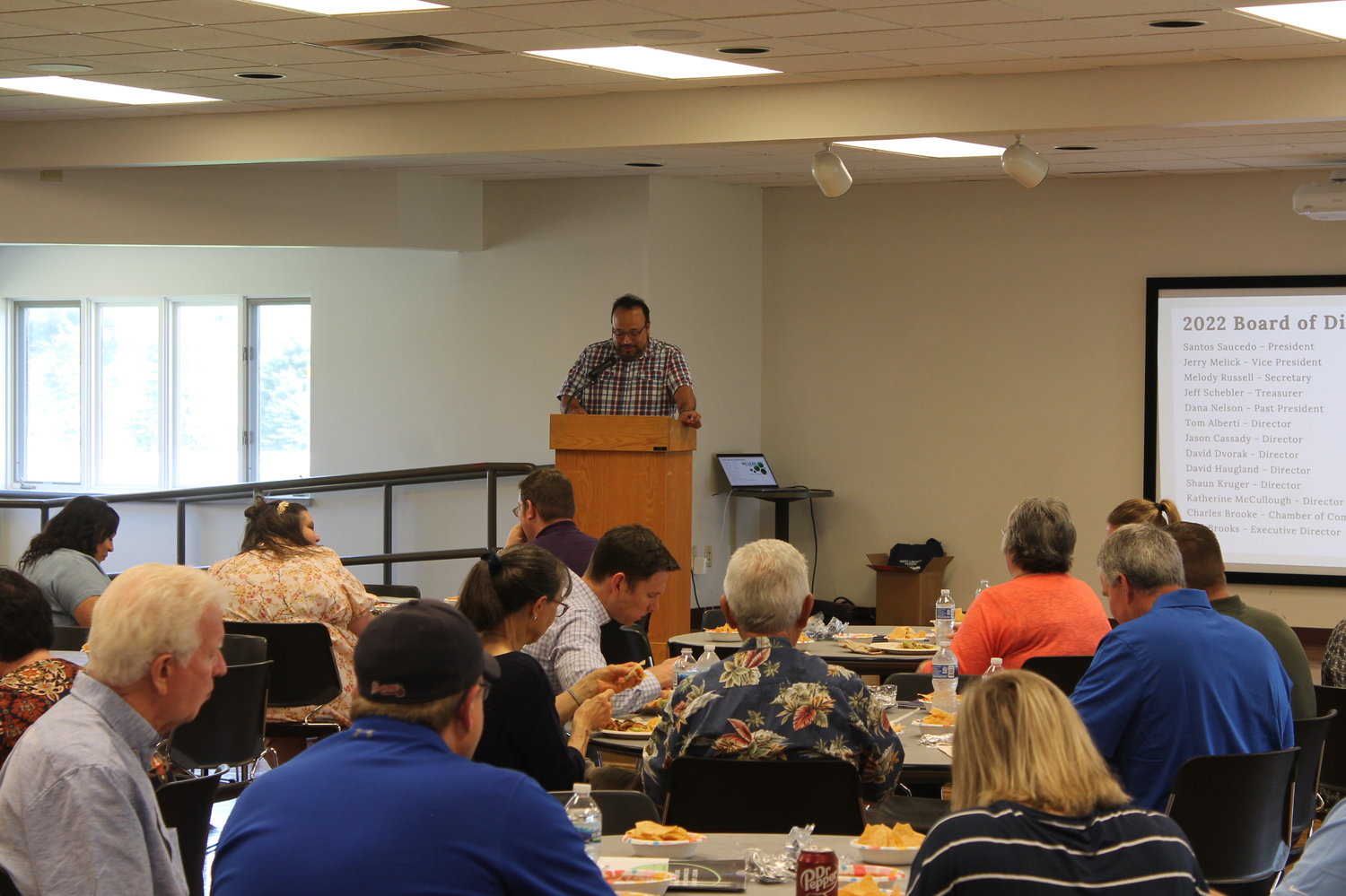 WeLead Board President and Muscatine County Supervisor Santos Saucedo talks about where he sees the future of the non-profit going for 2022 and 2023 at the annual meeting on Friday, May 13.
Index photo by Xiomara Levsen
Posted Wednesday, May 18, 2022 12:49 pm
Xiomara Levsen, Index Co-editor

WeLead, West Liberty Economic Development Group, held its first annual meeting since before the pandemic at the community center Friday, May 13, with a packed agenda.

“One of the biggest things I will mention about our WeLead is that we are passionate about our commununity,” Saucedo said. “If we didn’t, I don’t think you would see the success that we have on this board.”

As president, Santos told attendees he challenged his team members to think about where they will be a year from now. During the pandemic, his team had to adapt and meet by Zoom. Now with West Liberty Foods applying for a USDA grant of $25 million, building 500 homes and receiving $261,000 in grants already at WeLead he said they keep focused.

The next project WeLead will focus on is childcare, Saucedo said.

WeLead will speak with not only West Liberty Foods but also the smaller businesses in the area to see what their childcare needs are.

“It is not just one business that is West Liberty and WeLead it is all those businesses and having the same interaction out and having Charles [Brooks] on the board, which is great,” Saucedo said. “I love his enthusiasm and his fire and that has continued collaboration.”

Another thing West Liberty does well is be inclusive.

“Everybody just wants to feel included and nobody in Muscatine County does that better than West Liberty,”Saucedo said.

A Mexican bakery just opened and now a Puerto Rican bakery will be opening, which will add more diversity to the city, he added. Other communities are jealous of the diversity they’re seeing in here.

The goal for WeLead is to continue to create change so the generation of tomorrow is happy to have what this generation did for them, he added. He invited people to join WeLead to help make the changes for future generations.

Brooks followed Saucedo with his Executive Director report. He started with a summary of what WeLead did in 2021.

The group also established their quarterly business meetings organized and sponsored by West Liberty Foods. At the end of the year, WeLead provided and organized funding for the West Liberty Police Department's “Shop with A Cop.”

“We’re only halfway into 2022 but in case you haven’t noticed we’re not big into sitting around,” Brooks said. “The people of West Liberty and the surrounding area deserve the very best possible place in which to live, work, learn, play and grow and the team at WeLead is here to make that happen.”

317 Spencer Street received a $200,000 grant from the Iowa Economic Development Authority, Brooks said. This will create two apartments upstairs and a brand new commercial space on the ground floor. It was one of the very first brick buildings built in West Liberty.

“And I’m personally extremely excited to see it restored to its former glory,” he added.

“WeLead assisted in this planning and it's extremely exciting,” Brooks said. “This project is going to benefit residents and it’s going to attract all kinds of guests in town.”

A $200,000 zero-interest loan was applied for by WeLead on behalf of the city to demolish the former tire-shop on Columbus Street. Five apartments with commercial space below are planned on being built on that site, Brooks said.

“We’re currently involved in negotiations to fill this commercial space,” he added. “I can’t give out any details right now but get excited about what’s coming.”

Housing, of course, continues to be the priority. WeLead is taking a role in Muscatine County’s Housing and is working to bring more housing to Nichols, Atalissa and West Liberty, Brooks said. They are working with the developers of the Buysee subdivision to bring 43 new homes to West Liberty and on

the Short Street expansion, which will add 24 homes.

A $100,000 Catalyst Grant was also applied for to help renovate 115 East Third Street into two apartments, event space and commercial space downtown, Brooks added. The projects Brooks spoke about were just a few of the ones WeLead is working on in 2022.

Brooks also mentioned WeLead’s partnership with the city’s government, West Liberty Foods and the need for childcare in the community. He also said the children in the community are the next generation and without them there wouldn’t be a future for West Liberty.

At the end of his speech Brooks had everyone pick up a pair of sunglasses on their table. He had them put them on and played a song. He said “the prognosis for the future is The Future is so Bright that We Wear Shades.”

At the conclusion of the Business Association's quarterly meeting on June 13, the following updates were provided:

Bill Koellner reported that in the near future the Depot Museum will be certified as a building in the National Historic Registry. St. Mary's Catholic Church in Nichols will also receive the same status.

Saucedo, a county supervisor, shared that upgrades to the Muscatine County Fairgrounds in West Liberty are in the works. This should occur this year or next.

Ed Moreno said that on Memorial Day week there will be an internationally known muralist at the Gentle Dental Office on Route 6, open for the public to witness.

Moreno also mentioned local grants are now available in several categories, and anyone interested should go to the West Liberty Community Fund website, which is a layer of the Community Foundation of Muscatine

City administrator David Haugland shared that the public pool at Kimberly Park will be opening Memorial Day weekend. Also, a mini court will be built at Wapsie Park this year for basketball, pickle ball, soccer and other similar sports. Park director Nick Heath is in charge of the project, creating a new recreational avenue in the city for a third straight year.

Fair director Kelsey Meyers reminded those attending of the upcoming WMT Tractorcade June 12-15 at the fairgrounds. She also spoke of the annual "Weekend for the Fair" fundraiser on Saturday, June 4, which will include harness racing in the afternoon, followed by a variety of children's activities, a dinner, silent and live auction and much more to be held at the Midway Pavilion on the fairgrounds.

Attendees also heard about the upcoming West Liberty Fine Arts Booster Club/Rotary Club GALA to take place on the evening of Saturday, June 4, at the Community Center. Tickets are available for the event which will include a live and silent auction and other entertainment including a performance from the West Liberty High School Mariachi Band.

The luncheon meetings are sponsored by West Liberty Foods.

Portions of this story were contributed by Phyllis Owen Sterba.