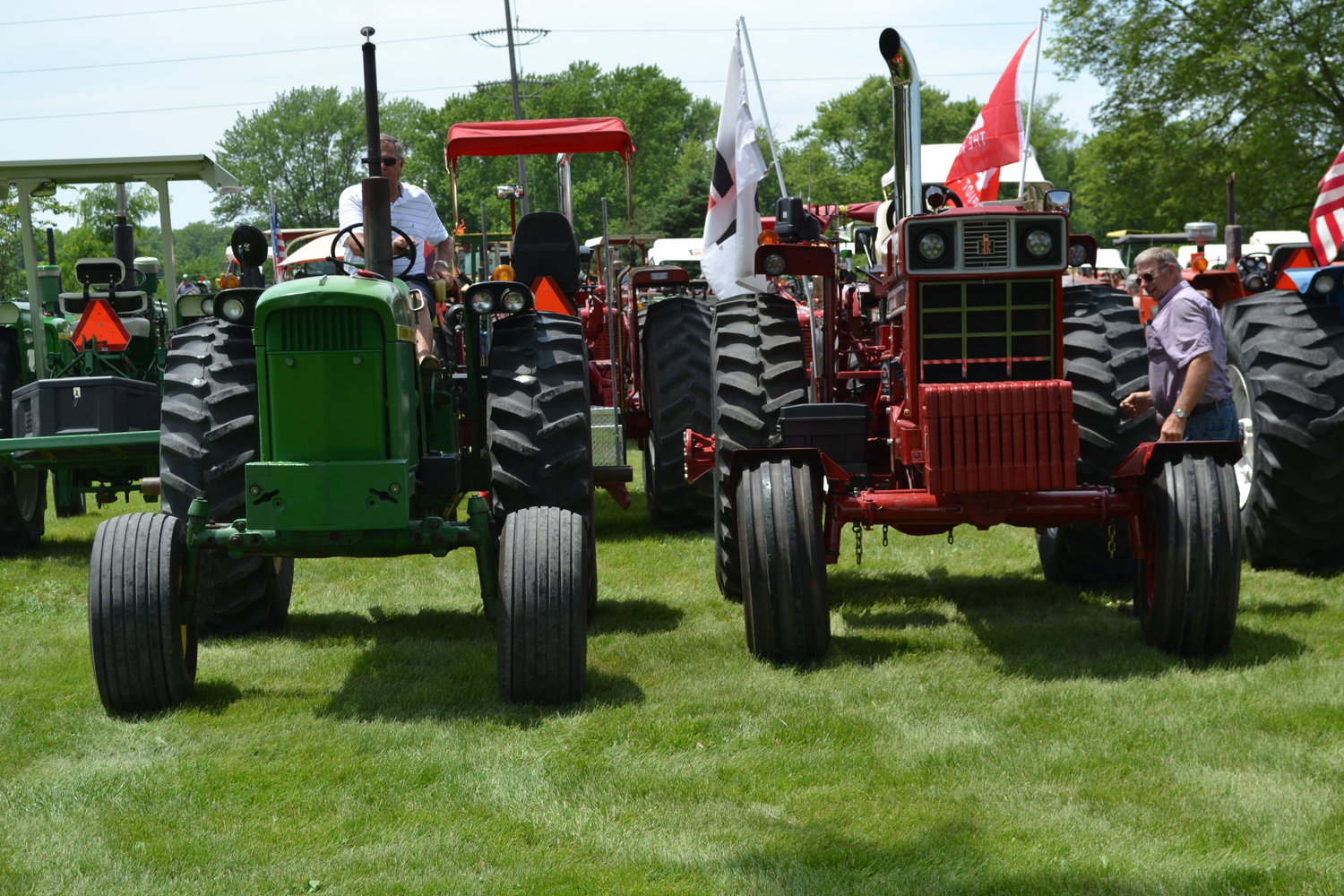 A first for West Liberty, tractor drivers parking their tractors at the Muscatine County Fairgrounds Sunday evening. Pearticipants came from as far as Michigan to participate in this year's Tractorcade despite temperatures being in the upper 90s.
Index photo by Xiomara Levsen
Posted Wednesday, June 22, 2022 10:32 am
Tim Evans, Index Editor

“It was everything we expected.”

Meyers said the event “went great” as an estimated 400 tractors and more than 400 drivers (some had more than one driver) turned out for the event that gathered on Sunday, June 12 at the fairgrounds and then drove designed routes to neighboring communities through the next three days, ending Wednesday, parading the tractors through towns in all directions and making special stops along the way.

She said each route seemed to flow nicely thanks to special police escorts and traffic patrols by the Iowa State Police, County sheriff officers and the West Liberty Police Department.

“They were all great to work with,” said Meyers.

The event not only spotlighted West Liberty and it’s historic fairgrounds, but served as a fundraiser for the fair, board members feeding about 300 at noon on Sunday in grilling hot dogs, hamburgers and bratwurst and another 300 that evening, featuring marinated turkey. On Wednesday, as the event concluded, the board served steak sandwiches to around 350.

Meyers said Monday and Tuesday gave Tractorcade attendees a chance to “explore the community” in finding places to eat and shop.

She said Tractorcade organizers said they “definitely want to come back” to West Liberty, although the event is rotated throughout Eastern Iowa. Meyers said the heat had little effect on Tractorcade participants, pointing out only a few held back from riding in the parade because of the high temperatures. She said most were prepared for the hot weather and Tractorcade officials had water stations set up each day.

“They were great people to work with,” Meyers said. “We were very thankful to be a host. It was a great time.”

Meyers said about 40 participants also took advantage of the fairgrounds campgrounds during the event.

Weekend for the Fair

Meyers went on to say the annual “Weekend for the Fair” fundraiser held June 4 raised what the fair expected to raise, thanking those from throughout the county and community who participated.

She said the harness horse racing again was a big hit with families and many who attended the races early in the afternoon came to the Midway Pavilion to participate in the silent auction and dinner, which included ribeye sandwiches grilled by fair board members.

She said items went well in the live auction conducted by Donovan Yoder and appreciated all the support from donors and businesses.

Many of the same popular events will be back at the fair again this year according to Meyers, but one of the big draws looks to be Saturday night’s feature performance of “Sawyer Brown,” the popular country band that the fair manager said is producing record ticket sales already. “We’re really excited about having Sawyer Brown. They’re very popular here in Iowa.”

The fair opens on July 20 with late model car races before the grandstand and the annual fair queen contest in the grove area between the Midway Pavilion and the Horticulture and 4-H centers. Attractions follow Thursday evening with Impact Pro Wrestling, followed by the Midwest Tractor Pull on Friday evening.

There is a full slate of activities on Sunday beginning with the demotion derby featuring a new promoter at 11 a.m. which will feature a new mini-van class, followed at 1:30 p.m. by the Log Hogger Auction at the grandstand, where dozens of chainsaw cut pieces will go on the auction block. That event will be followed by the popular Trailer Races at 3 p.m., where local participants pull trailers through a figure eight in hopes of not getting in a wreck in a non-top competition.

The fair concludes with a Latino band playing in the beer garden area of the Midway Pavilion from 4-8 p.m.

Meyers said the popular “Kid Zone” free play area will also be back this year at the fair and will feature new swing sets. The Muscatine County Cattlemen’s Association have also built a new winner’s picture wall near the beef show pavilion honored Bryan Dobbins, which will be unveiled this year. For more information on the fair, go to Muscatine County Fair on the Internet.