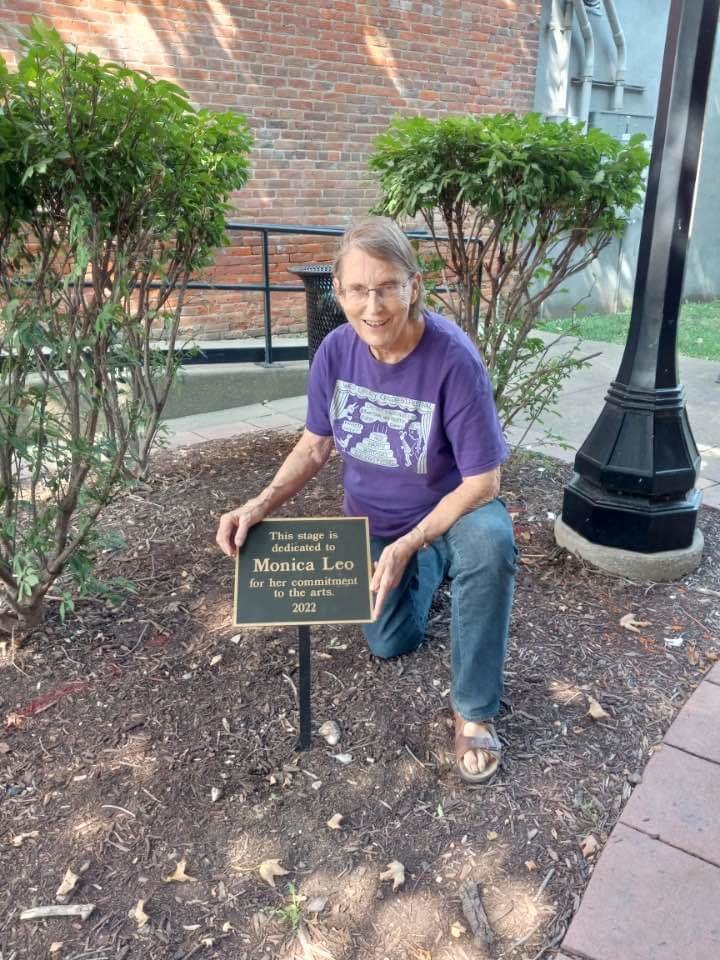 During the Great Plains Puppetry Festival, a community member was honored for her years of involvement in the local arts.

Monica Leo had the stage at Ron-De-Voo Park dedicated to her at the beginning of the Puppet Slam Friday, Sept. 9.

“I was stunned,” Leo said. “I did not expect it. I had no idea it was coming, it seemed like everybody else knew about it.”

Stephanie Vallez announced she and several people had been working on this honor for a while. The suggestion of dedicating the stage to Leo from a puppeteer in St. Louis that came up to West Liberty every year, Leo said.

Vallez took the puppeteer’s suggestion and ran with it. Vallez told Leo the reasoning behind the dedication was because Leo was part of the group who decided to turn Ron-De-Voo Park into a performance space.

There were a lot of doubts from people in the community as to whether or not the park would work but Leo pressed on with the idea, she said. Before, the space was full of broken bottles and trash.

“I thought ‘I’ve been around kids enough to know that if you make something nice most of them will keep it nice,’” she said. “So I said, ‘Let’s go ahead and do it because once it’s nice kids will keep it nice.’ And they have.”

Since Ron-De-Voo Park has been turned into a performance space Leo said there really haven’t been any problems with it being trashed like before, Leo added.

A plaque dedicating the stage to Leo now stands in the park.

“It’s there and apparently nobody in town minds as far as I can tell anyway,” Leo joked.

I didn’t know whether to be more touched or embarrassed. We puppeteers, we don’t want people to look at us, they’re supposed to look at the puppets.”

When asked what she would like to tell the West Liberty community Leo quickly answered by saying “thank you.”

Leo said many of the puppeteers who came to the festival told her they couldn’t believe the amount of support Eulenspiegel Puppet Theater Company receives from the community.

“We are very fortunate to have that,” Leo added.