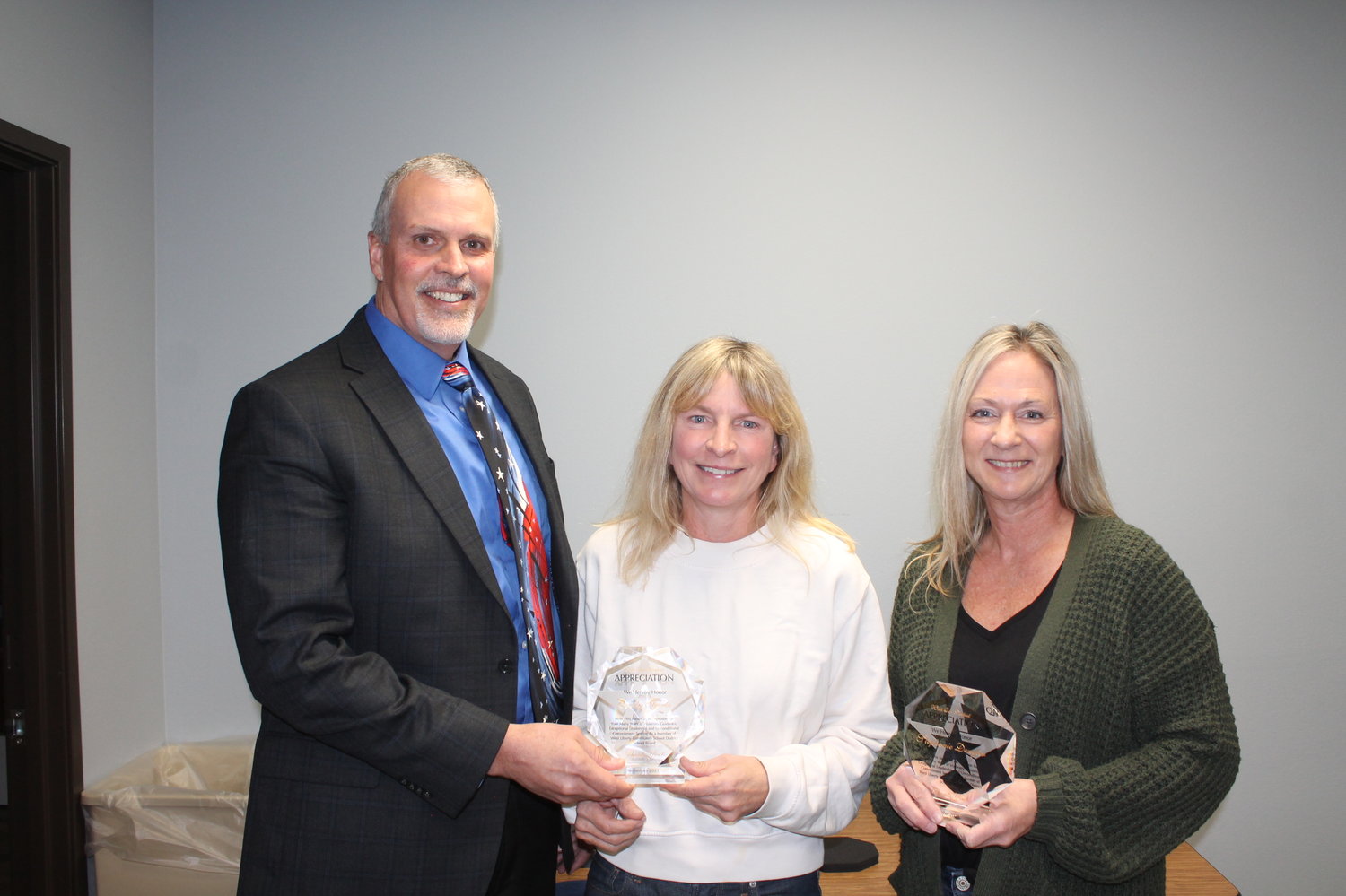 West Liberty Community School District Superintendent Shaun Kruger presents honors to Emily Geertz (on left) and Stephanie Dengler for their years of service on the board of education.
Index photo by Tim Evans 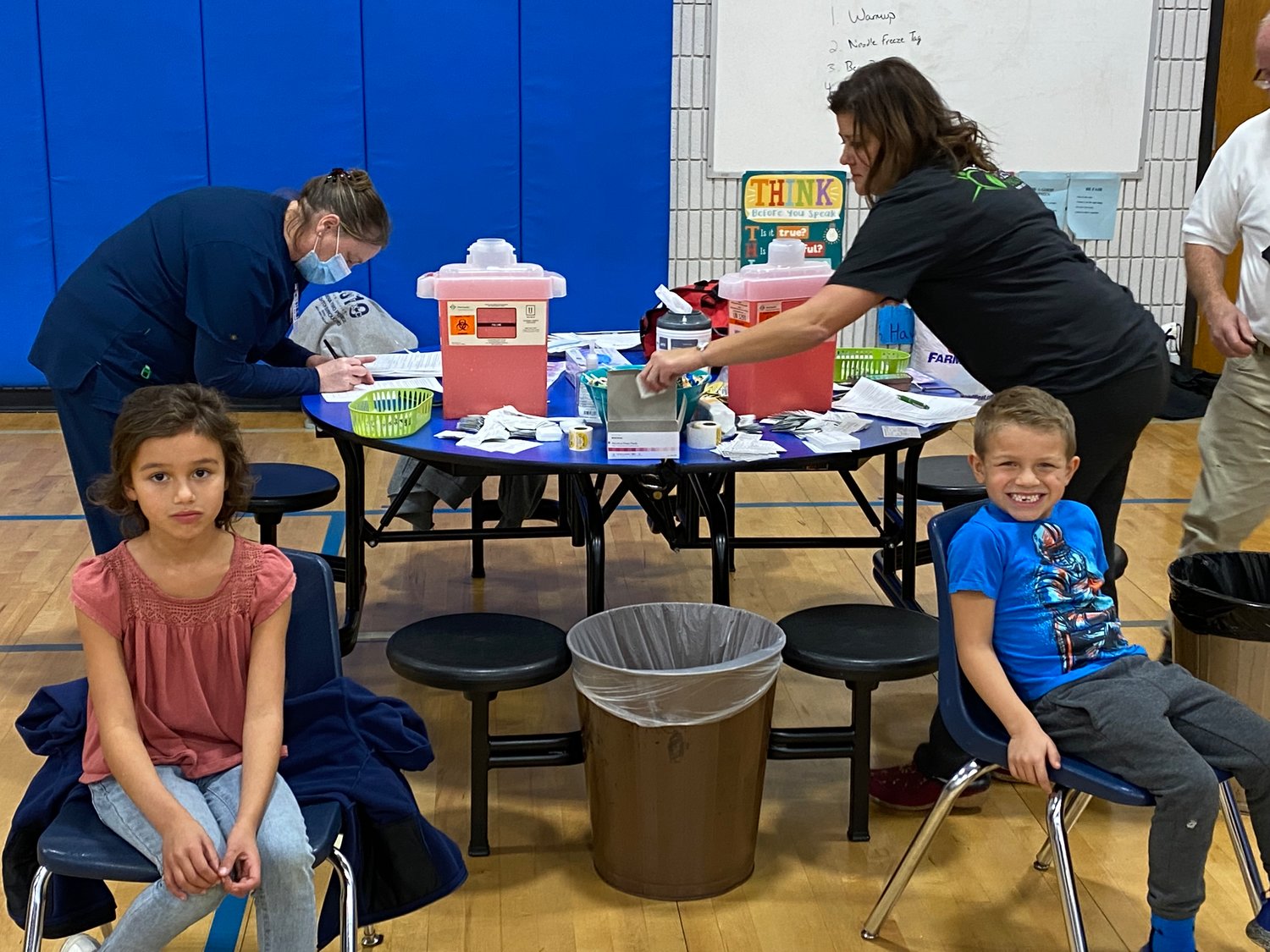 The West Liberty Community School Board of Education reorganized Monday, Nov. 15 with two meetings, the first saying thanks to two outgoing board members while the latter session welcomed two newcomers.

Board president Emily Geertz and board member Stephanie Dangler were honored for their respective eight and four years of service to the board before Rebecca Vargas and Ed Moreno were sworn in as new four-year members of the board, promising to do their best for the school district.

“This may sound crazy, but I actually had fun,” said Geertz, pointing out she made a lot of good friends with district personnel and learned a lot about the school system as she worked through hiring three different superintendents during her tenure.

They both were presented special plaques for their service to the district from Superintendent Shaun Kruger, who pointed out the pair devoted a lot of time and energy to the volunteer position. Their work included the development of a district building plan that is still in the works – starting with moving the bus and maintenance facilities to Liberty Park into a $1.2 million facility that extended to a $2.5 million classroom addition to the West Liberty Middle School that opened just a week earlier to fifth grade students moved from the Elementary School. The district is in the planning stages of an expansion at the Elementary School, where the district is considering building a new Early Learning Center to the north end of the building and moving all preschool and kindergarten students to the buildings.

Moreno, a retired civil engineer and promoter of his family’s West Liberty business, Gentle Family Dentistry, is highly involved in the West Liberty Youth Dream Catchers organization as well as the local chapter of the League of Latin American Citizens.

Vargas is an acadeic advisor at Muscatine Community College and has worked in West Liberty schools in the head-start and as a community liason working for United Action for Youth. She has students in the school system.

Vargas had the most votes according to official documents from Muscatine County Auditor Tibe Vander Linden, collecting 387 of the 1,367 votes cast. Moreno had a total of 256 votes while late-entry write-in candidates Emily Daufeldt and Jaime Parizek had 319 and 289 votes respectively. There were also 16 votes certified as “scrambled,” meaning the ballot was ruled invalid due to an error by the voter.

In that same Nov. 2 election, district voters approved a resolution to continue a public tax measure to fund district improvements, passing 470 to 247.

Jake Burroughs was named the new board president while Carla Shields was named to the vice president position. The board decided to keep their first and third Monday meeting dates at 6 p.m. at the district board meeting room at the District office of the Superintendent of Schools.

The West Liberty Index was renamed the official newspaper of the district and district attorneys, Jim Sweeney & Associates, were renewed as well as depositories West Liberty State Bank and MidWestOne Bank, each given limitations on deposits.

The wellness committee will be composed of Ed Moreno and Carla Shield while Moreno was appointed to the Muscatine County Conference Board and Superintendent Kruger to the West Liberty Chamber of Commerce. Appointment of District 504 Coordinator was given to Middle School principal Vicki Vernon and the appointment of District Equity Coordinator was given to high school assistant principal Kyle Steffen.

Appointment of Level 1 Investigators was awarded to Stephanie Paulsen and Russ Hughes and Level 2 Investigators would include district attorney Jim Sweeney & Associates. Appointed as Title IX Coordinator was activities director Adam Loria while Ed Moreno was named as an Iowa Association of School Boards delegate.

The district approved a change order for late work in the new Middle School addition for $3,121 to Peak Construction of North Liberty who subcontracted some drywall finish work and nearly $1,000 in materials to River Valley Construction of Bettendorf.

The board also approved an overnight trip for the girls' varsity basketball team on Dec. 3-4, taking part in an tournament in Johnston near Des Moines.

The district set their next board meeting for Monday Dec. 6, beginning at 6 p.m. at the District Office of Education when the superintendent will provide a report and high school principal Brenda Arther-Miller will give an update on students “on track” for graduation in 2022.

There was also a presentation by Kelly Butcher at the meeting on the Gay Straight Alliance youth organization at the West Liberty High School. Please read more on what Butcher had to say about the group in next week’s Index.