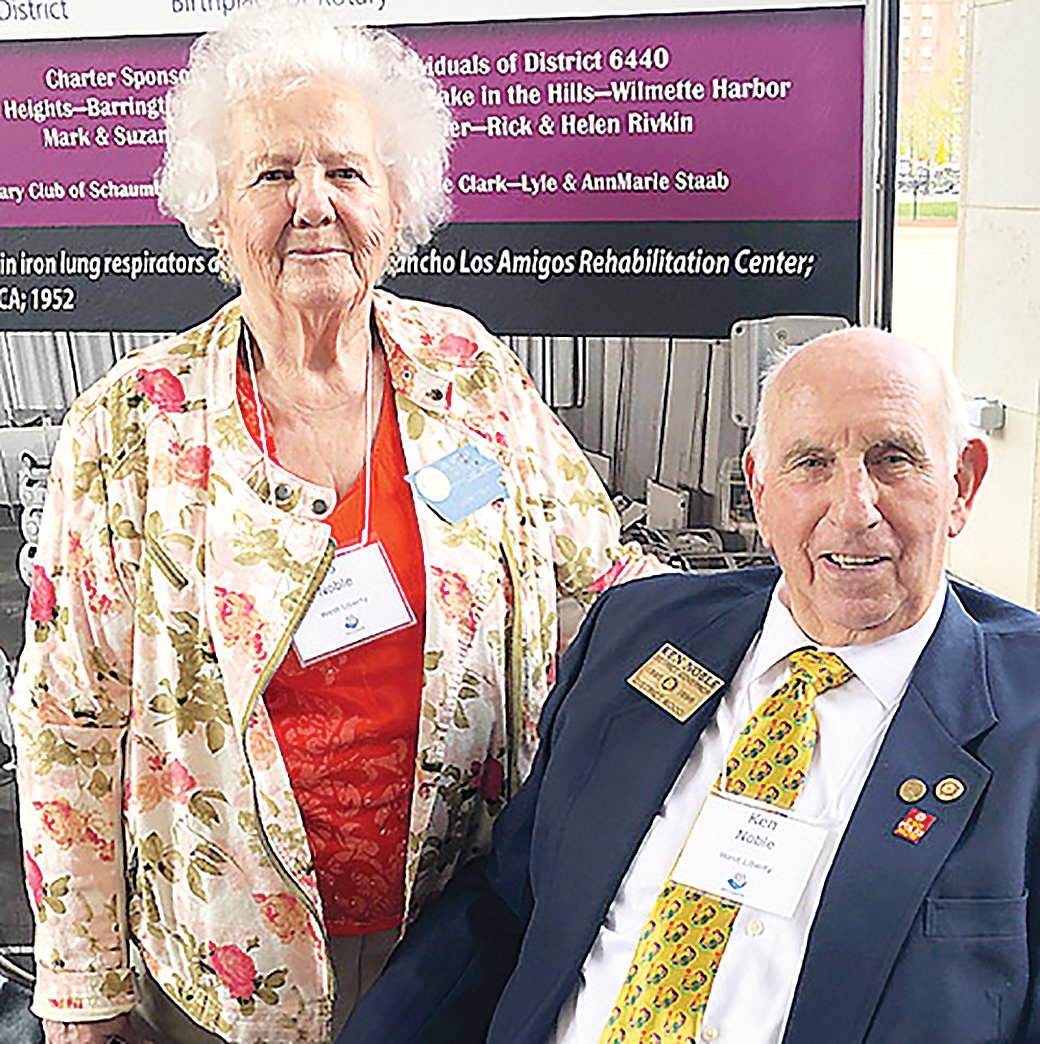 Jo and Ken Noble at a Rotary Convention this year. Ken and his wife traveled to three continents to deliver polio drops to children to help the Rotary Club International's mission to eradicate the world of polio. Ken was recently awarded the International Service Award for his efforts.
Index photo by Bill Tubbs, North Scott Press
Posted Wednesday, June 8, 2022 8:27 am
Xiomara Levsen, Index Co-Editor

A Rotary Club of West Liberty member received an international award for his achievements in Rotary international’s efforts to eradicate polio.

Ken Noble, of Muscatine, formerly of West Liberty was awarded the International Service Award for A Polio Free World.

“Ken is one of the very few people that has been in multiple countries around the world and distributed life saving drops to young children and it’s with great honor of course that the district acknowledge people like that,” Koellner said.

Noble thanked Koellner for his efforts in nominating him for the award because without his effort Noble wouldn’t have received it.

“Being extra diligent and creating the recommendation letter for my receiving this award,” Noble said.

Rotary International split the award verdict in three ways. Europe and Africa, the Orient and the America’s.

“And I received one of the awards for the America’s,” Noble said.

Noble has been a member of the Rotary Club of West Liberty since 1979. He spoke about his involvement in the effort to eradicate polio at a club meeting in May to fellow Rotary members.

His wife, Jo, was sitting by his side and who is also a member of the club, traveled with him to help deliver the polio drops to children.

“We’ve been active in West Liberty for quite a while and an active Rotarian,” said Ken Noble said. “Jo and I have had many of those opportunities.”

He retired from the U.S. Department of Agriculture in 1988. After his retirement, he was able to participate in National Immunization Days in three continents.

He traveled with his wife to Mexico, the Philippines and traveled with 400 delegates to another polio immunization clinic around Dehli and New Dehli.

Koellner gave The Index a copy of his recommendation letter for Noble to receive the award.

“From the beginning of the Polio Plus effort, Ken was an ardent advocate throughout the district for giving to the polio fund,” Koellner said in his letter. “He worked particularly close with the District Governor, who led presentations to garner funds for the effort.”

Another reason why Koellner nominated Noble was because he worked with a lot of youth, even as a new member he shared the polio effort story with youth.

In 1994, he talked to Rotary Youth Exchange (RYE) students about what Rotary was doing to rid the world of polio and continued to do so for the next 20 years.

“A Polio Plus session was always a part of the required trainings for RYE students in the District thanks to Ken’s leadership and innovation,” Koellner wrote.

The efforts to rid the world of polio were often happening the exchange student’s countries or in countries they would travel to, he added.

“This made a huge and very personal impact on these students and their inbound and outbound parents, host parents as well,” Koellner wrote.