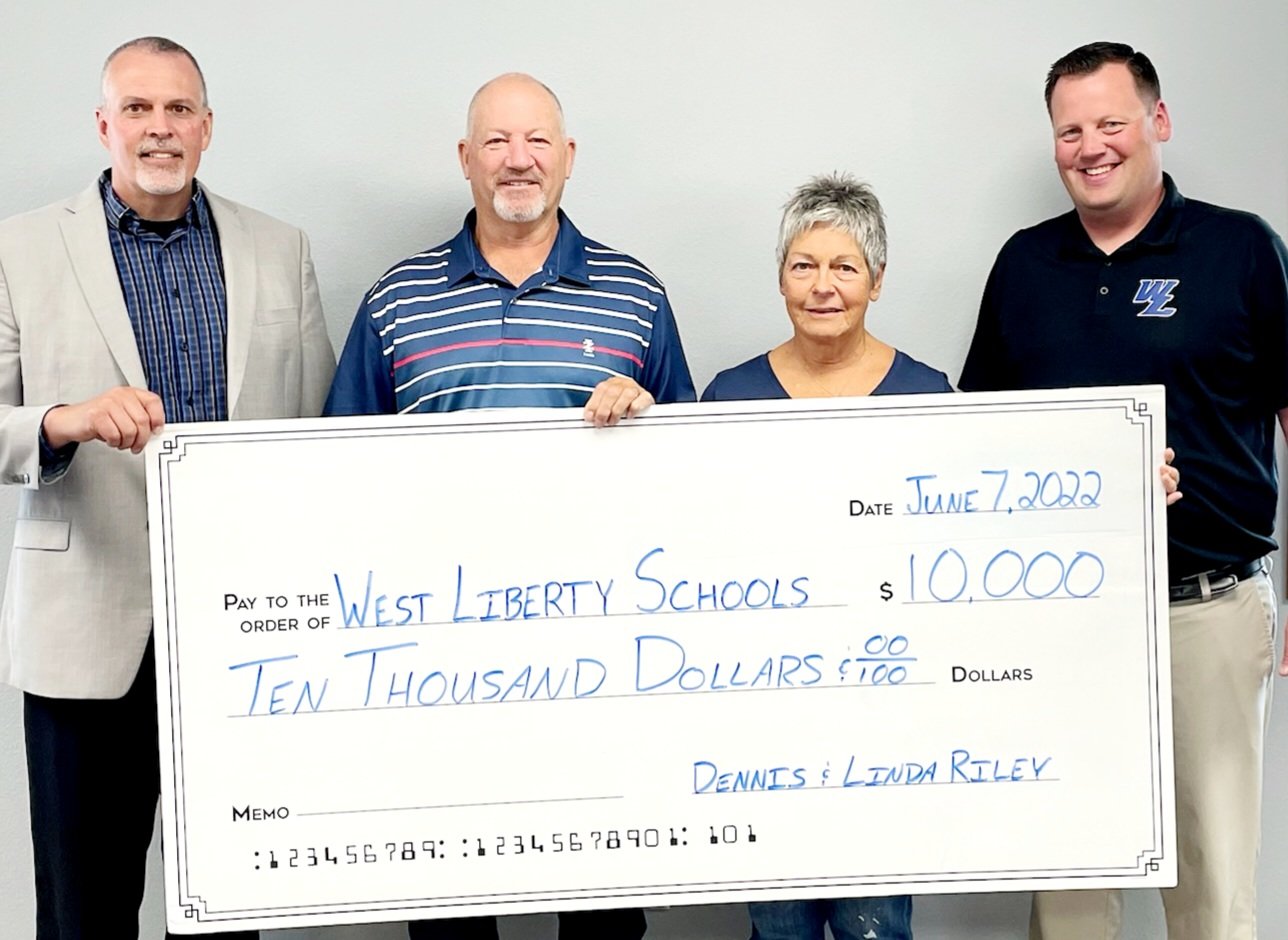 From left, West Liberty School Superintedent Shaun Kruger, Dennis Riley and Linda Riley, athletic director Adam Loria with the $10,000 the Riley's donated to the proposed WLHS athletic complex . Dennis taught math and physical education and coached several sports while his wife volunteered at the Early Learning Center and was the accompianist for the middle school choir. They met with Kruger and Loria to let them know they were going to donate to the athletic complex earlier this week.
Posted Wednesday, June 22, 2022 10:40 am

The Riley's lived in West Liberty for over 30 years until they retired to Arizona in 2017. Dennis Riley was a high school math and physical education teacher for West Liberty and coached football, girl’s track, girl’s basketball, softball, and cross country.

Riley was part of the coaching staff for the first West Liberty football team to make an appearance at the Dome.

The Riley's met with school administrators Adam Loria and Shaun Kruger during a recent visit to West Liberty.

“This is amazing,” said Activities Director Adam Loria. “Dennis has given so much to the district through his years of service and it’s awesome that he is still giving back to help West Liberty athletics.”

In 1983, the Rileys moved to West Liberty so Dennis could teach, and Linda took a job at West Liberty Foods holding many positions until her retirement 29 years later.

After retirement, Linda volunteered at the West Liberty School District Early Learning Center and as the pianist for the West Liberty Middle School choir. The Riley's came to West Liberty for a teaching job but stayed because of the community and all it had to offer.

“West Liberty was always home for us,” said Linda. “We loved the diversity of the community, and we were very involved in organizations outside of the school."

She said her husband was a member of the West Liberty Lions Club, served on church council, and helped raise over $120,000 for the first football field and track upgrades the school completed years ago.

"He had over 500 volunteer hours on the football and track project alone,” she said.

The Riley's have a love for track and continue to support the sport as USATF officials, officiating high school, community college, and college meets in Arizona.

With over 30 years of experience coaching multiple sports, this gift is a way for Dennis to give back and help future generations of Comet athletes.

“I want these kids to have access to facilities that we didn’t have for previous generations,” said Dennis. “We enjoyed our life in West Liberty, and I think this new complex will do a lot for the entire community.”

It is rare to have 30 plus years of service to one school district these days and it’s easy to see the benefit to the youth and community when someone commits the way the Rileys did for so many years.

“On behalf of the school district I’m honored to thank Dennis and Linda Riley for their gift,” said Superintendent Shaun Kruger.

“A teacher and coach that contributes as much as Dennis did is simply invaluable to a superintendent. There’s no doubt we he helped move Comet athletics forward when he was here and is now stepping up to help again. We are very grateful,” Kruger said.