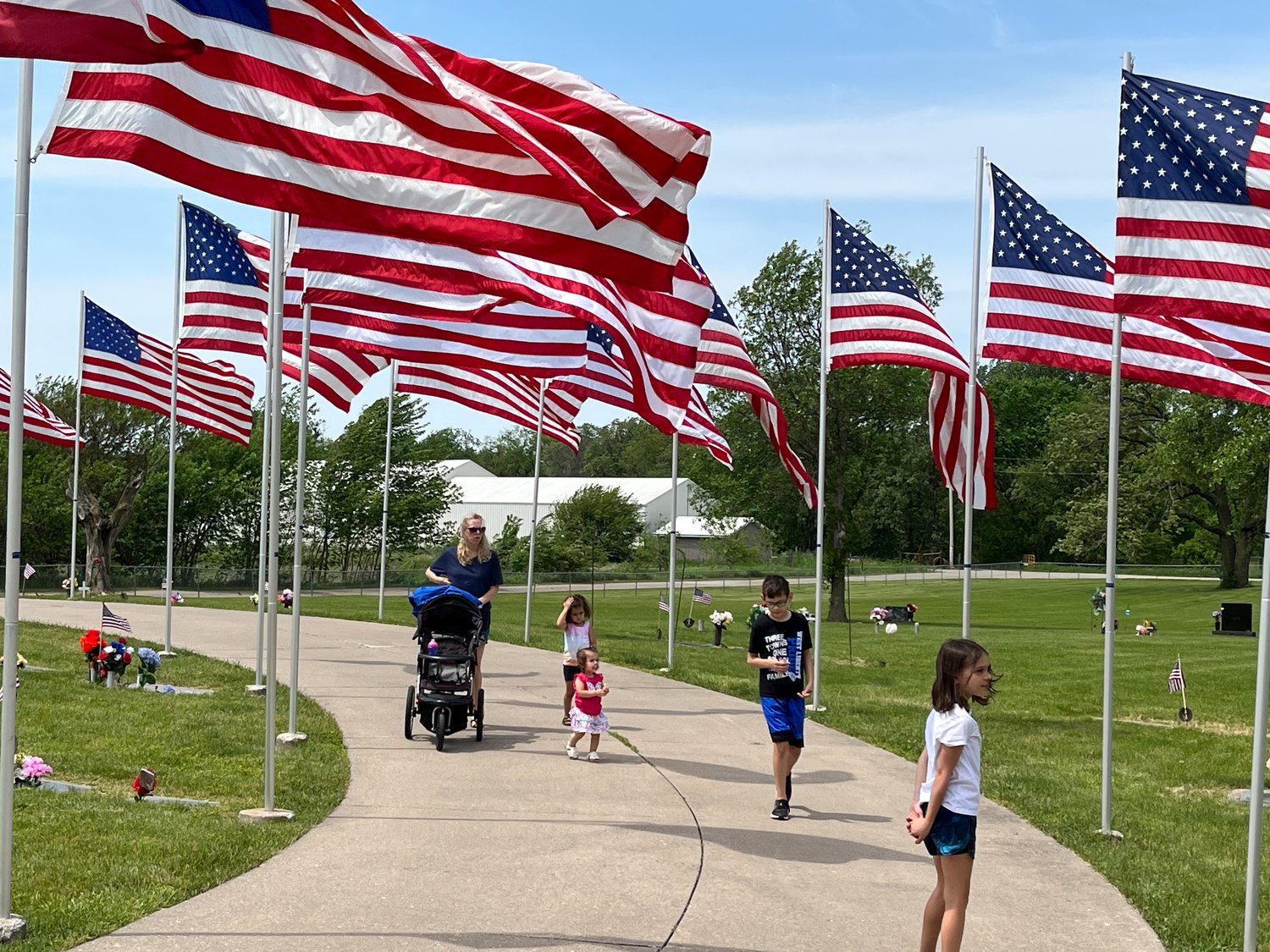 The Rollo and Jaimie Galvan family of West Liberty takes a casual walk through the Oak Ridge Cemetery identifying local military personnel including children Isaiah, Karli, Maeli and Gia as they walk through the Avenue of Flags after the Memorial Day Service Monday.
Index phot by Tim Evans
Posted Wednesday, June 1, 2022 9:57 am
Tim Evans, Index Editor

The cost of freedom continues to climb.

That was the statement of U.S. Army retiree Tom Wertzbaugher, the featured speaker at the West Liberty Memorial Day services held at the Oak Ridge Cemetery on Monday morning, as he talked about the price of freedom and the sacrifices so many – including hundreds from the West Liberty community – who have fought and died in wars or have died since.

Wertzbaugher, who retired in 2014 after 23 years in service to his country, has been the featured speaker at West Liberty Memorial Day services for several years, conducted with the help of the Mansell L. Phillips American Legion Post 509, West Liberty Legion Auxiliary, Sons of the American Legion and the West Liberty High School band.

He said the price of freedom in 1945 was the fact that 405,000 military personnel gave their lives by the end of World War II. By the end of the Vietnam war, 90,000 soldiers had died for their country and the global war on terrorism cost over 7,000 more lives.

Wertzbaugher pointed out while combat casualties continue to rise, the number of deaths by suicide among veterans has “skyrocketed,” pointing out 17 to 25 veterans take their lives every day.

“That is a staggering amount – about one per hour,” he said.

He said Memorial Day is set aside to honor the men and women who have made the “ultimate sacrifice,” and encouraged those attending to “reach out to a Veteran, thank them for their service and to offer to help them if they are struggling.”

He continued his speech with a poem, “Ode to Memorial Day,” by Paul Laurence Dunbar.

He praised a proud crowd of residents, that included many veterans, for coming out, honoring those who served as well and finalized his talk by saying, “Today, God Bless the USA.”

Jeff Owen, a Sons of the American Legion member, read names of all the local service members honored with flags dedicated in their honor draped around the cemetery.

The American Legion Auxiliary alsolaid a wreath in honor of the servicemen and women in the area who gave their lives for the country.