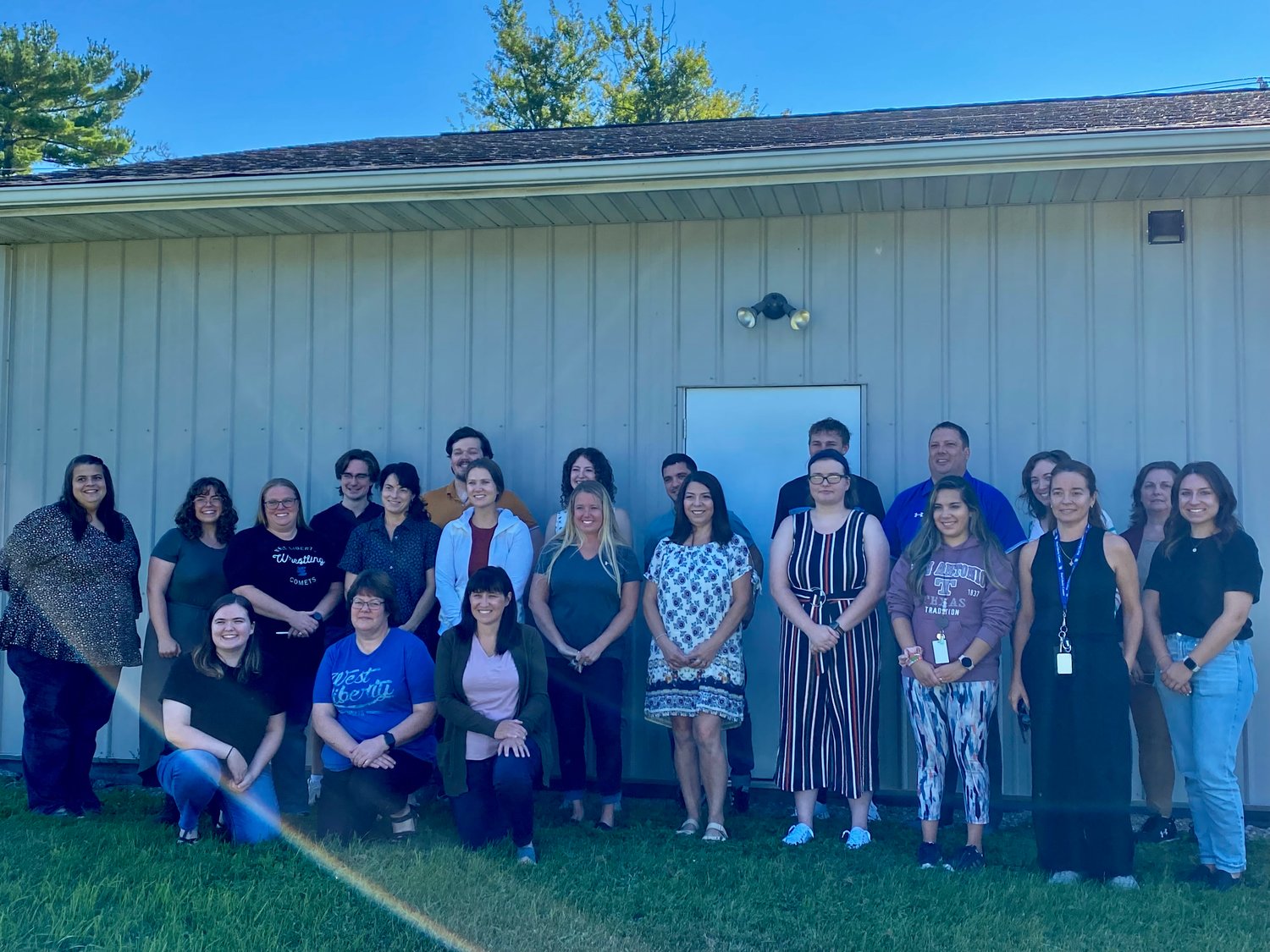 This is the new staff at the West Liberty Community School District. They started Monday, Aug. 15 for training
Photo by Kara Kruse
Posted Wednesday, August 17, 2022 10:39 am
By Xiomara Levsen, Index Editor

New staff members started Monday, Aug. 15. They had training for a couple of days to acclimate them to the district.

Tim Foley is the new English teacher at the high school. He worked at Regina for the past 16 years but wanted to work in a smaller community based district.

“West Liberty reminds me of my hometown – Marshalltown, but on a smaller scale,” he said. “I knew a few people who worked in the district as well who were always positive about their experience in West Liberty.”

He is looking forward to getting to know the families, community and students in West Liberty.

“I am looking forward to an exciting and engaging year in my English classroom,” Foley said. “I am excited to work with high school students and to help them grow as people, students, readers, writers and speakers. I think it is important to be well rounded. I have a passion for reading, writing, music and genealogy.”

Stephanie Nixt will be a para-educator at the middle school. She has worked in the district previously as a substitute para-educator and when a full-time position opened up she applied and got it.

Dawn Kruse is the assistant principal at the elementary school and director of special education for the school district. She was drawn to the position because of the close-knit community, the commitment to diversity in the school district and the professional opportunity it presented to her, she said.

Kruse is looking forward to the beginning of the school year.

“I am most looking forward to having teachers and students back in the building,” Kruse said. “Kirk (Ryan, principal of the elementary school) and I have been preparing for the new year since July and I am excited to see the halls filled with smiling faces and energy as we begin a new year.”

Kennedy Amos joins the district as an English as a Second Language (ESL) teacher at the high school.

“I had heard that West Liberty had a strong ESL program,” Amos said. “Once I knew that, I wanted to be a part of it.”

This will be Amos’ first year of teaching.

“And I am new to the area so I am very excited to build relationships with the students and get to know the community,” Amos added.

Rebecca Swanson will be in the middle school as the general music and chorus director.

“Throughout college at the University of Iowa, I continuously heard about the West Liberty Community School District and some of the unique and special programs offered to my students,” Swanson said. “By the time I was ready to start applying for jobs, some of my friends and loved ones were already working in the schools or with the various music programs and telling me how much they love the community. The school district inspired me by its hospitality, care for teachers and students and appreciation for music education.”

Swanson is excited to meet the students and to help them develop skills and interest for music making.

“I especially look forward to teaching ukulele, guitar and music production in general music,” Swanson said. “In choir, I look forward to helping students develop confidence in their singing and their musicianship skills while creating awesome music as a team.”

Megan Rex will also be at the middle school as the eighth grade math teacher.

She said the school district and community were comparable in size to her hometown making the position a perfect fit for her.

“I’ve had family and friends from in and around the area that had nothing but positive things to say about West Liberty," Rex said. “And the staff I met during the interview process immediately made me feel welcomed.”

The most exciting thing for Rex about her position is having her own classroom for the first time.

She is also looking forward to working with students and watching them grow and hopes to become an active member in the community and in the school district, she said.