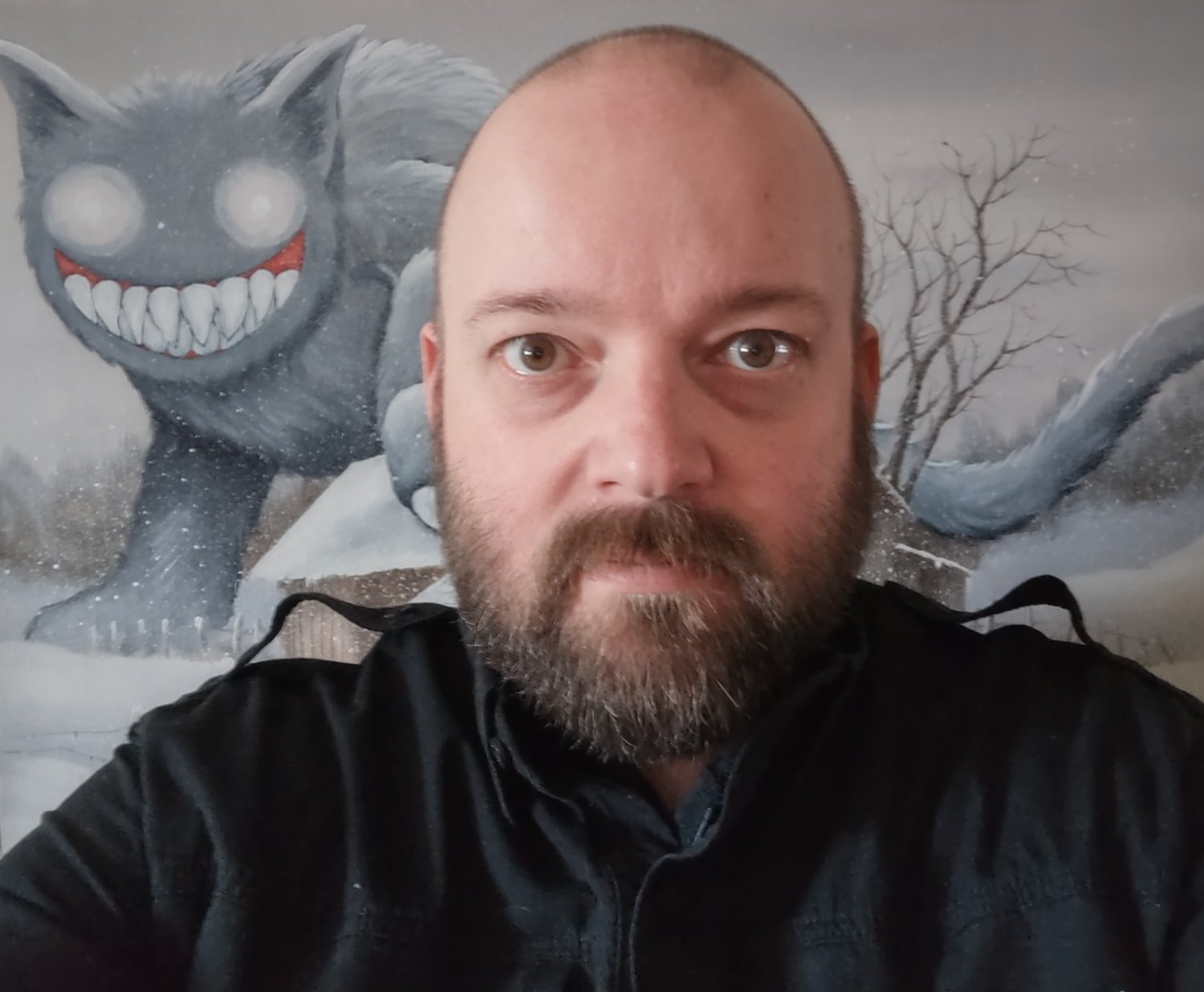 Drawing monsters since the age of six, Christopher McMahon, now 45, has never given up that love of art and now has helped invent his own unique brand of art by painting monsters into old canvases of landscape scene paintings.

He said it all started about 2012 when he came across a painting of a lake scene and decided to add a sea serpent into the large open space in the middle of the artwork. Since then, he claims to have painted over at least 100 pieces of artwork, adding monsters to every one.

McMahon will be the featured artist this month at the West Liberty Area Art Council’s Brick Street Gallery on West Third Street in downtown West Liberty. He will be showing his art this Friday from 2-7 p.m. and Saturday from 10 a.m.-6 p.m.

Known as “Thrift store paintings” McMahon’s art is painted over “thrifty” paintings he finds at auctions, thrift shops or yard sales, looking for old canvases he can paint over and says he can usually pick them up for $1 or so.

McMahon said his first “Lake Serpent” titled painting got a lot of attention through social media and started displaying more of his art, eventually drawing the attention of the band Weezer, an American rock band formed in Los Angeles.

McMahan said he got a call from the band while he was getting a haircut, noting he’s always been a “super fan” of the group and couldn’t believe they wanted his artwork for an album cover. He said he worked with Republic Records in 2014 and had to sign a lot of paperwork to release the artwork to the band, noting it was his biggest art sale to date.

Born in Iowa City and raised in West Liberty, McMahon spent the past 15 years as an art teacher at Durant School Distrcit, but said he gave up the position when the Brick Street Gallery opened and offered him a job to manage the place.

He said his parents, Susan and the late Bill McMahon, always encouraged his artwork, noting both parents were into art including his mom, who was a sculpture and painter. “It’s in my family,” he said.

He said his monster artwork has changed a lot through the years and says painting monsters into old canvas paintings isn’t anything he invented, pointing out it’s been around for years.

“I was kinda raised on ‘Far Side’ (cartoons), so I kinda like to make my art to tell a story,” he said.

The Brick Street Gallery features a new local artist each month and offers a variety of local art forms available not only to be seen but purchased at the store located next to Fred’s Feed. Regularly, the gallery is open on Wednesday, Thursday and Friday from 2-6 p.m., Saturday from 10 a.m.-4 p.m. and Sunday from 1-3 p.m. For more information, contact director Deb Weiss at 319-430-5437.