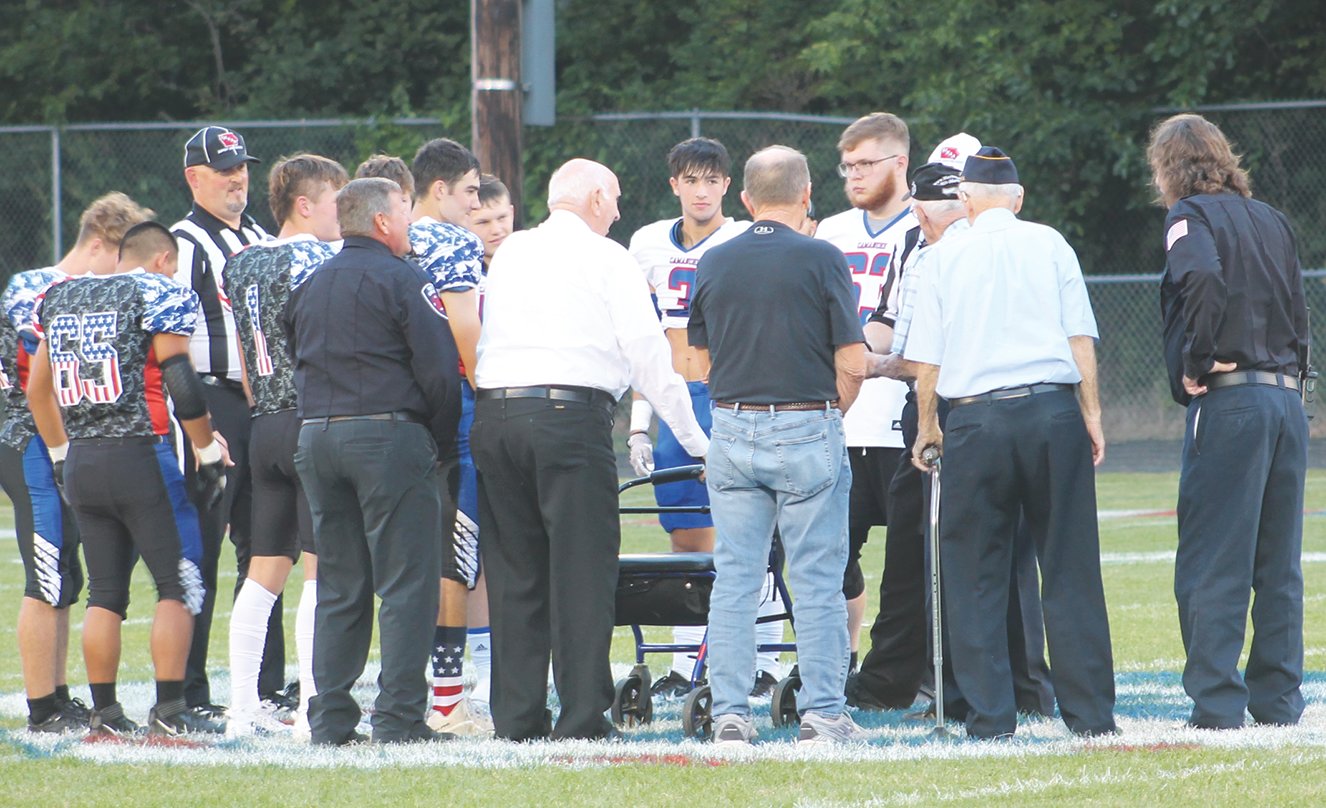 Honorary captains Walt Ken Noble, Walt and Bob Lehman stand at the 50-yard line before West Liberty's game against Camanche Friday, Sept. 16. They met the captain's from the Camanche team and captains from the West Liberty football team. Noble and the Lehmans were also accompanied by local first responders. The volleyball and football game last week honored military members and first responders for their service.
Index photo by Xiomara Levsen
Posted Wednesday, September 21, 2022 10:11 am
By Xiomara Levsen, Index Editor

The volleyball and football teams both wore special camouflage uniforms for their games, which was a departure from the normal uniforms the teams usually wear.

“They were donated to the football and volleyball teams,” Kruger said.

Kruger also added it was nice to see the community support for these events.

“And I just have to give a huge thank you to everybody who helped at this event,” Kruger added. “It was truly a community event and had community involvement and participation.”

“He spent a lot of hours out there painting the special blue and red and white as well,” Kruger said. “Some volunteers also came out to help paint some of the other areas so a lot of time was put into making this a special night and I think it really was.”

Six skydivers from the Quad City Skydiving Center skydived onto the field Friday night and delivered the game ball to the referees as well, Kruger said.

During the football game, honorary captains from West Liberty were announced. Walt and Bob Lehman and Ken Noble, all veterans, were named. When they went out to the 50-yard line of the field to shake the hands of the visiting team captains, attendees from West Liberty and Camanche broke out in cheers and applause.

Loria said this was the first year for the teams to have this event.

“This will become an annual event,” Loria said.

Loria really appreciated the participation from the visiting teams at the volleyball and football games.

“I'd like to thank Anamosa and Xavier for participating Tuesday night at volleyball,” Loria said. “For the three schools to come together and hold the large American flag for the anthem was great. I'd also like to thank Camanche – their community and football team. What happened between the first and second quarter was awesome. For both teams' players and coaches to get the opportunity to shake the hands of the fire, EMS, law enforcement and military personnel - what a special moment for everyone involved. It was an emotional night that people will not forget. I am glad the community was able to come out and support the event. What a great crowd.”

The special events at the volleyball and football games wouldn’t have happened without financial support from the community. Loria would like to thank everyone who donated.

“Money raised helped pay for the special uniforms and the sky jumpers,” he said. “Thank you to (head football) coach (Jason) Iske and (head volleyball) coach (Ruben) Galvan for allowing their teams the opportunity to participate in such a special night. And a huge thank you to Jerrod Collins who came to me with this idea. My only role in all of this was to keep telling Jerrod yes every time he came to me with another idea. What a night for West Liberty!”

Collins said the plan is to have Military and First Responder Night around Sept. 11 every year.

"The uniforms will stay with the district," Collins said. "We have close to $6,000 raised for next year already."

Collins was also excited to watch his son Drake, who is a senior and quarterback, play that evening. This would be the first win for the Comets.

"He was pretty pumped," Collins said. "He had a goodnight."

Before the football game last week, Iske said the team heard from a West Liberty High School graduate who is now an Army Ranger.

“We received Army Ranger regiment stickers from Corey Johnston, a former Ranger and class of '97 graduate from West Liberty,” Iske said. “He wrote a statement emphasizing the importance of being a team and what that means when the action gets intense. It was a good way to focus and tie in the importance of the night before we took the field as a team.”

Iske said the events last week also reminded people what it means to have freedom.

“I think there are so many things going on in everyone's lives that some of the freedoms and infrastructures that we have in our country are taken for granted,” he said. “Having events like this where people that allow these freedoms to happen are recognized and appreciated is a good way to pause life and have gratitude for the things that we have."