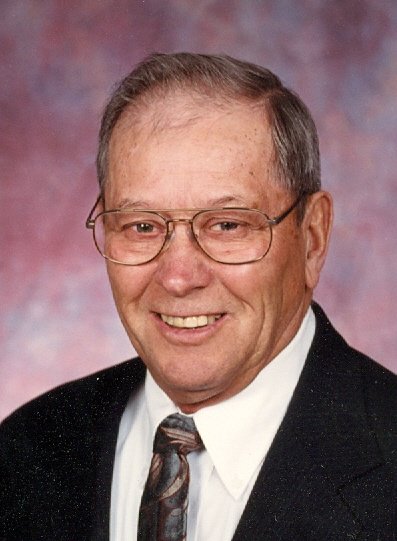 Lewis was born Sept. 22, 1928 in New Sharon, Iowa, the son of William and Doris (Phillips) Peterson. He was a graduate of Conesville High School in 1947 and Iowa State University in 1951. He was a U.S. Air Force Veteran, serving during the Korean War.

On March 18, 1951, he married his high school sweetheart, Mary Lou Littrel in Columbus Junction, Iowa. Lewie had farmed with his brother William for many years and later worked at Hester Agriservice, Nichols Agriservice and Chown Appliance.

He served on the Columbus Community School Board and was a member of Lone Tree American Legion Post #457, Masonic Lodge and Muscatine County Cattlemen’s Association.

He enjoyed woodworking, fishing, golf, traveling, a good joke and was able to participate in the Honor Flight traveling with his granddaughter, Stefanie.

He is survived by two children including a daughter, Rebecca (Thomas) Furlong of Letts and a son, Paul (Mary Lynne) Peterson of Bellevue, Iowa.

He was preceded in death by his parents, wife Mary Lou in 2014, as well as a sister and brothers- in-law who include Mary Ellen and Charles Hoag, Alice and Russell Orr, Donald and Arlene Buckman, brother William Peterson, as well as brother-in-law and sister-in- law, Laverne and Jo Anna Littrel, and sister-in-law Betty Greenlee.