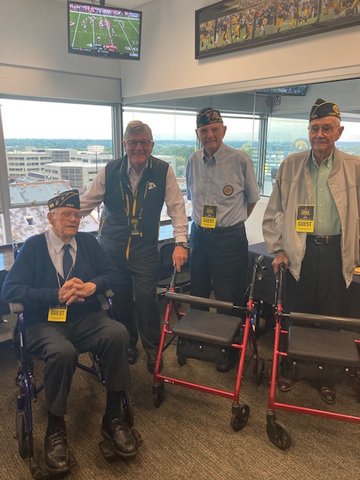 The skies didn’t open up with rain or lightning until after three brothers received recognition for their service with five minutes remaining in first quarter of the Hawkeye game Saturday, Sept. 17.

Bob, Walt and Fred Lehman had their names announced and their picture on the big screens at the game.

“We just got done with the thing on the field, got back up to our seats and it just started raining,” Bob said.

Bob, Fred and Walt Lehman served during WWII. Bob was in the Marine Corps and in the Battle of Okinawa. Walt and Fred both served in the Army. Walt battled abroad, while Fred stayed stateside to work on reports, Walt said.

Walt still doesn’t know why they get the recognition they do, especially at events like the Hawkeye game.

“That’s pretty hard to be in a situation like that,” Walt said. “I don’t know if we should have been honored like that.”

Still, Walt said hearing the cheers and applause from the crowd when their names were announced was great.

“We all had a wonderful time,” Walt added. “All three of us.”

Before the game, they tailgated. Many people stop to thank them for their service and shook their hands.

A little bit before the game was set to start, the Lehmans were escorted to their seats in the press box. There they met Hawkeye football announcers Gary Dolphin and Ed Podolak.

“We had good seats,” Bob said.

When it was time for them to get to the field to be announced, they were escorted downstairs and rode on golf carts onto the field, Bob said.

Both Bob and Walt said the day wouldn’t have been possible without the help from Durk Sterner, Jim Brooke and Brent Jehle.

“It was a great honor to help out having the “Legendary Lehman Brothers” recognized at last Saturday’s Iowa football game,” Sterner said.

Sterner, Jehle and Brooke were the escorts for the Lehman brothers that day, Walt said.

West Liberty resident and graduate Scott Jarrard obtained the press box tickets for everyone and Scott Henderson provided transportation to and from Iowa City.

The golf carts were provided by the University of Iowa Marketing department and The Learfield Company, Sterner said. The golf carts helped the Lehmans get on and off the field and around the stadium.

“To see the brothers being applauded and cheered for in Kinnick Stadium was a moment I’m sure they will not forget,” Sterner said.