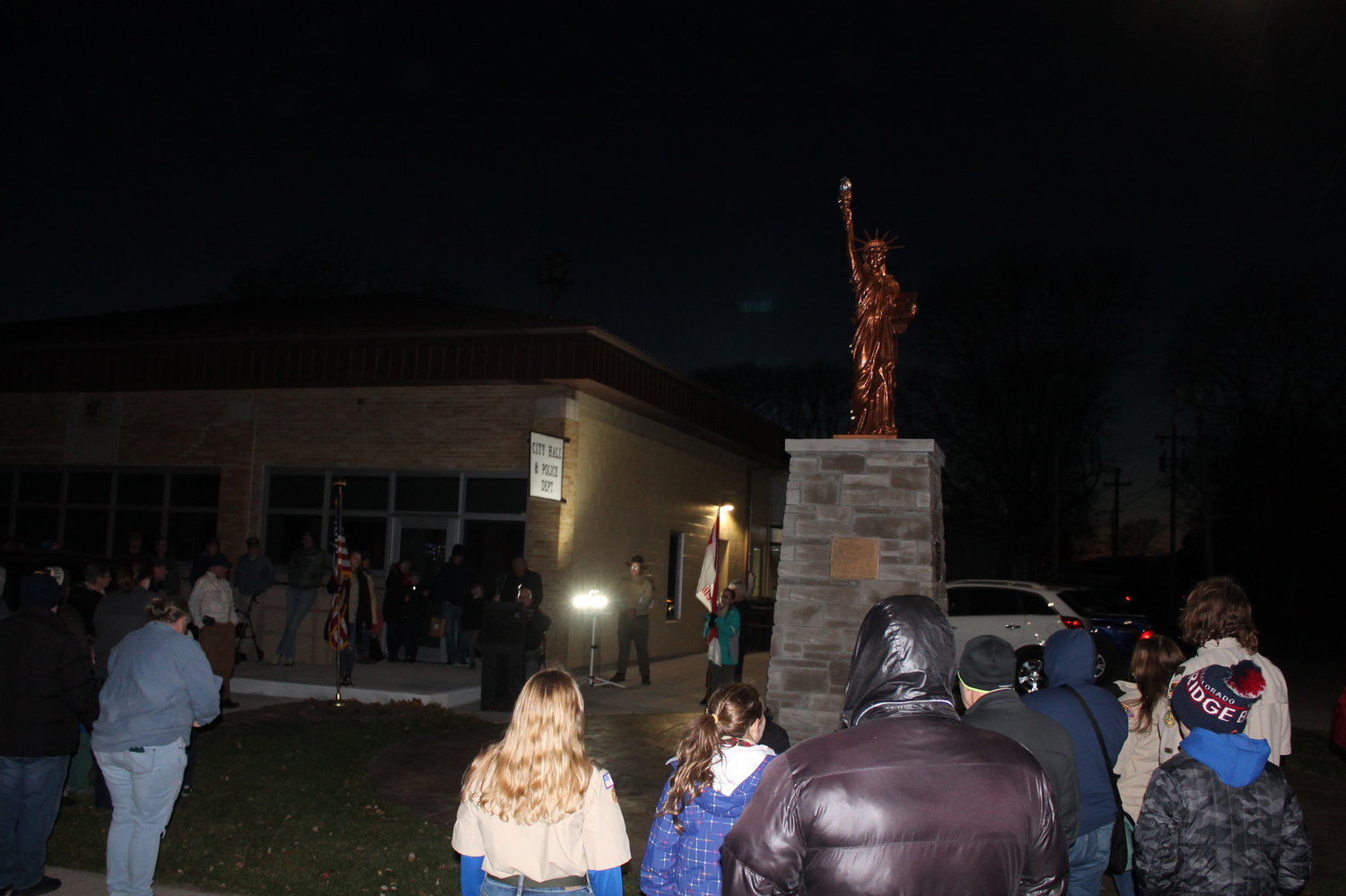 This was the scene on a chilly Sunday evening as the Lady Liberty statue was rededicated.
Index photo by Tim Evans 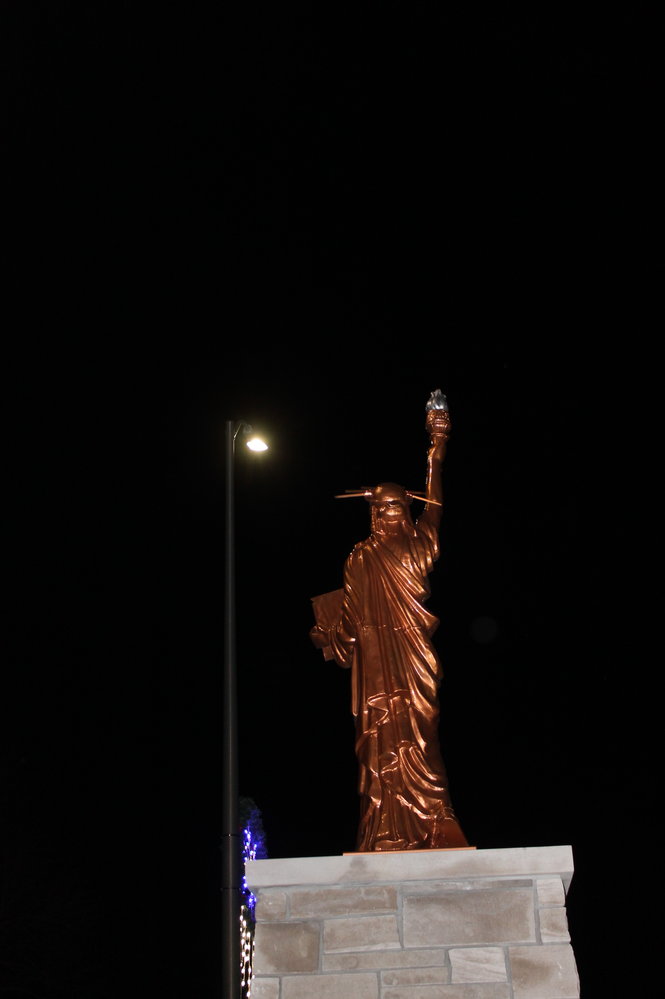 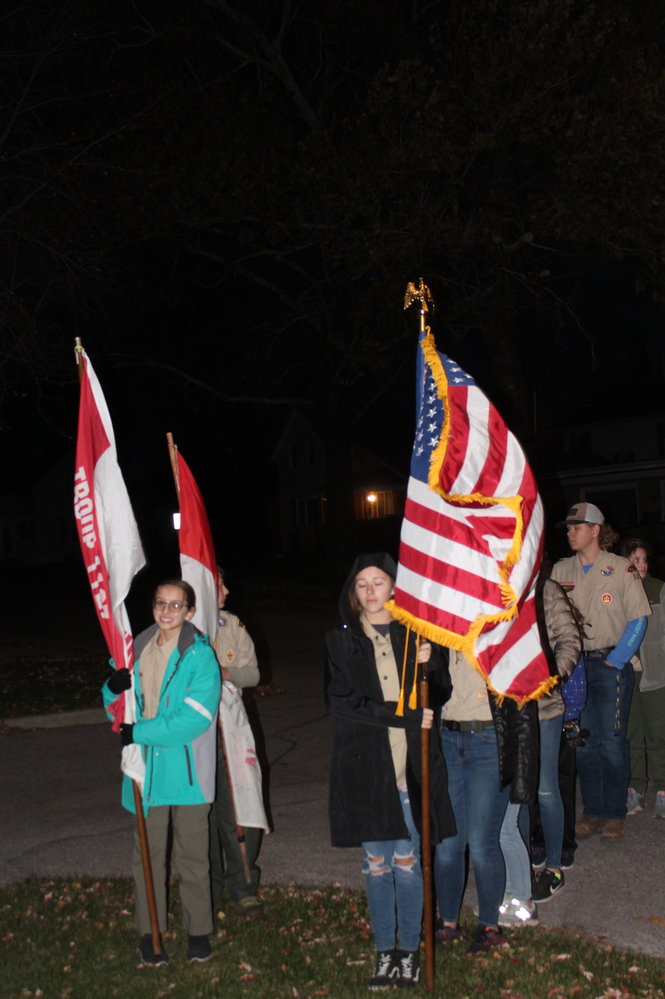 The Boy Scout color guard gets ready to post the flags for the rededication ceremony.
Index photo by Tim Evans 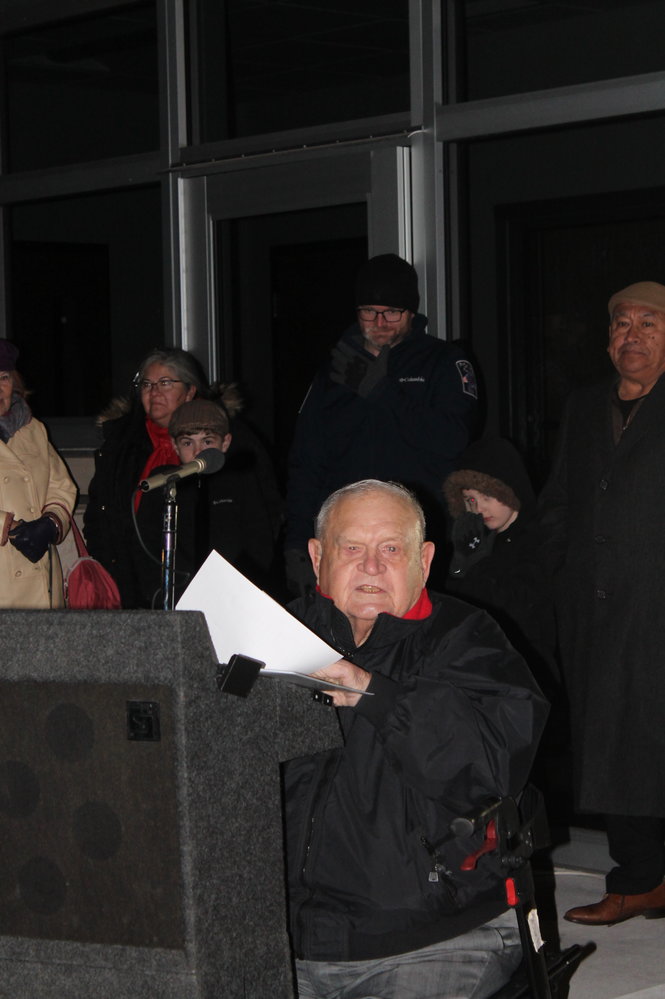 The 71-year-old Lady Liberty statue, a miniature replica of the Statue of Liberty in New York City, was rededicated on a chilly night Sunday before about 50 attendees at the northeast corner of the remodeled Waldo C. Meyers municipal building on the corner of Fourth Street and North Calhoun Street.

Charles Newcomb, a member of the West Liberty Boy Scout Troop 141 that initially raised money to buy the statue, said he was “honored” to be able to rededicate Lady Liberty after he played a role in the initial dedication of the statue seven decades earlier as a young boy.

The statue’s base had deteriorated due to harsh weather through the years and the 8.5-foot bronze replica was taken down in the summer of 2018 and was refurbished but stood in the corner of the city hall council chambers for months before it was placed back on a new platform with a base star around the monument about two years ago.

Mayor Robert Hartman explained the city was unable to rededicate the statue due to the COVID-19 pandemic, finally forcing the issue in the past few months at city council meetings in providing the idea of rededicating the statue as part of the West Liberty Chamber of Commerce Christmas Open House activities.

Newcomb, who said each one of the pack members were responsible to raise money toward the statue (without getting it from their parents), noting he found and collected hangers returning to the local dry cleaners at a penny each to raise his portion of the statue.

Newcomb said he was selected as one of the speakers at the initial ceremony because he won a Scout speaking contest, seating at the podium with some fellow Boy Scouts and about 20 community leaders including Mayor Harold O. Keele, who helped dedicate the statue initially on May 21, 1950.

The city said Newcomb stayed vigilant about the return of the statue. “He made sure that the statue was never forgotten while it was down,” the city said in a statement, noting Newcomb was a valuable asset to the community through his life, involved in the West Liberty Fire and Ambulance department for four decades.

Each of the four sides of the new base contains one of the original four plaques that commemorate the City of West Liberty, Boy Scouts of America, the West Liberty Volunteer Fire Department, the United Methodist Church, the Mansell L. Phillips Post 509 American Legion Auxiliary and Robert E. Lewis, a West Liberty native who served in the Korean War and went missing in action off the island of Japan.

Boy Scouts from Wilton and all over Muscatine County helped rededicate the statue, providing the color guard for the ceremony and leading the crowd in the Pledge of Allegiance before speeches by Hartman, Newcomb and WeLead Economic Development Director Ken Brooks, who helped arrange the Scouts for the event.

The four-time mayor said the renovation project was estimated to cost $18,000 and said financial contributions and in-kind labor donations aided the completion of the project. He said donations included the H. Filmore and Marjorie M. Melick Foundation’s donation of $5,000, a $1,000 donation by the West Liberty Heritage Foundation in honor of Arlene Otto, concrete donated by Hahn Ready Mix and All-American Concrete of West Liberty donated all the labor, including the stamped and stain color of the concrete surrounding the pedestal.

Ruess Masonry and Adam Ruess contributed the stonework labor on the pedestal and Ken Wright of Ken’s Welding in West Liberty contributed the work and labor of reviving Lady Liberty, which had damage over the years. Engineer and design work was donated by Dean Beranek of West Liberty along with Veenstra & Kimm of Rock Island, the city’s engineers.

The city paid $8,621 toward the project. City clerk Lee Geertz, who served as master of ceremonies, said the statue is exactly the same height as the original that was based in a planter. She said the star that surrounds it is exactly the width of the Statue of Liberty in New York harbor.

Mayor Hartman recognized and introduced Newcomb at the ceremony and also recognized the fundraising work of Denny Wachs on the project. “We are grateful for all that contributed fiscally and in kind for the Statue of Liberty Renovation Project,” the mayor said. “This project is part of the continued efforts by the city to renovate, revitalize and continue the vision started any years ago with the city’s Street Scape Vision plan.”

Hartman said the city would continue to find creative ways to support the community’s renovation projects, including the economic development grant to revitalize businesses in the downtown area as well as throughout the community.

In his speech, Newcomb said the initial statue was a combination of the city and the Scouts working together. He praised the current council for their work and dedication in reviving the statue and said it was an honor to be able to dedicate the statue for a second time.

He recited the Cub Scout motto: “I will do my best to do my duty to God and my country and to obey the Scout law, to help other people at all times; to keep myself physically strong, mentally awake and morally straight.”

“With that having been said, Scout Pack 141 presented this Statue of Liberty monument to the citizens of West Liberty,” Newcomb said. “We now rededicate her to this community – may she stand proudly for many years to come. God bless America.”

Brooks said about 200 of the statues were manufactured by Friedley-Voshhardt Company of Chicago between 1949 and 1952, noting roughly half of those have been “lost to the sands of time.”

He said the statue actually had a different name, “Strengthen the arm of Liberty,” noting the statue was “originally dedicated to commemorate the 40th anniversary of the Boy Scouts of America, which in 1950 was a very visible organization. Patriotic sentiment was high after the conclusion of WW2, and the Boy Scouts were there leading the way, hosting flag ceremonies, like the one we saw today, leading parades, and performing community service.”

Brooks said a lot has changed since the statue was originally cast, but noted, “Many of the important things have stayed the same. Cub Scouts are still taught to do their best, and older Scouts are taught to always be prepared, and to do a good turn daily. Scouting still continues to focus on leadership, service, and on exploring the world around us.”

He talked about the benefits of Scouting in leadership and service to communities. “Scouting is all of these things, but most of all, Scouting is community. Scouting is OUR community – right here in West Liberty, in Muscatine County, across our country – right here, right now.”

Brooks went on. “So while this statue was dedicated to commemorate the Boy Scouts, today, I think, it also commemorates you, a community that holds those 12 points of the Scout Law in reverence.” (A Scout is trustworthy, loyal, helpful, friendly, courteous, kind, obedient, cheerful, thrifty, brave, clean, and reverent.)

Brooks pointed out that liberty is “the cornerstone that our democratic republic was founded on, and YOU, my friends, are the arm of that liberty, and Scouting is here, prepared to support our young people so that they can grow to strengthen our community – to strengthen that very arm of liberty.”