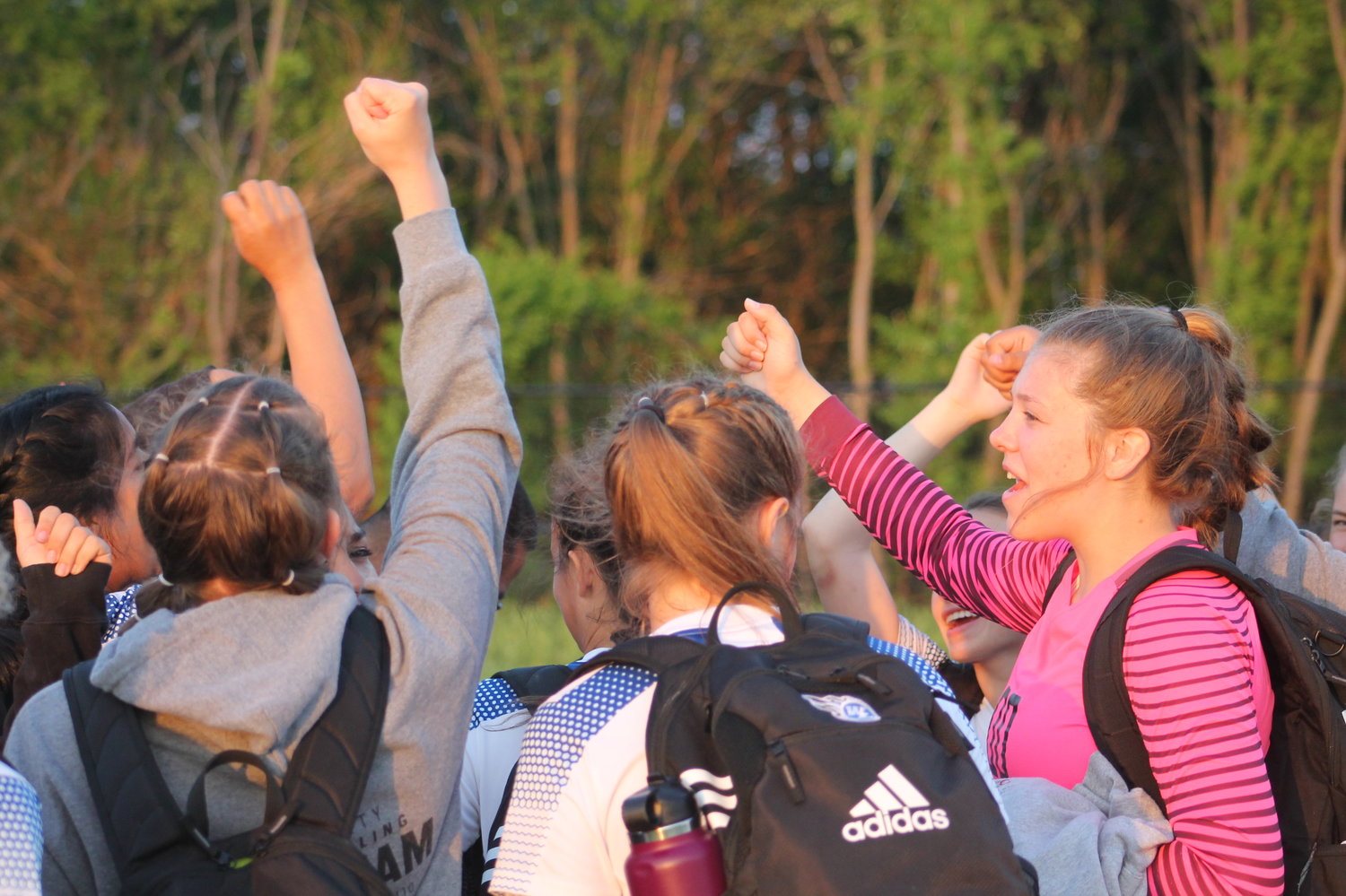 Despite the loss to Assumption, the girls led a cheer about the season they had and their hopes were for next year.
Index photo by Tim Evans 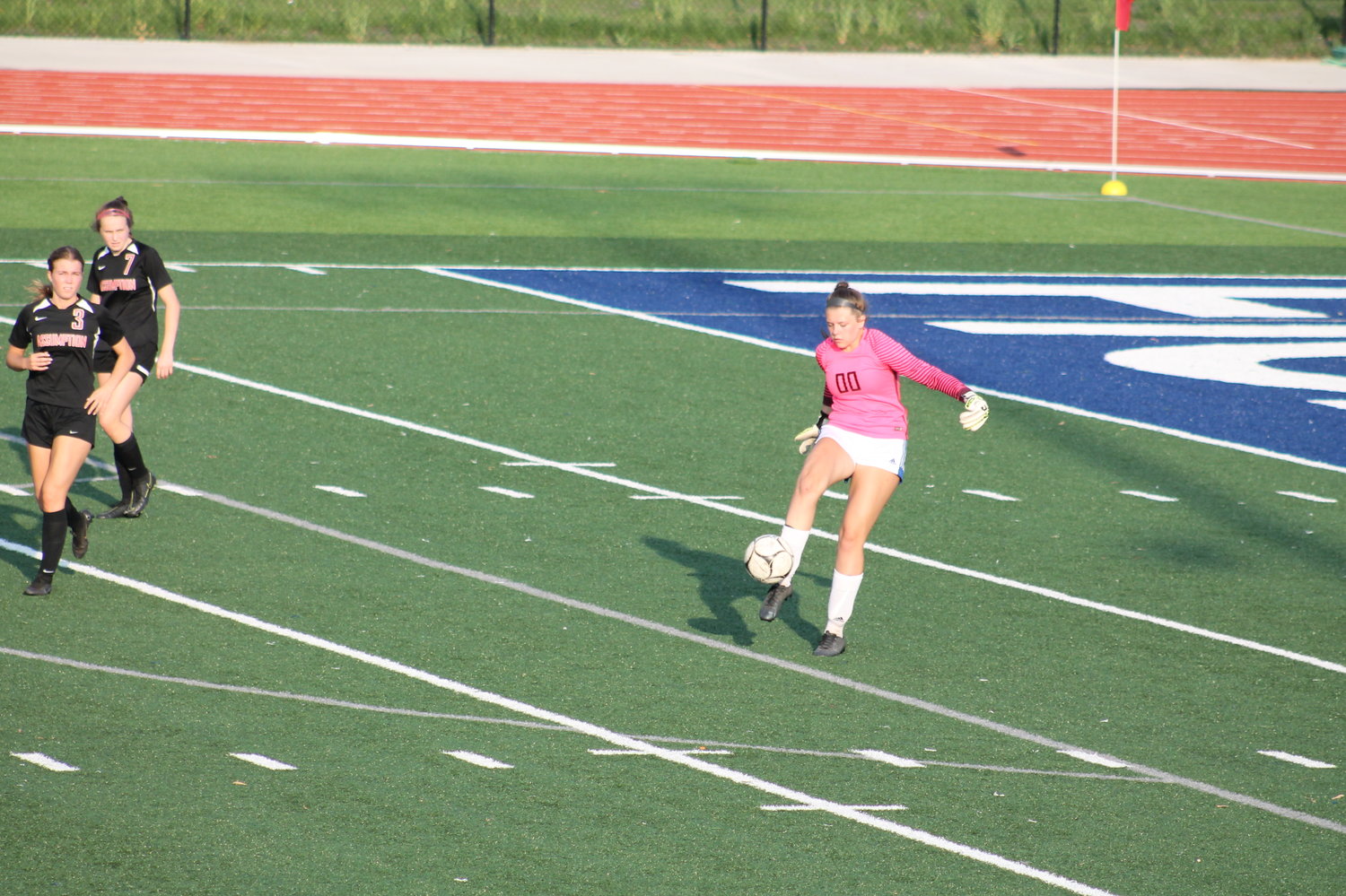 Goalie Crystal Ledezma kicks the ball away during the game.
Index photo by Tim Evans 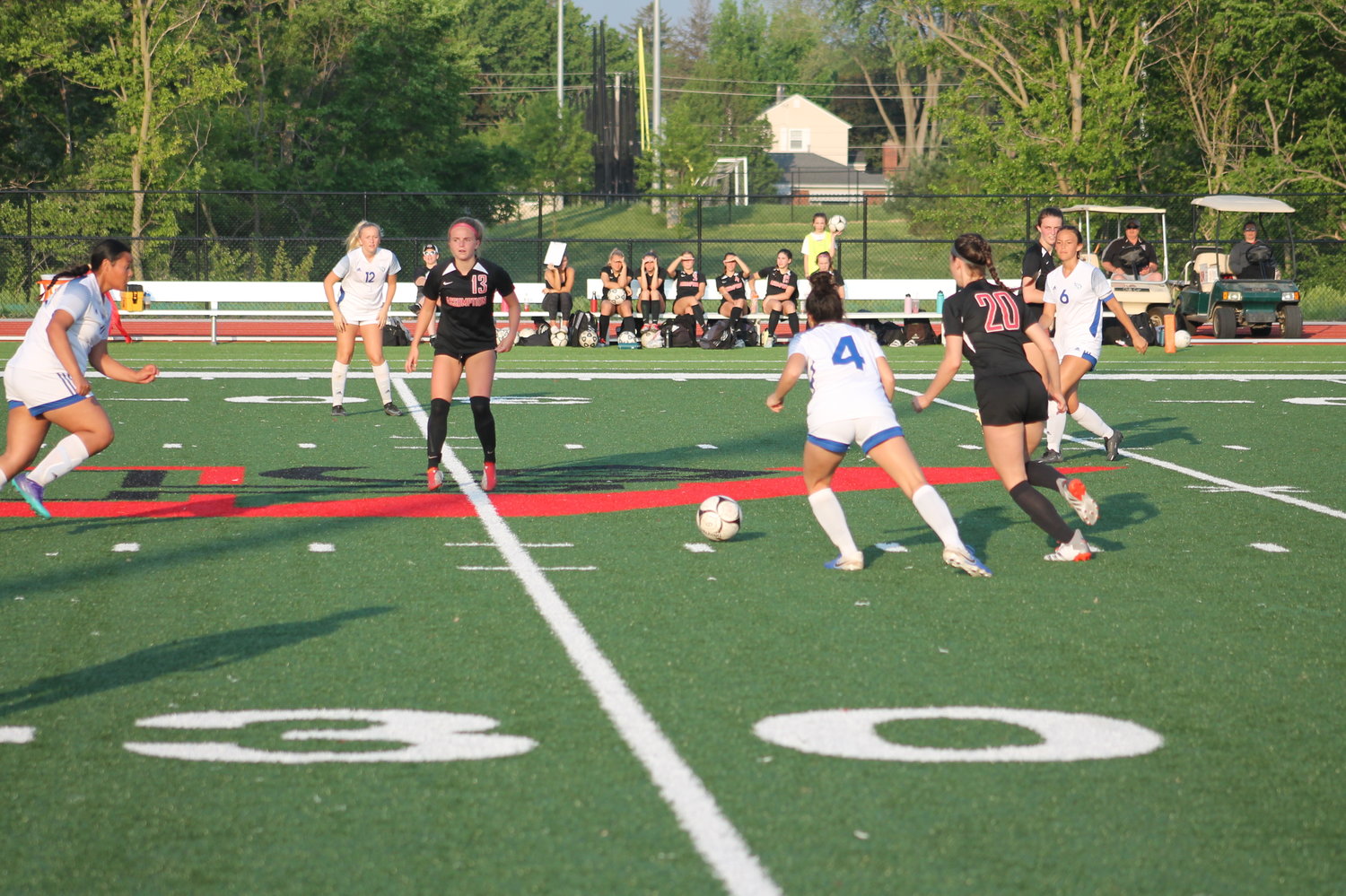 The season came to an abrupt halt Wednesday, May 18, in Davenport as the host Assumption Knights scored early and kept on scoring throughout the night in claiming a 9-0 Class 1A Region 8 win over the West Liberty High School Comet girls’ soccer team.

After winning a first-round game Monday night, May 16, over visiting Wapello, 9-0, the Comets couldn’t stir up much offense against the talented and more experienced Knights, which moved their season record to 12-4 with the win while the comets fell to 6-9 in ending their season.

Coach Manny Machado’s Comets played a lot of defense and keep-away as sophomore goalie Maelyn Wainwright did her best in keeping the Knights from scoring, walking away with 29 total saves.

Assumption struck early and often as they built a 5-0 lead, including a pair from senior Jade Jackson as well as single goals from junior Belle Langan, freshman Heather Jondie and sophomore Maddy Nigey.

Jackson finished the night with three total goals, getting her last at 39:07 in the final half to build a 7-0 lead after sophomore Nigey made a statement early in the half with Assumption’s sixth goal and her second of the game when the Comets were hoping to fight back with scores of their own. Knight senior Dawsen Dorsey scored the eighth goal with 17:07 remaining and senior Gracen Ruggles made it 9-0 with 8:59 remaining. The Comets fought off a mercy rule effort by the Knights, who just couldn’t connect for that game-ending 10th goal before time expired, despite a flurry of shot attempts at Wainwright.

Coach Machado said his team struggled in the beginning of the game as they faced a quicker opponent than anticipated, the Knights outhustling and scoring goals early to build a quick 4-0 lead. He said the Knights played at a different level, calling the Assumption team a major test for his Comets.

The coach said he was proud of his team’s effort, as they have been “going out every game to compete.”

“They gave their best of what we’ve got,” Machado said, complimenting the team’s efforts despite the disappointing loss.

He said the team came a long way this year from the start of the season and complimented players who had never played soccer previously for learning the game quickly and helping the Comets compete.

The coach said his team actually had some good defense against the Knights, although figuring out too late how to keep the Knights from scoring. He complimented the play of Sailor Hall, Kylie Struck and Monica Morales for their play and a very strong defensive effort from Finley Hall in her middle field position.

The Comets will lose just two players from the squad next year, Sailor Hall and Jessica Martinez, and the coach said he is excited about continuing to build the program.