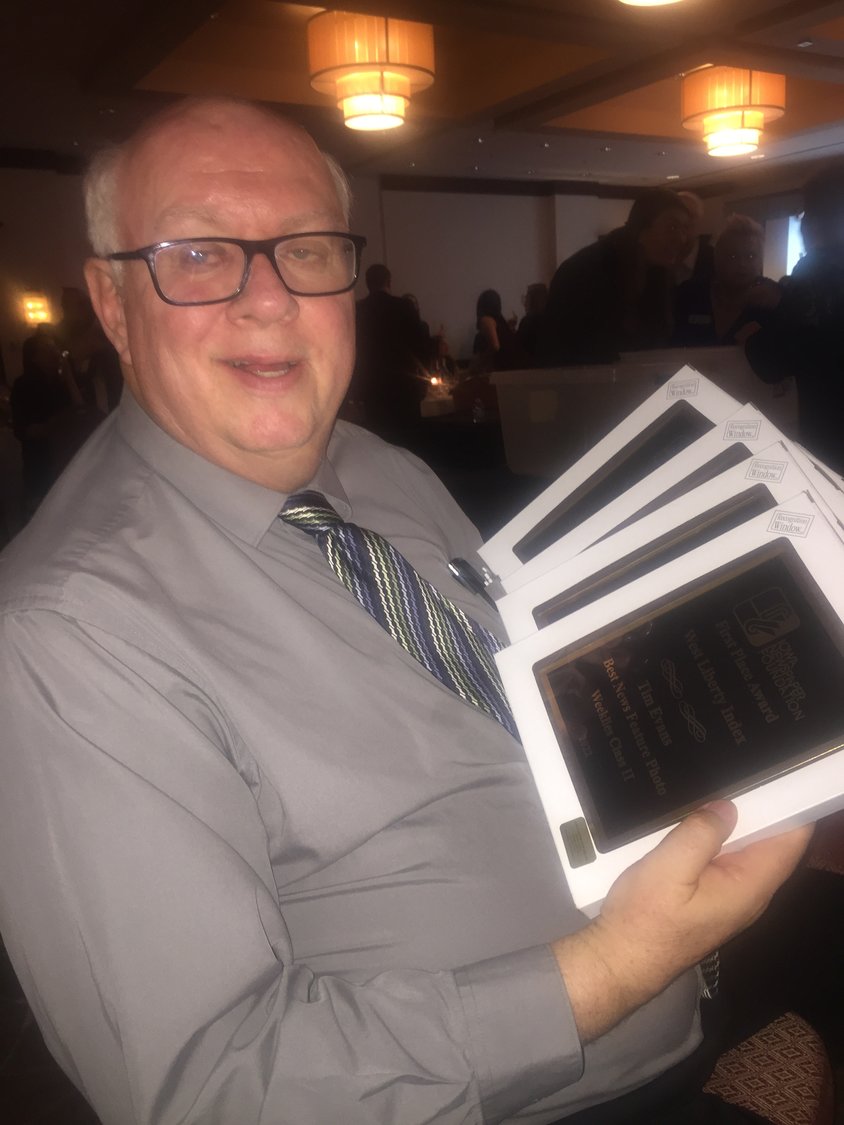 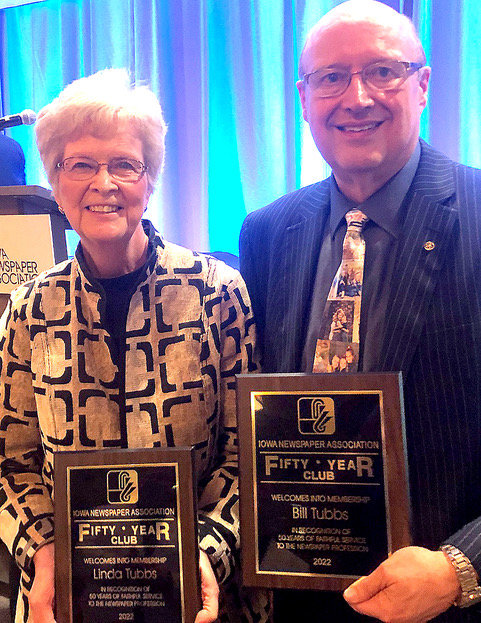 Index owners Linda and Bill Tubbs were honored at this year's Iowa Newspaper Association Awards Night, earning the "50 Year Club" for five decades of service in the newspaper business to the communities they serve. The couple also own the North Scott Press in Eldridge and The Advocate News in Wilton/Durant.
Index photo 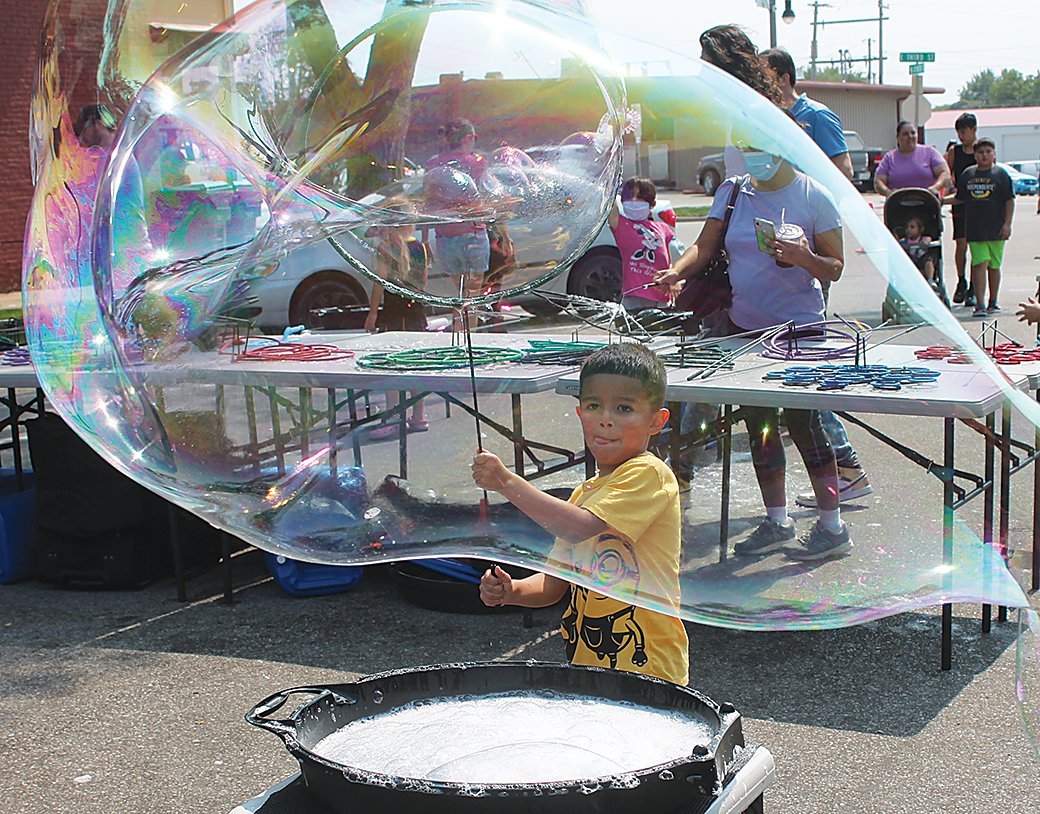 Publisher Bill Tubbs and Editor Tim Evans were both on hand to accept the honors – the first the newspaper has entered since Evans came to the weekly in 2019.

The night opened with the newspaper claiming the top prize in its 1,550 circulation and under weekly newspaper category for community leadership, presented to the newspaper for its “Latino Culture” page started in July of 2021 and written by Mark Plum initially; now being assisted by the writings of Vanessa Espinoza, both teachers in the West Liberty School District.

The idea became a reality when the newspaper applied and won a grant from the Iowa Newspaper Association to start the weekly page that talks about Latino culture, both local and worldwide. Tubbs and Evans collaborated on making the application, finding writers and making it work, with support of local businesses as well.

“A great idea and wonderful way to serve the community and express the people and traditions of the community,” the judge wrote in giving the award. “Would love to know the results and feedback about these stories.”

The newspaper followed with another first in the “Best News Story” category, an article written by Evans, titled “Truth delivered,” about a public meeting at the Muscatine County Fairgrounds hosted by members of the West Liberty Fire Department and Rural Fire District concerning a disagreement with the City of West Liberty over the renewal of a 28E Agreement that was more than a year old as well as the operations of the fire department.

Fire Chief Kirt Sickels, Rural Fire District President Dick Brand and volunteer attorney Bill Tharp all told stories that evening to about 175 who attended concerning things the city didn’t want them to convey to the press or the public.

“An important community issue that required a lot of detailed reporting,” the judge commented on Evans’ lengthy front-page article in the Sept. 30 edition.

That same addition also carried one of three columns Evans wrote to earn Iowa’s “Master Columnist” for the second time in his career.

Titled “Letter to city council – What were you thinking?” the column was the main focus of the award according to the judge who said, “Nice variety of thought-provoking columns with each broken up to make them digestible and interesting. A good mix of insight and personal reflection also add to the depth that these columns bring to readers.”

“I especially liked the ‘WHAT WERE YOU THINKING!’ one. It makes you think, ‘Yeah, WHAT WERE THEY THINKING?!’ That and his other columns surely garner a lot of attention and are ‘talkers’ in the community,” the judge added.

The “What were you thinking” piece told the story of Evans’ four-year-old granddaughter asking a restaurant waitress the question after giving her a knife and criticized the city council for its thinking in creating a squabble with the volunteers and chief of the West Liberty Fire Department.

The other two columns entered in the category that helped win the honor was a “Community Wish List” published on Jan. 7 and a Dec. 3 piece on “City council changes that may not be best for public interest.”

The final first place award came in the “Best News Feature Photo” category with a photograph from last year’s West Liberty Children’s Festival where Evans was taking pictures of kid’s creating giant bubbles in a new attraction at the festival on Spencer Street. The judge said of the front-page photo printed in the Sept. 16 edition, “Color to focus to composition to the kids tongue hanging out. A fantastic shot.” Alonzo Estrada was the young boy waving the giant bubble in the photo.

The North Scott Press, a sister newspaper to the Index, claimed 11 awards in the contest including three first place awards in a larger weekly newspaper category. The first place honors included Best Editorial Pages, directed by Bill Tubbs; Coverage of Education and Coverage of Agriculture, both written by Scott Campbell and Mark Ridolfi.

The Dubuque Telegraph Herald, owned by Woodward Publications (former owners of the Index), was named the 2022 Iowa “Newspaper of the Year.”