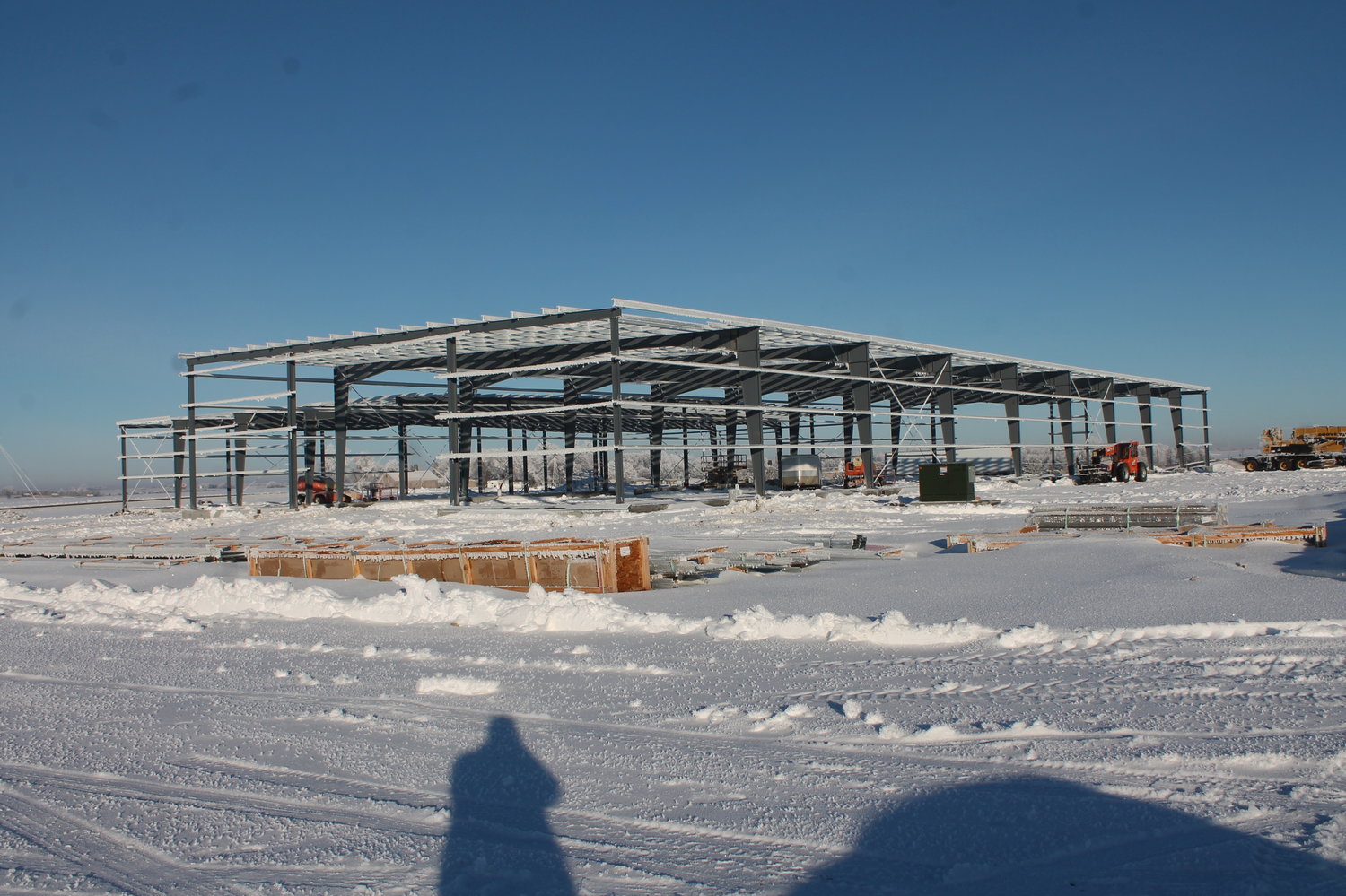 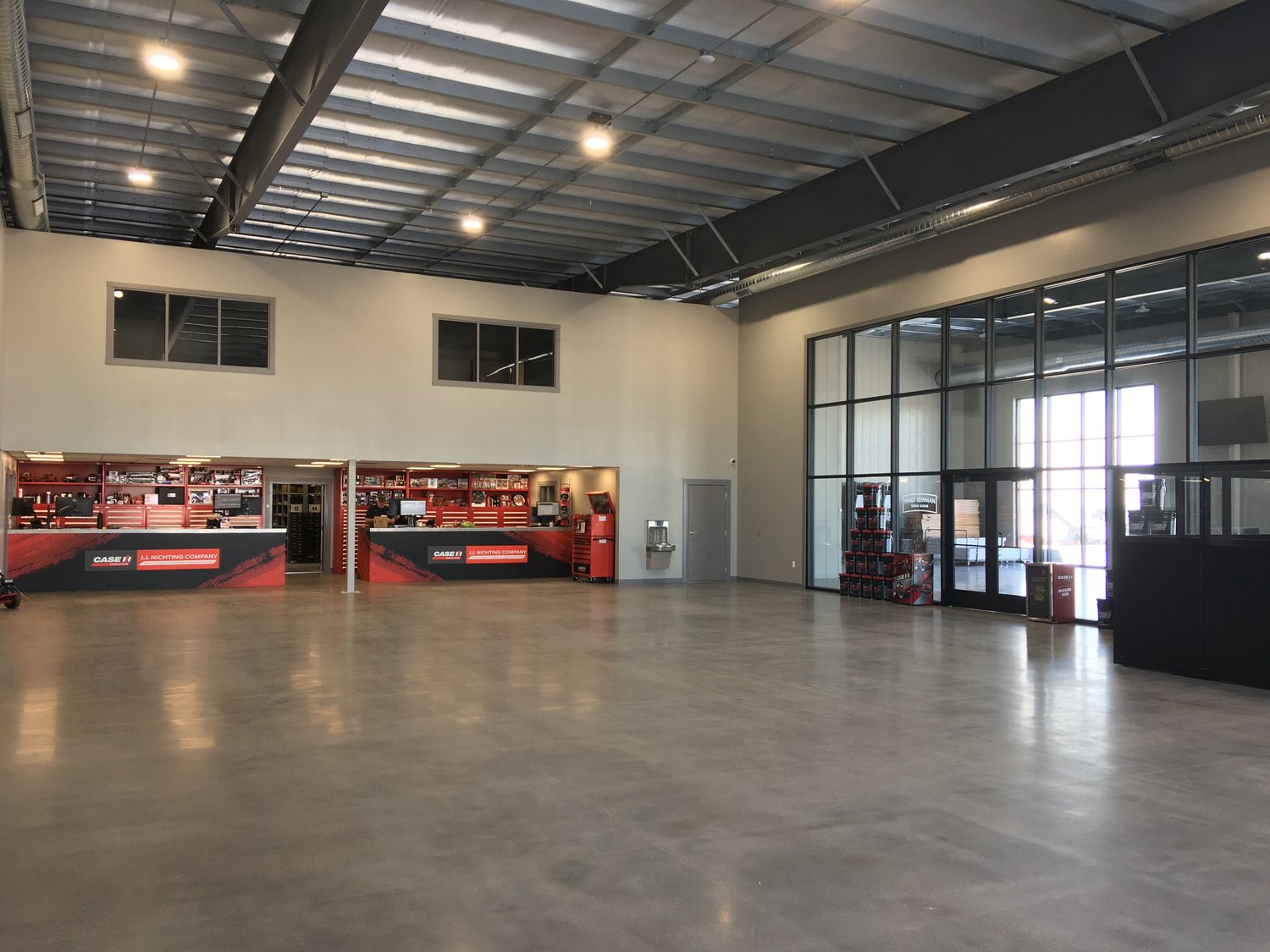 A new state-of-the-art training, parts, sales and service center, constructed by J.J. Nichting Company in combining offices for Tipton and West Liberty on 15 acres of property near Interstate 80 about five miles north of West Liberty, will host its Grand Opening next Friday, Jan. 21.

The Case implement dealership opened the new 45,000 square foot facility in September, but with the harvest in full throttle and the fall being the firm’s “busiest time of the year” according to Chief Operations Officer Jeremy Marston, the grand opening was put on a back burner.

But the company isn’t holding back on celebrating their new facility on that day, shutting down their service center from 10 a.m.-2 p.m. as all 27 employees that were once at the Tipton and West Liberty facilities gather to show off their new high-tech home that will even feature Case’s newest tractor, a brand new 340 Row Track that’ll be in the showroom that day.

“You gotta come in and check it out,” said Marston, calling it the latest in high tech tractors that will be on display in the Walt Lehman training area, that doubles as a showroom for the implement dealership.

It’s likely Iowa Secretary of Agriculture Mike Naig may also be in the building that morning. Also on hand will be former West Liberty resident Pat McCrabb, the general manager of J.J. Nichting, including it's operation in Pilot Grove. Case manufacturing representatives will also be on the grounds to welcome customers.

Marston said there were about 1,000 invitations sent out to customers of the dealership but said anyone can attend the Grand Opening that will feature snacks, refreshments and give-aways as well as tours of the building that includes a giant new geo-thermal service area and a 17,000 square foot parts department that is now three to four times bigger than anything the company offered in their previous facilities. It will also offer Case gear, tools and toys.

He said having the availability of parts is a key to the J.J. Nichting service strategy, making sure farmers aren’t down when it’s time to plant or harvest. “Having parts in stock is important,” he said.

He said the new geo-thermal heating and cooling of the building, including the 25,000 square foot service department, may be a key to attracting young new farm mechanics to the facility.

The facility will also offer bulk oil sales including engine or hydraulic oil and Marston said farmers are welcome to bring in their 55-gallon drums to save money by buying in bulk.

J.J. Nichling expanded to purchasethe 82-year-old H.D. Cline Company in October 2019, hiring Marston to run the operation and then announced plans in late 2020 that they would combine the Tipton and West Liberty operations with a new facility near I-80.

Marston emphasized the Walter Lehman training center was named for long-time customer and former land-owner (where the new dealership now resides) Walt Lehman, pointing out the entire Lehman family has been doing business with the local Case dealership for years.

“The climate right now is a pre-sale market,” he said, noting even trade-ins are sold as soon as they get on the market. “Not much hits the lot any more,” he said.

He said the new building has been a nice place to work from. “Whenever you put something on paper, you visualize it the best you can,” Marston said. “It exceeded all expectations. The giant windows and the natural light it provides is wonderful.”

One of the new high-tech systems put into the new building is geothermal heating, put together by Tom Rutkowski, the general manager for E & J Geothermal of Solon.

Rutkowski says his company does 175-250 projects annually to mostly new buildings as it utilized heat pumps and systems buried in the earth to bring electricity to the building, usually 3.5 to four times more efficient than regular heating and cooling systems.

As one of the largest geothermal installers in the state and the Midwest, E & J Geothermal says they do a lot of school projects and said the JJ Nichting project was “pretty cool,” with the office, training and parts area of the building utilizing a water to air concept when the shop portion of the building utilizes radiant heat with forced air cooling and heating in the floors.

The previous Tipton and West Liberty stores were a total of 35,000 in square feet and the company felt “land locked” in seeking a new home they could build upon for their customers.

J.J. Nichting Company, now in it’s third generation of family ownership, is known as a leading agricultural dealer with the largest parts inventory in the tri-state area of Iowa, Missouri and Illinois. Founded in the tiny community of Pilot Grove, the business was started by the Nichting family in 1920 and had over 60 employees with 700 combined years of ag experience before purchasing the Cline operation.