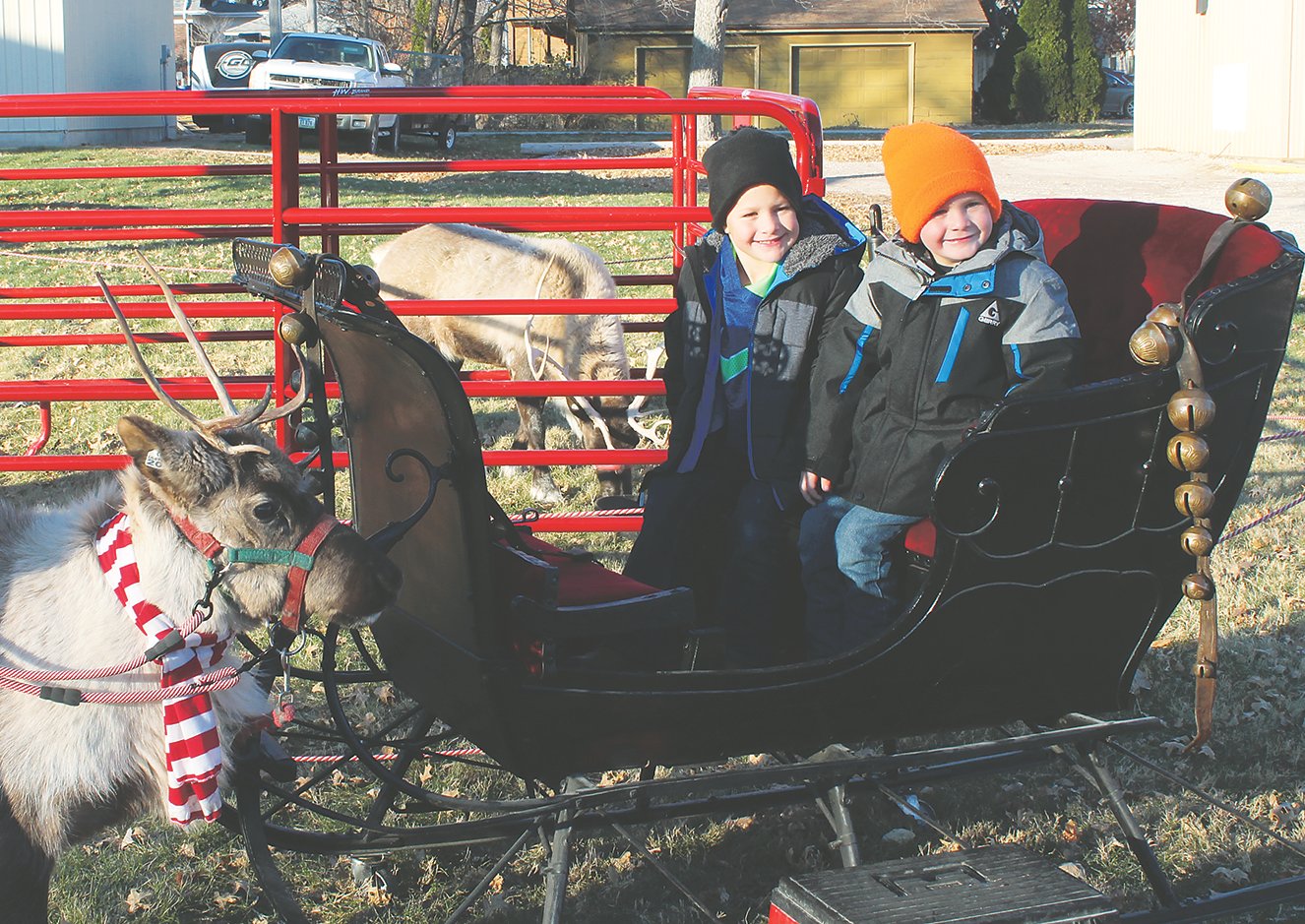 Robby Daufeldt and Brady Elder take time to get a picture on a sleigh with one of the live reindeer during West Liberty's "Holiday Open House" Sunday, Nov. 20.
Posted Wednesday, November 23, 2022 12:36 pm
By Xiomara Levsen, Index Editor

This past weekend, West Liberty got a head start for the holiday season with its “Holiday Open House.”

The event was held over a two-day span Saturday, Nov. 19 and Sunday, Nov. 20, instead of just one day like previous years.

“This year, my committee and myself wanted to try some new ideas out,” he said. “We knew there would be challenges, but I wanted to see how we could get all lines of businesses to enjoy the ‘Holiday Open House.'

On Saturday, many retail businesses in West Liberty had extended hours for people who wanted to get a head start on their Christmas shopping. The day ended with a pub-crawl which several of the restaurants and bars took part in.

“I have seen other communities do this type of event and we wanted to try it,” Brooke said.

Sunday, there were activities at several locations that families could enjoy including seeing live reindeer and cooking S’mores by a campfire near West Liberty City Hall.

Dave and Jane Bethards, of Garden Grove, have brought reindeer to the “Holiday Open House” for four years.

For two and a half hours there was a steady stream of children coming over to ask about the reindeer.

“They had all kids of questions from Christmas questions to actually having reindeer questions so you have to change your answers according to the question,” Jane said.

Kelly Morrison volunteered at the S’mores station with Sam Morel.

“This was an amazing way to do S’mores this year,” she said. “CarQuest purchased them all and the Chamber helped put them all together according to what I understand.”

The items for S’more makings were in individual sandwich bags, which Morrison said made a lot easier to be handed out. She estimated over 180 were handed out.

“This is the first year we’ve done it this way,” Morrison said. “They did it a couple of years ago on the street corners throughout town.”

She felt having all the campfires in one spot helped to keep trash from going everywhere and things more contained.

Sunday evening, West Liberty Chamber of Commerce President Kara Kruse thanked the businesses and sponsors who participated in the “Holiday Open House” before the lighting of the city’s Christmas tree. She also announced the winners from the $100 in fuel cards, a gift basket of items from Chamber business members and West Liberty Chamber bucks.

The Chamber of Commerce also held a food drive for the West Liberty Food Pantry.

United Methodist Church in West Liberty held a lasagna lunch Saturday. The church decided to donate the proceeds from the lunch to the food pantry.

“In less than two hours they raised $1,400,” Brooke added. “The holidays have begun in such an amazing way. I can’t thank West Liberty enough.”

The weekend ended with the annual tree lighting. Mayor Ethan Anderson told everyone happy holidays and thanked the Chamber of Commerce for making this a two-day event.

Anderson invited the West Liberty High School FFA Parliamentary team to help light the tree. This team placed 16th out of 6,500 teams at the National FFA convention team recently. Anderson congratulated the team on their achievement then counted down from ten for the tree lighting.