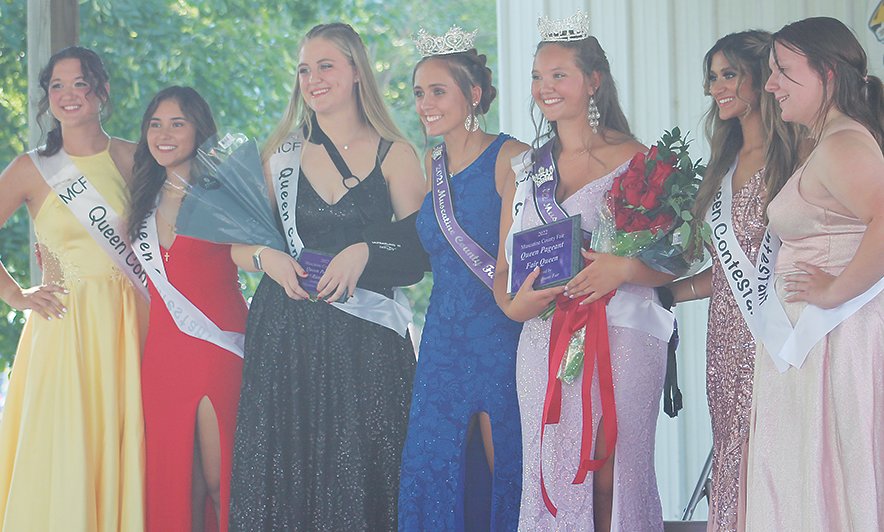 Six candidates anxiously waited for the results to be read during the 2022 Muscatine County Fair Competition Wednesday, July 20.

Morgan Hodge, of West Liberty, was announced as being selected as this year’s Fair Queen and also was selected for the Miss Congeniality Award.

Anna Marine was selected as the runner-up.

“Each of our contestants have submitted application materials including a resume and an essay why they would like to be the 2022 Muscatine County Fair Queen to our judges,” Chalupa said. “Earlier today, each of the contestants was interviewed by our panel of judges in a 15 minute individual interview.”

After that, the judges observed the girls while they discussed hot topics in the news during a group interview, Chalupa said. That evening the girls were asked two random questions so the audience could get to know them a little bit better.

The judges for the queen contest were: Brooke Stutsman, of Hills; Lynn Chapman, of DeWitt, and Mickayla Dolch, of Ankeny, who was unable to attend the contest’s final events last Wednesday.

After the judges were introduced to the crowd, the first round of questions began.

Martin was the first person to go. Her question was if she wrote a book about her life what would the title be?

“If I wrote a book about my life the title would be, 'It’s not always pretty because life does have its up and downs,' Martin said. “And that’s okay. The downs are something you can learn from and come back better and it just makes the pretty moments ten times better in the long run.”

Hodge was asked what is one thing she would like to see changed at the Muscatine County Fair. She said she would like to have the rodeo return because it was her favorite event when she was younger and in the queen contest have a younger title offered to younger girls in the county.

Palma was asked what service organization she was a part of and why it was important to her.

“One service organization I’m a part of is St. Joseph’s Catholic Church,” she said. “I’m an active member, love to participate and host many events. They make me a part of the community.”

Marine was asked what quality she had that set her apart from the other queen candidates. She said was very observant. She was home schooled, traveled abroad and had a different outlook on life than from those who were educated traditionally.

Ahluwalia was asked what the hardest lesson she has learned so far.

“The hardest lesson I’ve had so far is that you can’t take anyone or anything for granted,” she said. “The recent COVID-19 epidemic that truly affected anyone truly taught me that you can’t take anyone especially for granted. Unfortunately, a lot of lives were lost during this epidemic and it really taught me a lot that you need to keep your loved ones close and you need to show people that they are important to you and that you really care about them because anything can be taken from you in the blink of an eye.”

The second round of questions were also randomly selected by the candidates.

Some of the questions asked were what was the best piece of advice given to you by your parents; the celebrity you look up to and why; name three current fair board members and the responsibilities of Fair Queen are.

After the questions were answered, the judges deliberated for a few minutes.

Current Muscatine County Fair Board President Troy Schlapkohl spoke for a few minutes while the judges were making their decisions. He thanked everyone for attending this year’s fair, highlighted some of the grandstand events and thanked the fair crew for helping to get the grounds ready.

“Someone once told me that doing things out of your comfort zone is a way of growth and can bring you some of the best experiences in your life,” Lehman said. “And I can tell you one thing, putting on a sparkly dress and heels is for sure isn’t something I wanted to do.”

As she thought about what to talk about in her goodbye speech, Lehman said she looked back at all the opportunities she had from being the 2021 Fair Queen.

“I learned something and enjoyed every single moment,” she added.

She said she experienced things she never had done before and met people she never thought she would have.

“In the last approximately 32 million seconds I’ve met some of my biggest role models and the kindest souls and most importantly I’ve made some friendships that will last a lifetime,” Lehman said.

She said you never know when life can take a turn for the worse or be taken for granted and asked attendees to not take anything for granted that is given to them in life.

“Thank you again and I am more than blessed for the opportunity to have represented Muscatine County,” Lehman said.