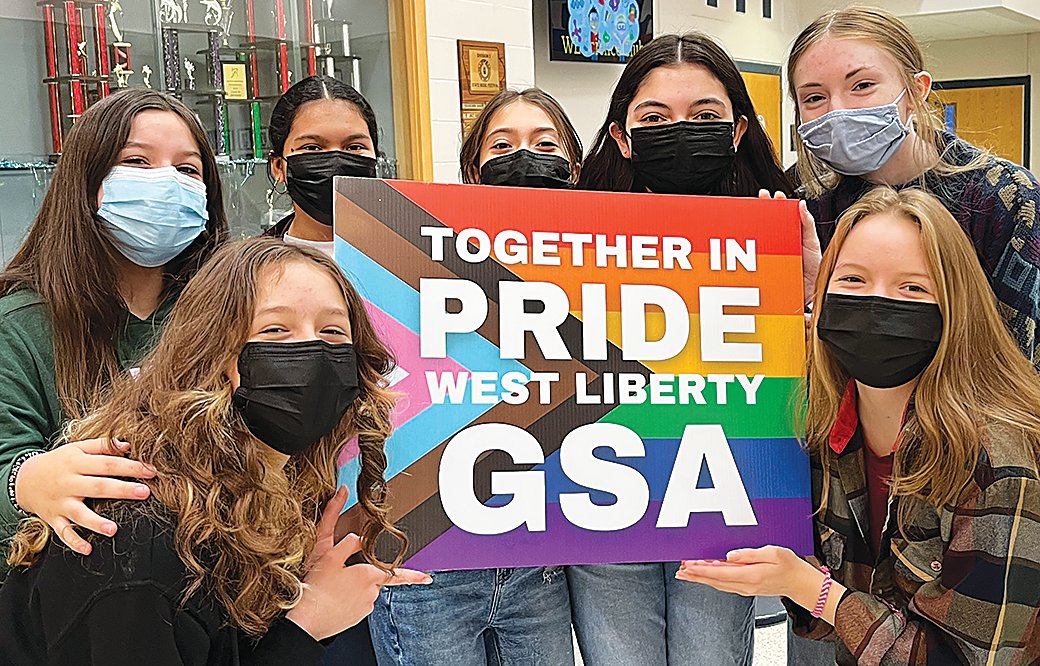 Attempting to put to rest misunderstandings about the West Liberty High School’s Gay Straight Alliance (GSA) organization and the West Liberty Middle School’s Rainbow Club, advisor Kelly Butcher addressed the West Liberty School Board of Education on Monday, Nov. 15, at their regular meeting held at the District Office of the Superintendent of Schools.

Butcher said recent discussion about the GSA at board meetings, in the Index newspaper and on social media invoked her reasoning in addressing the situation to make it clear that the GSA is an “extracurricular, voluntary, student-initiated and led group that unites members of the LGBT (lesbian, gay, bisexual and transgender) community and their allies to build community and organize around issues impacting their lives.”

She said the organization is not about sex or a club where political or social messages are promoted. “GSAs are not clubs where students are forced to choose or discuss their sexual orientation or gender identity. GSAs are not clubs designed to make students gay,” Butcher went on.

“GSAs are about valuing all people regardless of whether they're gay, straight, bisexual, transgender or nonbinary,” Butcher said. “Like any other club, GSAs offer students with a common interest a chance to connect and give them a respite from the day-to-day grind of school, work and home life. Every single student is welcome to join the GSA and would be welcomed with open arms.”

A teacher for 25 years and the librarian in both the high school and middle school for the past nine years, Butcher said the GSA group may be seen as controversial, but noted it’s illegal for schools to use that as an excuse to silence or exclude the organization. She noted there is no plan to disband the organization or remove the advisor, noting the group and its members are protected by federal and state laws, something she said she would be glad to share.

“Often times, if community members are in an uproar over the GSA, the school's responsibility is to address those concerns - not shut down a group because some people don't like it,” Butcher said. “If a GSA becomes a point of contention in a community, it only proves the need for the GSA to exist in the first place.”

She went on to explain the National Academy of Pediatrics has declared adolescent mental health to be in a “state of emergency,” noting LGBTQ (lesbian, gay, bisexual, transgender and queer) teens face even more risk than their straight peers.

“In a survey given to West Liberty parents, we learned that parents are worried about student anxiety, depression and barriers to learning,” Butcher pointed out, noting there is hope. “Students in schools with GSAs report lower mental and physical health concerns, greater overall well-being, less drug use, less truancy, and greater perceived school safety than students in schools without GSAs. Schools with a GSA report a 40 percent decrease in suicide and an overall improvement in mental health,” she said.

Butcher said some research suggests that GSAs may also benefit students who are not in the club. “In one study, members and non-members in schools with GSAs both reported less bullying, reduced truancy and less drug use,” she said. “These findings speak to the advocacy efforts of GSAs to improve the experiences of all students in their schools. Extracurricular groups have the potential to shape school climate, address inequality, and affect student performance. The GSA can reduce discrimination, promote well-being, and foster safe and affirming school environments for all.”

Butcher said the organization, which has 34 members, is a place for students to socialize and make new friends. “While we do address issues specifically related to queer teens at our meetings, we hang out and have a lot of fun too,” she said.

This school year, the organization has had a Halloween party, watched movies, attended the NAMI (National Alliance of Mental Illness) Stop the Silence presentation, learned about mental health, suicide prevention and self care, played games, started a fundraiser, designed and purchased GSA t-shirts and “eaten way too many snacks,” Butcher said.

The group was also visited by Becky Shepard of the Iowa Safe School, a group that awarded the organization the GSA of the year award in 2020.

They are also planning a health presentation by United Action for Youth, is planning a holiday party and hopes to add a morning breakfast meeting to reach out to more members and associates.

Butcher said any student in the high school is welcome to join the organization, which is run by the students and said there are 12 members in the WLMS Rainbow Club for grades 6-8, presided by a pair of eighth grade students who plan activities and content.

She said the group would not be possible without an advisor, which she said offers guidance and assistance while supporting leadership and decisions. Butcher said the advisor needs to be an ally around issues of sexual and gender minorities and said the advisor offers consistency from year to year.

“Advisors are there to help students who experience rejection, bullying or mental health issues,” Butcher told the board. “Sometimes a GSA advisor is the only supportive person they encounter in a school – but that isn’t the case in West Liberty. Our students are surrounded by numerous supportive teachers, paras and administrators.”

Butcher also talked about the Equal Access Act (EAA) of 1984, created to keep schools from discriminating against clubs based on philosophical or religious viewpoints.

The act stipulates that school employees, such as faculty advisors, may attend, but not participate, in meetings with religious content. As the GSA does not contain religious content, under the EAA, advisors should be allowed to support the GSA in the same fashion that other club advisors support their groups, Butcher pointed out.

“While the content and objectives of the GSA are not tied to specific school curriculum, they are connected to a students’ identity, mental health and well being. All of these things impact a student's ability to participate in school, and is the very foundation of all we hope to accomplish in this district.”

She pointed out it has been suggested to tone down the colorful rainbow décor in the library and how the advisor dresses. “I can honestly say that the libraries were covered in colorful posters and garlands before I became the advisor of the GSA. Anyone who knows me, knows that this is my aesthetic – I love bright, happy and inviting colors,” Butcher told the board in her presentation.

She praised counselors, teachers and paras for “stepping up” to be allies to our LGBTQ students – “whether it is buying a GSA shirt, supporting our fundraiser, hanging a GSA sign in their room, working to get a students name and pronouns right- or stopping by a GSA meeting.

“Inclusivity and acceptance doesn’t happen in a bubble. It is the hard work that the staff put in day in and day out that make our schools the safe and affirming places they are,” Butcher went on, praising as well community members who have purchased shirts and signs and donated money toward the organization.

“Thank you for reaching out and continuing to make West Liberty the accepting place that it is,” she said.

“In spite of any differences in beliefs, I know that this community has and will continue to support and accept all students regardless of their sexual orientation or gender identity,” Butcher said, welcoming the opportunity to speak with anyone who has questions regarding the GSA organization.