School board Board asked to 'Make good judgements' 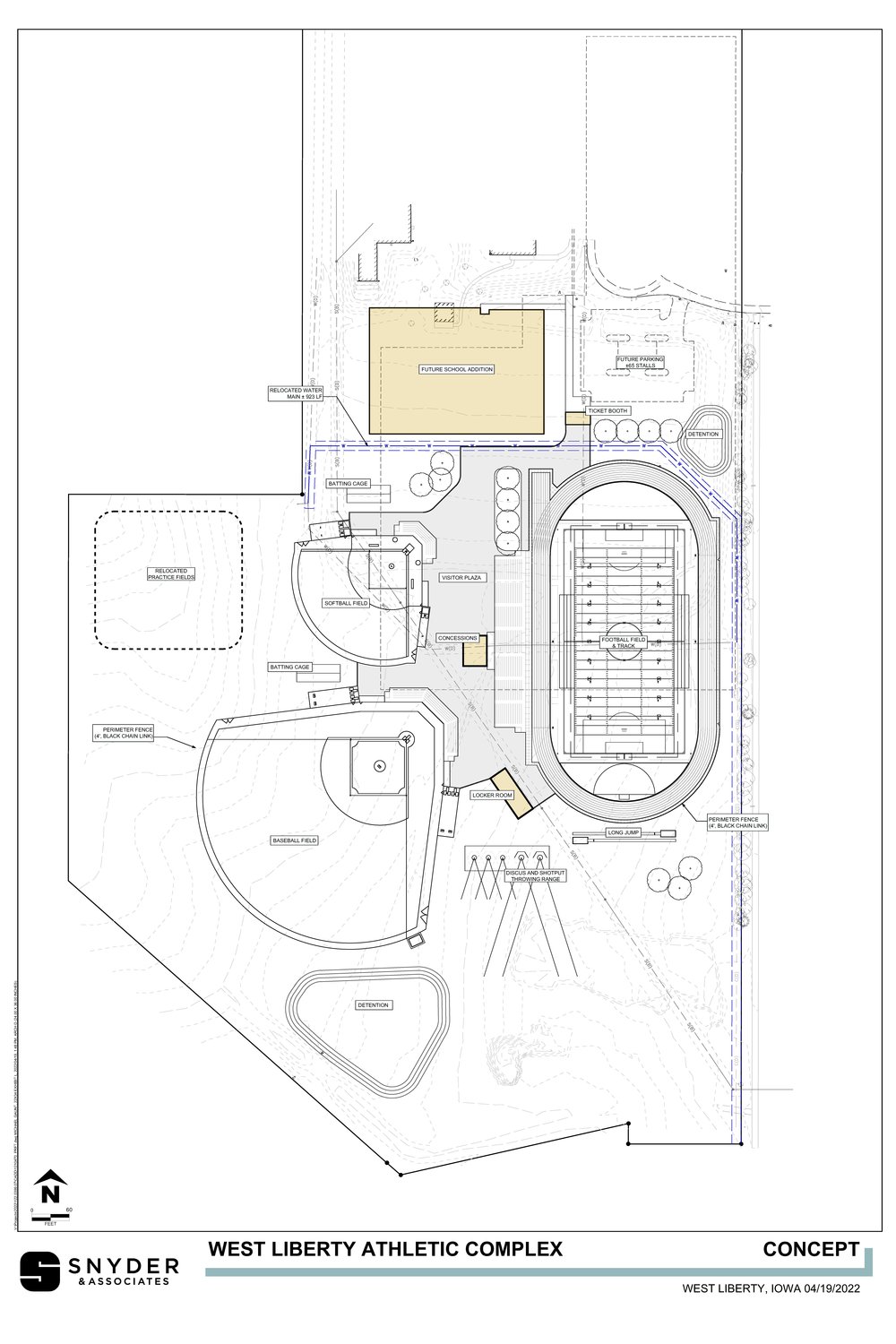 With the present West Liberty High School to the north of this proposed sports complex to be built on the now vacant grounds south of the school, this drawing unveiled at the May 3 meeting of the School Board of Education shows the tentative layout of a new football/soccer field as well as an eight-lane track with a new softball and baseball field to the west, along with a press box/concession stand, storage area and batting cages. A giant multi-use building for extra curricular activities would also be built, shown at the top of the drawing, along with additional parking. A new practice field is on the far west side of the complex.
Architectural drawing courtesy of DEH Design and WLCSD 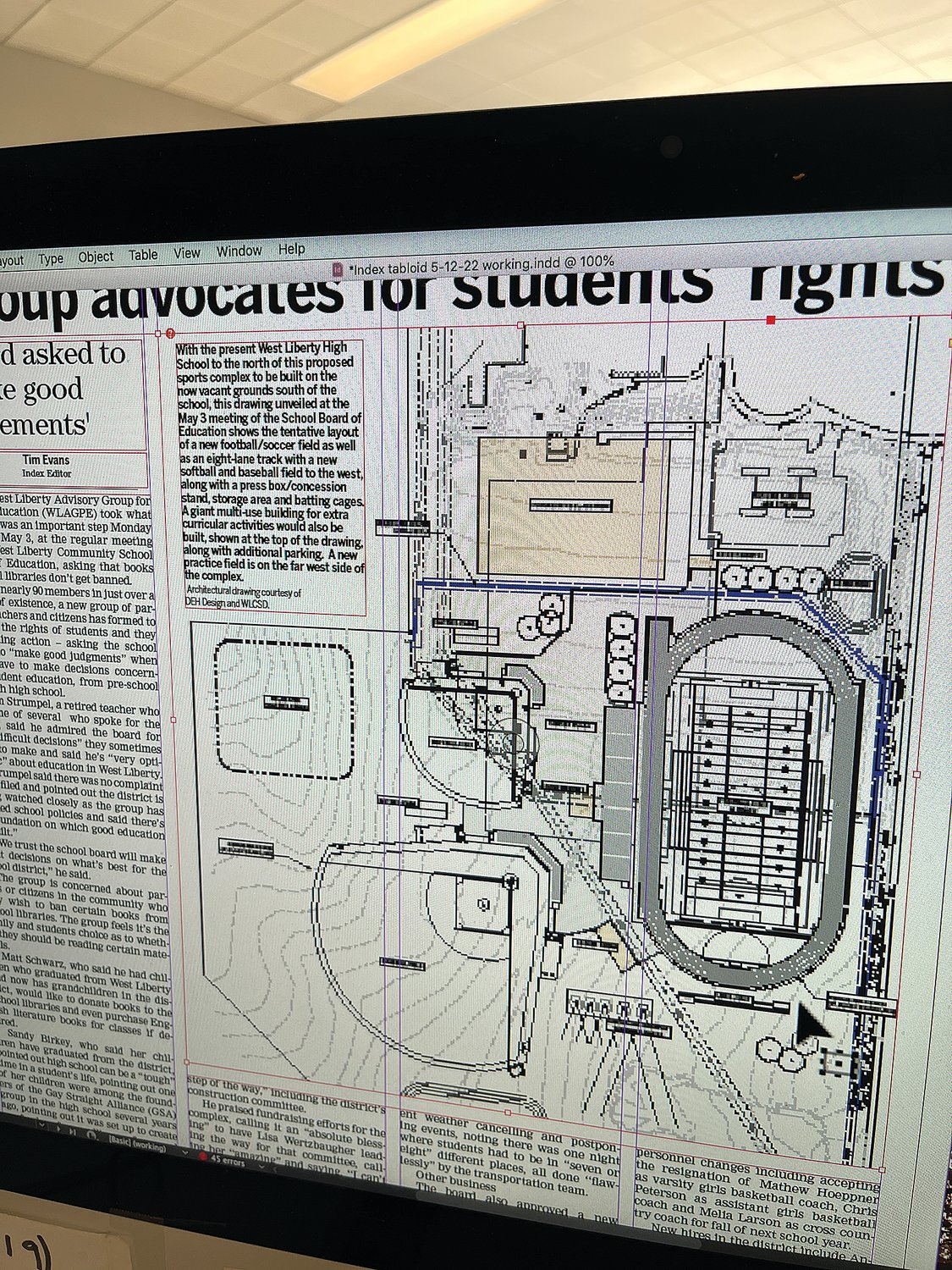 With the present West Liberty High School to the north of this proposed sports complex to be built on the now vacant grounds south of the school, this drawing unveiled at the May 3 meeting of the School Board of Education shows the tentative layout of a new football/soccer field as well as an eight-lane track with a new softball and baseball field to the west, along with a press box/concession stand, storage area and batting cages. A giant multi-use building for extra curricular activities would also be built, shown at the top of the drawing, along with additional parking. A new practice field is on the far west side of the complex.
Architectural drawing courtesy of DEH Design and WLCSD
Previous Next
Posted Wednesday, May 11, 2022 9:39 am
Tim Evans, Index Editor

The West Liberty Advisory Group for Public Education (WLAGPE) took what they feel was an important step Monday evening, May 3, at the regular meeting of the West Liberty Community School Board of Education, asking that books in school libraries don’t get banned.

With nearly 90 members in just over a month of existence, a new group of parents, teachers and citizens has formed to protect the rights of students and they are taking action – asking the school board to “make good judgments” when they have to make decisions concerning student education, from pre-school through high school.

Tom Strumpel, a retired teacher who was one of several who spoke for the group, said he admired the board for the “difficult decisions” they sometimes have to make and said he’s “very optimistic” about education in West Liberty.

Strumpel said there was no complaint to be filed and pointed out the district is being watched closely as the group has studied school policies and said there’s a “foundation on which good education is built.”

“We trust the school board will make great decisions on what’s best for the school district,” he said.

The group is concerned about parents or citizens in the community who may wish to ban certain books from school libraries. The group feels it’s the family and students choice as to whether they should be reading certain materials.

Matt Schwarz, who said he had children who graduated from West Liberty and now has grandchildren in the district, would like to donate books to the school libraries and even purchase English literature books for classes if desired.

Sandy Birkey, who said her children have graduated from the district, pointed out high school can be a “tough” time in a student’s life, pointing out one of her children were among the founders of the Gay Straight Alliance (GSA) group in the high school several years ago, pointing out it was set up to create a safe place for an alliance of gay and straight students to learn more about one another and socialize.

Birkey said books should be placed in the high school library that feature gay culture, based on GSA recommendations.

Chris Martin also talked to the board, thanking the group for their commitment to students, noting it should be up to the “families of students to decide about reading material rather than the school district” and said she feels “things are leading in that direction.”

In other business, Superintendent Shaun Kruger gave the board an update on plans for the new sports complex at West Liberty High School, noting engineers from FEH Designs in Des Moines took a tour down the Heritage Hoover bike/walking trail near the proposed sports complex grounds south of West Liberty High School to get a better idea of the layout of the land and how they plan to attack water drainage, install sewer lines and other pre-construction tasks.

Although he showed an architect rendering of what is close to the final layout of the three fields that include baseball, softball and football/soccer, he said there would continue to be minor changes, but “everyone is working together to make sure it’s done right every step of the way,” including the district’s construction committee.

He praised fundraising efforts for the complex, calling it an “absolute blessing” to have Lisa Wertzbaugher leading the way for that committee, calling her “amazing” and saying, “I can’t say enough good things about her.” He praised area families and businesses for stepping forward early in the fundraising campaign to make substantial donations toward the multi-million dollar complex.

Kruger also reported there is a lot happening with the end of the school year and things are shaping up nicely for the high school graduation on May 22.

“I just want to put a huge thanks to teachers for everything they do,” he said.

He also complimented the school for their “large commitment” noting they continue to focus on what is best for students in the district and put in a lot more hours than school board meetings in studying policies, visiting schools and taking a role in activities.

“You are here for the right reasons,” Kruger went on. “We’re definitely a better district because of the work you do.”

He also gave a shout out to Roger Morrison in the school’s transportation department for adjusting to new schedules this spring because of inclement weather cancelling and postponing events, noting there was one night where students had to be in “seven or eight” different places, all done “flawlessly” by the transportation team.

The board also approved a new Building Level Communication Leader for each school for the next school year. That person would work with District Communications Director Kara Kruse and IT Director Brian Lance to promote positive happenings in each school including student and teacher honors and accomplishments, spotlighting students and teachers on a monthly basis while positively acknowledging various groups and departments within school buildings.

The leader would also share conference information, pictures, special events like parent nights and field trips as well as student engagement in academic and activities. Most of the information would be shared on the district’s Facebook social media page.

The group would share ideas to improve communication through monthly meetings. A stipend would be paid to each leader.

The board approved a fundraiser for the West Liberty High School volleyball team, about 30 athletes hosting a youth volleyball camp to be held June 27-29 at the high school.

Timothy Foley was also hired as the high school English teacher as well as the student council sponsor, Ana Blanes was accepted as an elementary dual language teacher, Brittany Boffeli as an assistant junior high girls track coach, and Dawn Kruse as the assistant principal for pre-school through fourth grade.

Teacher leadership positions were also appointed for the next school year to include Melia Larson as a high school instructional coach, as well as Ashley Smith, Elizabeth Levai-Baird, Zach Morris and Melanie Clark, all given positions as high school model teachers.

The board set their next meeting for Monday, May 16, to begin at 6 p.m. at the district administration office at 1103 N. Elm Street in West Liberty.

The agenda is to include a report on the TAG (Talented and Gifted) as well as the STEM (Science, Technology, Engineering and Math) programs in the district. The board will also establish meal prices, preschool tuition and registration charges for the next school year and will hear a report again from Superintendent Kruger.