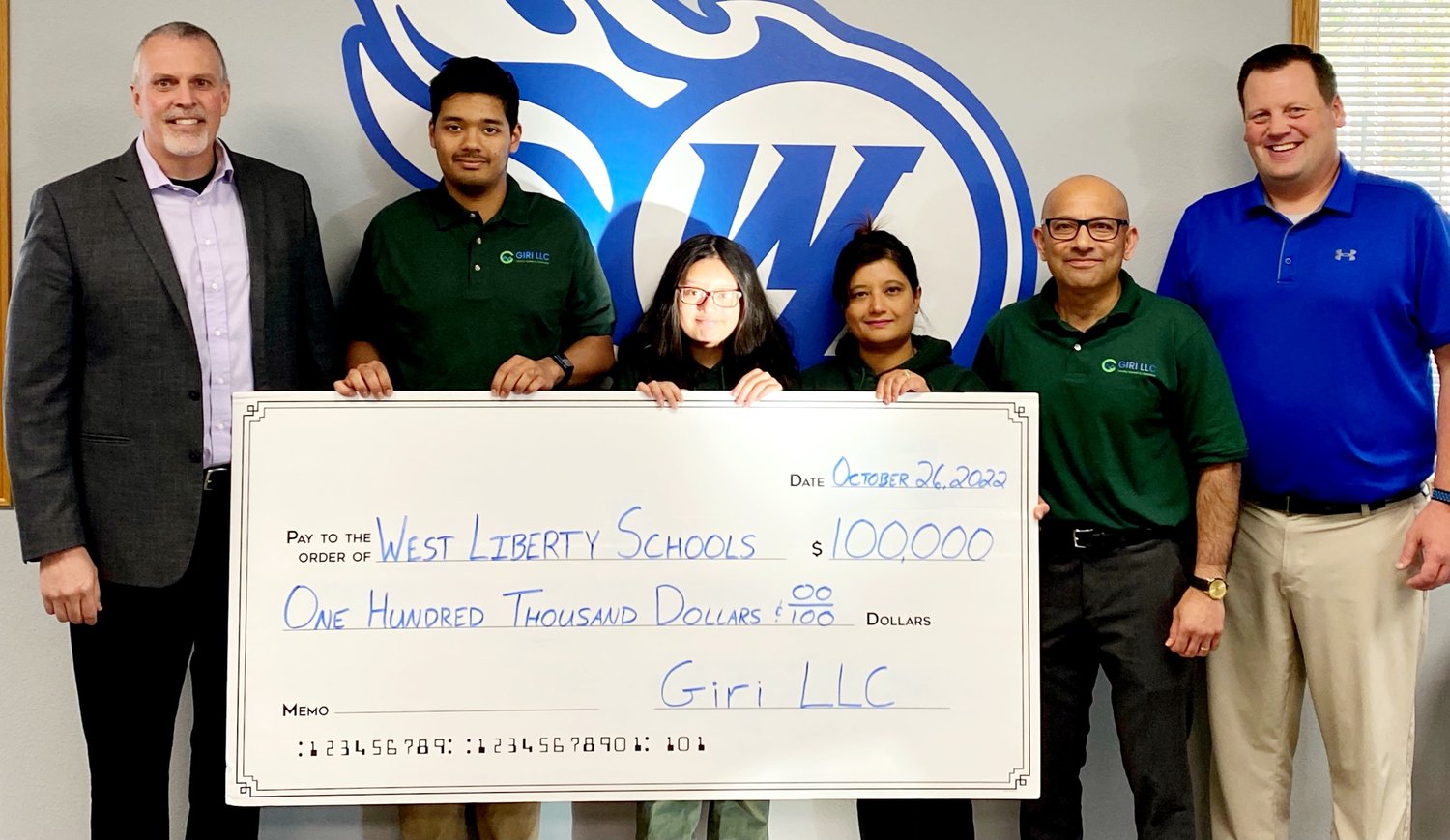 Tuesday, Oct. 4, the West Liberty Community School District hosted a groundbreaking at the site of the new athletic complex and announced three major gifts to the complex including $100,000 from Giri LLC, owned by Deepak Giri and his wife Amrita.

Deepak and Amrita have two children, a son, Adeep, in college at the University of Iowa, and a daughter, Aditi, who is in eighth grade.

Superintendent Shaun Kruger said the gift from the Giri’s is a huge boost to the project and part of a long list of support they provide.

“This is a huge gift from one family,” said Kruger. “The Giri’s provide year-round support to several of our athletic teams and programs. They are very big supporters of the Athletic Boosters. Organizations know they can count on Deepak, and he always says ‘yes’ when asked for financial assistance or volunteer hours. I would like to thank them on behalf of the entire school district.”

Originally from Nepal, the Giri’s first moved to Nebraska and lived in the greater Omaha area while Deepak completed his master’s degree. After a short time in Iowa City as well as Des Moines, the Giri’s purchased the BP Gas Station in 2004 and made the permanent move to West Liberty in 2005.

“We liked the multi-cultural aspect of West Liberty,” said Deepak. “We just love the community here. Everybody knows everybody – a lot of people can even recognize you by voice alone.”

The Giri’s expanded the gas station in 2013 by adding a liquor store and a Papa John’s pizza. The new station is much larger than the original location some residents may remember and has vastly improved the aesthetic of West Liberty’s main thoroughfare.

The family also owns several rental properties in West Liberty and are active in non-profit organizations including the Rotary Club since 2005 additionally they belong to First Church United.

Among Deepak’s accolades is time served as treasurer for the Community Center board, when asked about their involvement they said they believe it’s important to give back to the community.

“Our motto is to help others,” said Deepak. “Part of doing business is to help build the community. We all want to grow the community and this project was easy to say ‘yes’ to.”

The Giri’s believe giving to the school district is a smart investment. They feel the athletic complex will attract new families and businesses to West Liberty and ultimately help with the community beautification effort.

“People ask ‘Why come to West Liberty?’ Our academics are great, and now the athletic facilities will be great as well,” said Deepak. “It’s easy to sell the school to families looking at West Liberty, but this will make our district even more attractive. Every family adds federal funding for the school and that adds to business success. We all want to grow this community.”

The phase I groundwork began in September and Activities Director, Adam Loria, said that everything is on track. The school put all the above ground facilities and buildings out to bid in early November and expects to select a firm for that work in early December. Work on the above ground facilities will start in early spring. The Giri’s are sponsoring the new football and soccer stadium.

“This is a huge gift and a major boost to the project,” said Loria. “Everything about this project is going to be amazing, but the new football and soccer stadium are what will set us apart. The state of Iowa has about 335 school districts, and less than 20 percent of them have a turf football field. When you put in a stadium like this you become part of an elite group of athletic programs. Thank you to the Giri’s for helping get this done.”

The new stadium and turf field will be a boost to the football program, but soccer will also see a big benefit.

“Right now, we do not have a regulation size soccer field to host state qualifying events,” said Loria. “Our field is too small, and we lose out on families and revenue coming to town because we don’t have an official set up. Even just looking at the initial groundwork it’s easy to see how massive the new complex will be and the significant upgrade it is over our current facilities.”

Kruger said interest in the district has definitely picked up since the announcement of the new complex.

“We haven’t even put in a field yet, but the renderings are out and there is a lot of press about the project,” said Kruger. “Families, coaches, and athletes are noticing, and we are getting inquiries.

The Giri’s said it’s the kids that motivate them. They love to help and really appreciate it when a kid stops in to say ‘thank you’ or they get a thank you note.

“We feel very appreciated by the community,” said Deepak. “The people of West Liberty are very generous and we are happy to be a part of it.”

His daughter, Aditi, said she has heard many people outside of West Liberty talking about the new construction in the district.

“It’s neat to see how many people have donated and listen to other people outside of the community talk about this,” said Aditi. “It’s great to see something big coming to a small town, especially West Liberty.”