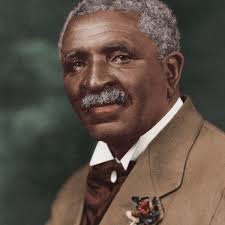 George Washington Carver was born into slavery in Missouri in the early 1860s. Having been separated from his family, the farm owner and his wife taught him to read and write.

He left the farm at age 11 to attend an all-Black school. He moved about to pursue a better education and survived by performing domestic skills he learned from foster mothers. In 1880, he received a high school diploma in Minneapolis, Kansas while working as a farm hand.

Carver was refused admittance to several colleges in the South due to race. As he moved about taking various jobs, he found himself in Winterset, Iowa working at a hotel. It was here that a couple whom he befriended encouraged him to apply to enter Simpson College at Indianola. He was accepted and began studying art and piano.

His art professor noticed his keen interest in plants and flowers and urged him to study botany at Iowa Agricultural College in Ames. George was the first black student at what is now Iowa State University.

He earned a Bachelor’s Degree in agricultural science in 1894 and became the college’s first black professor while studying for his Master of Science degree which he received in 1896. His scientific work was being noticed and he immediately received some enticing offers from several colleges.

In West Liberty, the Muscatine County Farmers’ Institute held their annual meeting at Liberty Hall (upper Tharp Building) on Jan. 15-16, 1896. Among the professors invited to speak were George Washington Carver and “Tama Jim” Wilson from the Iowa Agricultural College. Carver spoke about plant and grain breeding while Professor Wilson spoke on animal care.

In conjunction with this meeting, the ladies held their meeting at City Hall (second story of 307 N. Calhoun). Professor Carver gave three talks on the cultivation of flowers. A lengthy report of his advice is given in the West Liberty Index, Jan. 23, 1896.

During the series of meetings for the ladies, a new organization of 33 charter members was formed. Its purpose was to “aid in the pursuit of knowledge of floriculture and horticulture and the advancement of these sciences”. Their aim was to promote civic improvement and beauty in their town and homes.

Officers were elected and the group’s minutes reveal a constitution was adopted at a later January meeting. They named their group the West Liberty Floricultural and Horticultural Society. Quickly a nickname of the “F and H” Society was used and, in later years, they were called the Floriculture Society.

When Professor Carver gave his lectures in January, he promised the Society his collection of chrysanthemums. The March 12, 1896 Index reported that he wrote “the ‘Mums’ will be sent just as soon as they are in a fit condition for shipment, which will probably be in May.” Just a bit later, Carver accepted the offer from Tuskegee Institute in Alabama to head its Agriculture Department.

Correspondence between Carver and the Society continued as found in two letters that were published in the Index. In the Aug. 19, 1897 issue, Carver described his surroundings and the flowers that were blooming in Tuskegee.

The letter published on April 16, 1903 is in response to word from the Society telling him of their ongoing projects. Carver stated, “I close by thanking you for your remembrance which encourages me to press on. I sent a copy of your letter to the Hon. Mr. Wilson. He replied most gracefully and beautifully. I also had the pleasure of discussing your society with him last winter in his house, and whenever I see him, he delights to talk of these Institute experiences.” (At this time, the former Prof. “Tama Jim” Wilson was the U. S. Secretary of Agriculture).

We do not know how long the ladies and Carver corresponded. We do know that Carver enjoyed the friendship of the Floriculture Society ladies and that they held him in high regard. He occasionally sent them pamphlets describing the work he was doing.

George Washington Carver spent the rest of his life at Tuskegee as a scientist and teacher. He investigated plant diseases and advocated crop rotation. He also developed more than 300 food, commercial and industrial products from peanuts and over 100 products from sweet potatoes.

He died in 1943 and is buried at Tuskegee University. Always remember that Iowa played an important part in his success and that West Liberty had a “connection”.

Editor's note: Pam Schnittjer has been a resident of West Liberty for 50 years, studying local history including assisting the West Liberty Public Library in collecting historical data as well as serving as a past board member of the West Liberty Heritage Foundation. She helped produce Cemetery Theatre (2009-2013) and, around 10 years ago, presented local history programs with Bill Koellner. On West Liberty's 175th anniversary in 2013, she wrote articles for the Index with Ken Donnelly known as the “Wapsi Experience.” Special thanks for putting that together for our readers Pam.

Veterans Day services through the years