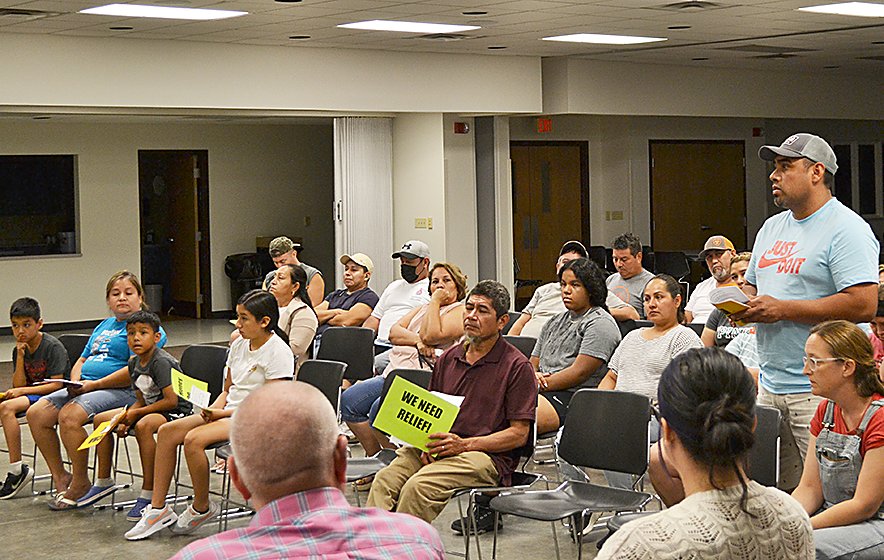 Edgar Velasquez, West Liberty resident and essential worker, asks the West Liberty City Council for answers on the proposal to give the ARPA funds to Escucha Mi Voz to distribute to essential workers who didn't qualify for government assistance during the pandemic .
Index photo by Xiomara Levsen
Posted Wednesday, September 28, 2022 9:05 am
By Xiomara Levsen, Index Editor

The groups were upset about city council not addressing their request for the American Rescue Plan Act (ARPA) funds to be given to Escucha Mi Voz. Escucha Mi Voz is a non-profit group under the Iowa City Catholic Worker agency. The Iowa City Catholic Worker agency said the city could give them the ARPA funds to distribute relief checks to the essential workers in West Liberty who worked during the pandemic but were ineligible to receive assistance from the government due to their immigration status.

Edgar Velasquez, who has spoken several times at city council meetings about this, was the first to speak through an interpreter. He said last month the city asked Escucha Mi Voz several questions about the excluded worker relief fund that they answered.

“You all have been in communication with David (Goodner, Director of the Iowa City Catholic Worker House) who has been explaining to you how you could organize these funds to be able to help us,” Velasquez said. “We would only like you to speak clearly to us and not give so many excuses like you have in the past.”

Every time they come and speak to city council, they leave thinking they will be getting help from the city, Velasquez said. However, when they return the support is forgotten. Unfortunately, there are families who have gone through a difficult time that haven’t been able to establish themselves and get ahead in this economy, he added.

“And then a bigger hit came to us, which was the high electricity bill,” Velasquez said. “And it’s because of this that we’re asking for your help. Really, there are families who need this.”

People chose the city councilmembers for change and equality, she added.

She mentioned the high utility bills. Hers has been $500 for the past two months. She changed over all her lights in her home to LED lights hoping it would decrease her bill. Instead, her utility bill got worse, she said.

Diaz said she didn’t know how the city charged for its utilities and many people couldn’t afford the $500 utility bill. Many people were deciding between paying their utility bill or keeping food in the home.

After several other people spoke out in favor or Escucha Mi Voz’s plan, former Mayor Katie McCullough spoke about why the ARPA funds haven’t been distributed to them.

McCullough acknowledged three votes in favor of the plan from the city council to give the ARPA funds to Escucha Mi Voz for distribution or for the city to do it.

“The issue as stated is not about the votes,” McCullough said. “Because if it was just about votes, you would have a unanimous council voting to write checks. Unfortunately, with this you cannot compare what Johnson County has to what we as a smaller city and entity are able to do.”

Johnson County has full-time staff of many experienced and dedicated working around the clock for several months to get their program off the ground, she added.

“And the city of West Liberty does not have these resources and unfortunately it is not as you perhaps have been led to believe as easy as us writing a check to another entity to disperse the money,” McCullough said. “One of the reasons Johnson County decided to administer this program themselves is because they couldn’t find an organization in Johnson County that met the criteria that the federal government has set to be able to do this work.”

McCullough spoke with grant administrators from Johnson County that morning about this. They told her they were going to ask for request for proposals (RFP) but didn’t.

She said she was sorry the citizens couldn’t see the work happening behind the scenes and the amount of time city councilmembers and staff have put into finding a viable solution.

“We want to give you this money,” McCullough added. “That was not a question and we voted unanimously earlier to try and do it. It’s a time, a capacity, it is an issue and so we are hoping to explore other ways such as utility relief that is not a check in your name.”

There are other options the city can try to pursue but it takes time and the people who are expected to do this work don’t have the capacity to do it, she added. The City of West Liberty also didn’t get the same amount of money such as Baltimore and Denver that have the resources to pay staff to administer the money.

“And again if it was as simple as writing a check, then we would have done so months and months ago,” McCullough added.

Other cities have told the city, this is a task they don’t have the resources for their proposal, she said. This doesn’t mean they aren’t trying to find another way to assist the essential workers.

“We have direction from the federal government in e-mail, that you’ve been given, saying that it is OK to give this money to a non-profit,” Sinnwell said. “We’ve reached out with several ways and it can be done so don’t tell them it can’t be done that way.”

“But when we give the money to a sub-contractor, which that would be, the city is still ultimately responsible,” McCullough said.

Sinnwell continued to argue with McCullough saying the city could do what they asked. She then started chanting “Si, se puede” in Spanish which means “Yes, you can.” The group of essential workers joined in with her.

After a few moments, McCullough took the gavel, banged it on the table and closed the public comment of the meeting.

The group left the meeting a little bit afterwards.