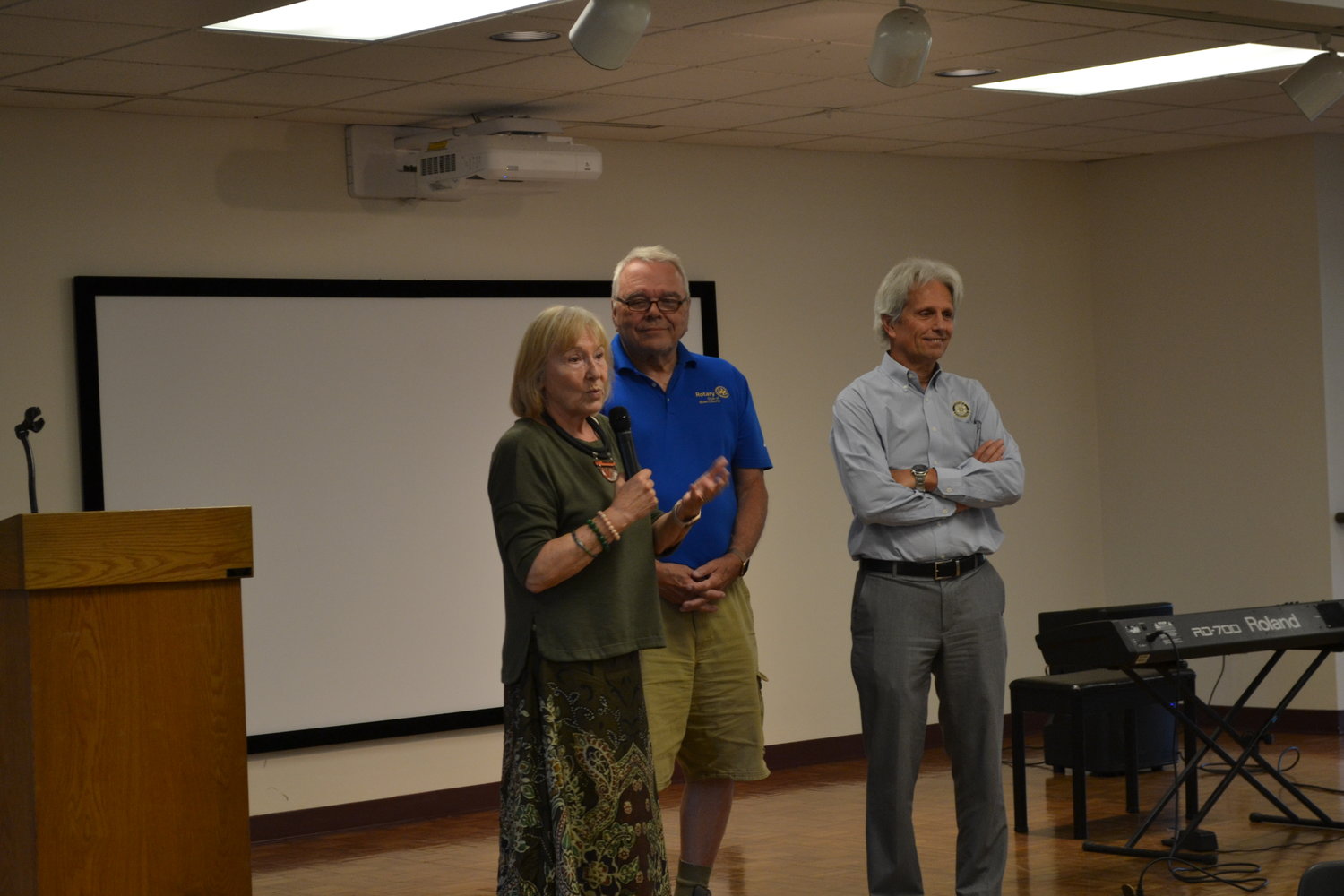 Anna Hanson tells everyone without their hard work it wouldn't be possible for her and Steve to be able to do what they do at an open house held in their honor Thursday, June 16, at the West Liberty Community Center while Bill Koellner looks on. Anna's husband, Steve (far right) smiles and nodded in agreement as she said this to the audience.
Index photo by Xiomara Levsen
Posted Wednesday, June 22, 2022 10:15 am
Xiomara Levsen, Index Co-Editor

A philanthropic couple was thanked for their 11 years of dedication to the West Liberty community last week.

Steve and Anna Hanson came to West Liberty 11 years ago when Steve took the position as superintendent of the school district. He and his wife quickly became deeply involved in several community causes and organizations. In 2021, Steve left the school district to become superintendent in Tama. The plan was to retire in West Liberty but recently they found a home in Cedar Falls by their grandchildren and decided to move.

When they announced they were moving, Bill Koellner thought something needed to be done to thank the Hansons for the commitment they gave to West Liberty, so an open house was held at the West Liberty Community Center Thursday, June 16.

Gretchen Nollman spoke about the Hanson’s time as members of the RotaryClub of West Liberty.

“Steve you were in for 17 years,” Nollman said. “Anna you were in for eight and you guys both held various roles within the club, both being president within years apart. Steve also graciously stepped up to be our secretary and our guru in Google teaching us all what to do there, so that will be greatly missed.”

The Hanson’s were also heavily involved in education and youth, Nollman added. They hosted multiple students for the exchange program in Rotary and were mentors for the youth and counselors as well. Steve also started The West Liberty Interact Program in 2015, which is going into its seventh year. Anna served as the liaison for the program.

“Steve, I know this year, you got two big awards,” Nollman added. “One within our district – The Garden of Integrity and you also got an international award – The Avenue of Service, which is very big for both of of you guys so you will be greatly missed.”

Ken Brooks, executive director of WeLead, also spoke despite not working with him directly on the WeLead board. Brooks said he made some phone calls to people and learned a couple of things about Steve.

“Anytime there was something that needed done, Steve was always the first to raise his hand and volunteer,” Brooks said.

Brooks said he has learned a lot about what the word volunteer means since he’s spent his career working for non-profits.

“People volunteer for one of two reasons,” he said. “Either they need something or they recognize that there is a need for something. People that need something volunteer because there’s something in them, there’s in a hole in them they need to fill perhaps. Perhaps they need volunteer hours for school or it’s a requirement for work. There’s always something they need but then there’s that second reason. People volunteer because they identify that different needs exist. This is when you go and you put the needs of others in front of yours and your desires and I can’t think of a better way of to describe to Steve and Anna than in that context.”

Anytime there was anything the West Liberty community needed, the Hansons stepped up, Brooks said. Whether it was through Rotary, through the school district or by serving on the boards of WeLead and the Chamber of Commerce.

“While I haven’t been here the 11 years you have all of the stories I’m hearing and my conversations prior is you’re always there,” Brooks said.

Priscilla Haessig, president of the West Liberty Community Center, talked about her history with the Hansons. She first met them as a school board member in 2009 when he applied but wasn’t chosen. In 2011, he applied again when the previous superintendent left before his contract ended.

Haessig traveled to Ottumwa where the Hansons were living to get to know the couple. She said everyone told her about how involved the couple was and how much they cared about their community, which seemed too good to be true.

“Eleven years later we all know what the Ottumwa people told us was true because Anna and Steve have been actively involved in West Liberty,” Haessig said.

In 2017, Steve joined the community center board as a representative for senior citizens, Haessig said. In 2019, he became president and held that office until he left for his new job in Tama in 2021. He helped the community center with several items including obtaining an industrial dishwasher from West Liberty Foods, was their technology expert and dealt with senior citizens who chose to discontinue their membership.

Haessig ended her speech thanking Steve for his time on the board and Anna for her time volunteering adding they will be missed.,

Monica Leo from the Eulenspiegel Puppet Theatre also spoke about the Hansons dedication to the town, calling them the backbone and vertebrae of the community.

“Anna served on our board for a long time,” Leo said. “We could always count on her to help out. I don’t know honestly how we’re going to do Children’s Festival without you and your regiment of high school kids that you solicited as volunteers then managed them with the aura as a general.”

“We have grown on the backs of everybody else,” Anna said. “It’s what everybody else helped us do and asked us to do and told to do and because of that we were able to get involved. We were welcomed. Everyone was very, very friendly and I hope Ken Brooks, Katie, his wife, who are new in town and have an essential in town feel that welcome here because this is an easy town to become part of.”

Anna said it was very difficult to leave a community she has come to love, she added. Steve saw the house in Cedar Falls and wanted to move, not her.

Steve joked it was Father Guillermo’s second funeral for the day because people were telling him and Anna what they meant to them. Steve then went on to say his first day in Tama he was having withdrawal from West Liberty because he didn’t get to see the people he worked with everyday like he did in West Liberty.

Steve went on to say that Anna and he were both involved in scouting and in church.

“If you live your principles, if you live your beliefs, that’s all we were doing,” Steve said. “And of course you get back at least as much as you give and that’s part of the secret. It’s very fulfilling and that’s who you are and you live that role.”

He said he thought since he was a school administrator it was an honor, duty and privilege to be involved in the community like he was.

“When you come to a community this size, it’s just impossible not to get involved in the community and West Liberty is home,” Steve added.

The only thing taking he and Anna away from West Liberty are their grandkids in Cedar Falls, he added. They were lucky enough to find a home right across the alleyway from them and decided to move closer to them.

The evening was a celebration for the Hansons but Steve said it was also for everyone who attended because each and everyone there also was involved in the community in some way.

“All of the people who spoke tonight, they gave so much of their time to the community and so we were a team, we were a part of them and it’s thanks to this good team that we could give as much as we could give,” Anna said.