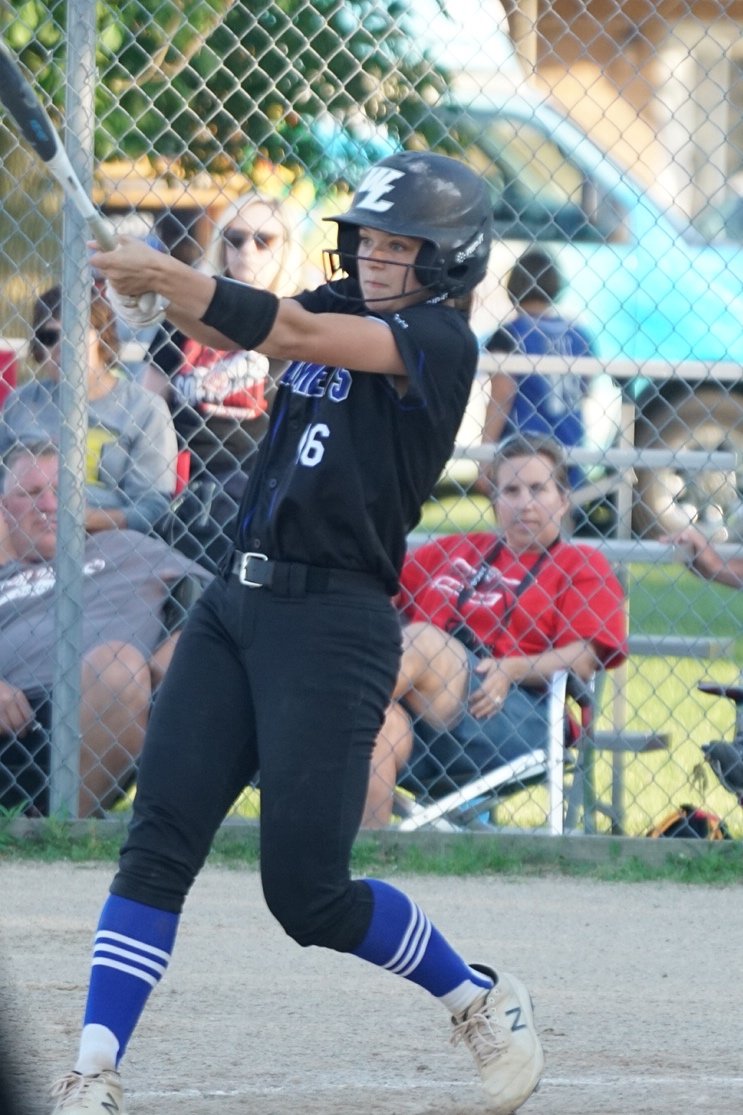 The Class 3A fourth ranked West Liberty High School softball team captured four wins this past week and their first outright River Valley Conference title in over three decades after ousting Anamosa and West Branch in conference play in between beating Walhert Catholic and Janesville in non-conference action at a two-day Don Bosco Tournament.

The week was split after the Comets suffered their first conference loss of the season at the hands of Durant in a rain shortened five-inning contest. The Comets sit at 14-1 in conference play headed into the final week of the regular season ahead of regional play, which begins on Wednesday, July 6.

On Tuesday, June 21, the Comets headed to Durant to take on the Wildcats, trying to beat the weather. The Comets struck first, pushing across a run in the first inning. The Wildcats answered back with one of their own in the second inning to tie the game. The Comet bats went quiet while Durant pushed across a pair in the fourth.

The Comet bats found spark again in the sixth as the storms rolled in. The Comets took the lead in the sixth, but their lead was wiped away as the game was lost to rain and revered to the previous completed inning, handing the Comets their first conference loss of the season, a big disappointment for the team of coach Matt Hoeppner.

Sailor Hall took to the circle again for the Comets, striking out two and allowing a walk while giving up four hits. She also pushed across the Comets lone run, scoring an RBI in the loss. Finley hall also had a double and a triple in the outing.

On Thursday, June 23, the Comets traveled to Anamosa, where it took awhile before either team was able to find any offense, but the Comets were finally able to get on the board in the third inning, pushing across a pair.

The Comets added another pair in the fifth to take a comfortable 4-0 edge. The Raiders comeback attempts in the sixth saw them cut into the Comet lead, but fall short, pushing across two runs. The Comets escaped with a 4-2 victory.

Senior pitcher Sailor Hall recorded her third win of the week on the mound, striking out six on one walk and giving up no earned runs. She added run support by way of a pair of RBI in the contest, going two of three at the plate, both doubles.

The Comets week ended with a couple of double digit scoring efforts over Dubuque Wahlert and Janesville Friday, outscoring both teams a combined 21-4 in the first day of their tournament at Don Bosco. Day two on Saturday was lost to rain.

Eighth grader Kiley Collins had the hot bat for the Comets, nailing four hits while scoring twice and bringing home a pair of RBI while stealing a base. Finley Hall added to the attack with four RBI on two hits including a double. Sailor Hall finished from the mound with two strikeouts.

Junior Kylie Struck was the big hitter for the Comets with four singles, scoring two runs, bringing home an RBI and stealing a base. Finley Hall contributed to the offensive attack with two hits including a pair of RBI.

Sophie Buysse, a freshman, pitched the shutout including striking out seven for the Comets.

On Monday, the Comets came back to their home field behind the West Liberty Elementary School to secure the River Valley Conference South title. The win came on a senior night honoring Sailor Hall and Grace Events.

After giving up a pair of runs in the top of the first inning, the Comets knotted the score with a pair of their own in the bottom half of the inning and then went on to score another run I the third before Sailor Hall lead a seven run rally in the fourth with a two run homer to take a 10-2 edge. The Comets added two more in the fifth to complete the mercy-rule win, 12-2.

Finley Hall had the big bat for the Comets with three doubles, scoring three times and driving in two runs while sister Sailor Hall had a pair of hits in driving in three RBI while she fanned nine batters from the mound for the teams 17th win of the season against four losses.

The Comets will end their regular season Friday and Saturday at the University of Iowa softball complex, taking on Williamsburg, Waukee Northeast, Iowa City Liberty and Mount Pleasant before heading into their first round Class 3A Regional matchup against West Marshall on Wednesday, June 6, on the home field behind West Liberty Elementary School beginning at 7 p.m.

The Region Six game pits the top ranked Comets against the 12-15 West Marshall team. The winner will play on Saturday, July 9, beginning at 7 p.m. in West Liberty against either second ranked Prairie City Monroe, a 15-9 team that hosts 9-15 Grinnell that same night. Other schools vieing for the title on the other side of the bracket are third ranked Roland Story, an 18-8 team, which will be playing 7-16 Nevada while Des Moines Christian, a 12-14 team and fourth ranked in the Regional, will take on 12-17 Ballard.

The highest ranked team will host the Regional championship game on Tuesday, July 12, beginning at 7 p.m., with the winner going to the eight-team state tournament on July 18-22 in Fort Dodge.