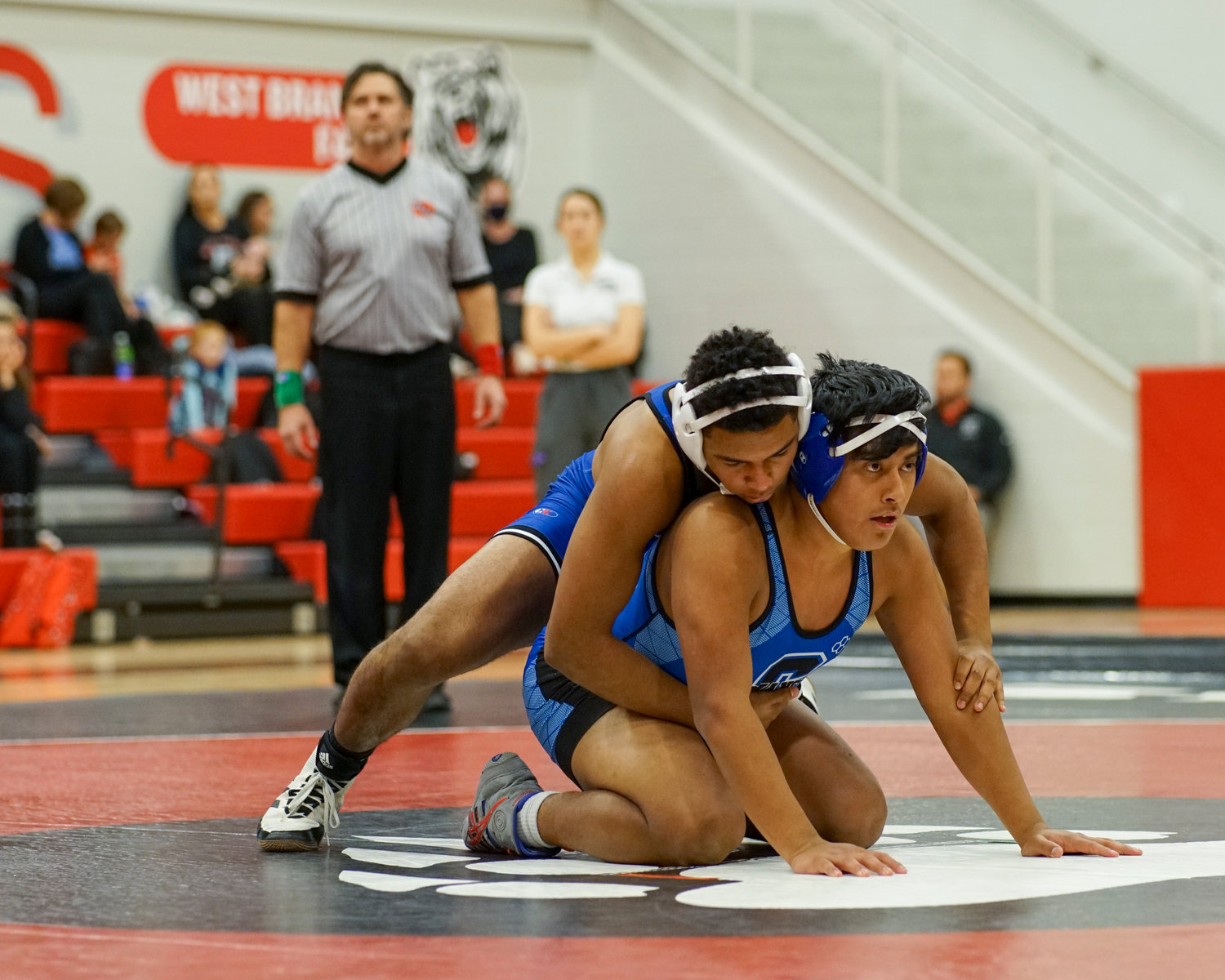 In an innaugural event, the West Liberty High School Comet girls hosted their own all-girls tournament on Monday, Jan. 10 as 62 wrestlers from 17 different schools participated in the four-person round robin event.

On Thursday, Jan. 13, the boys’ squad easily ran their River Valley Conference dual record to 10-0 with wins over Camanche and host West Branch.

While battling the Bears, Colin Cassady and Zeman recorded pins and Sanchez won by 9-0 major decision. Rocha, Ryan Cassady, Bryson Garcia, Barten, Collins, Molina and Galvan all won by forfeit and the Comets cruised to a 58-19 victory.

Inclement winter weather across eastern Iowa forced many tournament directors to cancel their events, including the Independence Girls Tournament on Saturday, Jan. 15.

The Ed Hadenfeldt Invitational in Solon, however, pushed back its start time and proceeded with its event. The competition at Solon ramped up this year with the addition of 3A #1 ranked Waverly Shell-Rock. Add in North Scott, Lisbon, Solon, Dike New Hartford, Iowa City Liberty, Center Point Urbana, West Branch, Durant, Clear Creek Amana, Cedar Rapids Prairie, Iowa Valley and North Cedar to scatter the field with freakishly great talent that included some of the states’ best wrestlers from all three classifications.

Junior Colin Cassady, the top seed at 106, went 3-0 to win a tournament championship. Starting with a first round bye, a quarterfinal pin in 1:15 and a 6-2 decision in the semifinals, Cassady faced freshman Cael Steinkamp of Center Point Urbana in the finals.

Cassady did not get past the first minute of the first period as he pinned Steinkamp in :32 to take the gold. With the wins, Cassady, ranked eighth in the latest IAWrestle rankings, ran his individual record to 30-4 for the season.

At 126, Dengler started his day with a 3:09 pin. He lost his next match by fall to drop to the consolations. Dengler suffered another loss, a close 9-8 decision in his third bout. He then rattled off a win by injury default and a nice 7-3 victory to place seventh.

Garcia, wrestling at 132, opened with a gutsy 7-6 victory. He then lost by fall to the eventual champ of his bracket. Garcia ended his tournament run with two more losses in a very competitive bracket.

At 138, Sanchez found himself in a buzzsaw of a bracket with 1A #1 Cade Siebrecht of Lisbon and 3A#1 Ryder Block of Waverly Shell Rock. After an opening round bye, Sanchez won a 4-3 match to reach the semis. There, he lost by fall to Siebrecht. Sanchez won his next match 16-1 and dropped his last match of the day by fall to finish fourth.

Zeman banged out two straight pins at 145 before dropping a 10-5 decision to Indy Harbaugh of Lisbon in the semifinals. After a 10-0 loss, Zeman rebounded with a 6-0 victory to finish fifth.

Preston Daufeldt stepped in at 152 and battled fiercely, but dropped his only two matches. At 160, Barten also was defeated twice to bow out of the double elimination tournament. Another jam-packed bracket was 170 with at least six ranked wrestlers, representing all three classes in Iowa.

Collins received a first round bye and won a 15-5 major decision in the quarters. After dropping that next matchup by a 11-3 score to Seth Madden of North Scott, Collins won two matches in a row over ranked foes, a 12-6 win over Brody Hoyt of Iowa Valley and a 3-1 overtime battle over Sean Mwangi of Waverly Shell Rock to finish third.

Molina took a similar path to Collins at 182, receiving a opening round one bye. He won a decisive 13-0 major decision victory in the quarters and dropped a 19-2 match to top seeded Nick Reinicke of Dike New Hartford in the semifinals to move down to the consolations. Molina went on the win by fall in the consi-semis and like Collins, needed an extra minute to win 10-8 in overtime to secure his third place medal.

At 195, the trend continued for Galvan. A first round bye led to a nice 4:13 pin for Galvan. In the semifinals he was pinned by 3A’s top ranked McCrae Hagarty of Waverly Shell Rock. Galvan came back with a solid 16-3 major decision victory and an exciting 5-3 overtime win to also finish third.

At 220, Joseph Akers lost both of his matches but hung tough in each one. Rounding out the Comet scoring, Rocha placed fourth at 285. He received a bye, won his next match by fall, lost by fall and earned a 7-6 winning score before defaulting in his final match.

As a team, the Comets placed fourth out of the 14 squads with 129.5 team points. Waverly Shell Rock utterly dominated the day, winning the team race with 324 points. North Scott (207) and Lisbon (184.5) rounded out the top three team finishes.

The Comets were absent from the mats until Thursday, Jan. 20, when they host the traditional senior night. The night will also carry significant importance as it will be a contest that will decide the River Valley Conference dual title beginning at 5:30 p.m.

The Comets are set to host Durant, Mid Prairie and Wilton in the showdown, which is also the last River Valley Conference dual night of the season. Head Coach Ian Alke requests that the town “show up” for the Comet grapplers and support his crew as they go after another significant milestone.

The following day, Friday, Jan. 21, the girls will compete in the 2022 IWCOA Girls State Tournament at the Xtream Arena in Coralville. The two-day tournament has over 740 girls from Iowa entered to compete.

The Comet boys will venture to Louisa Muscatine High School in Letts on Saturday, Jan. 22 for their annual event beginning at 10 a.m