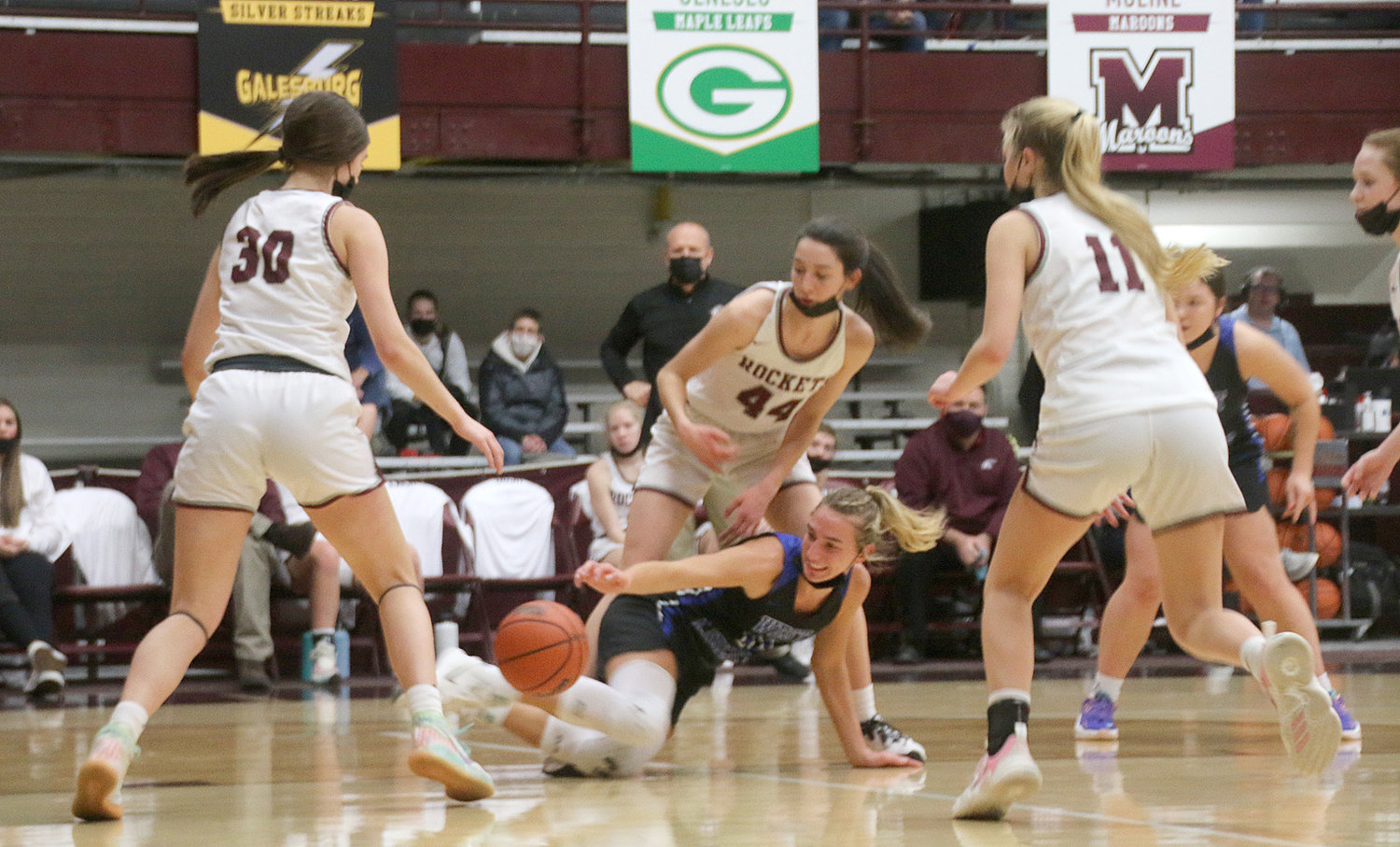 Macy Daufeldt is surrounded as she battles for the ball for the Comets against Rockridge on Saturday.
Scott Champion North Scott Press for the Index 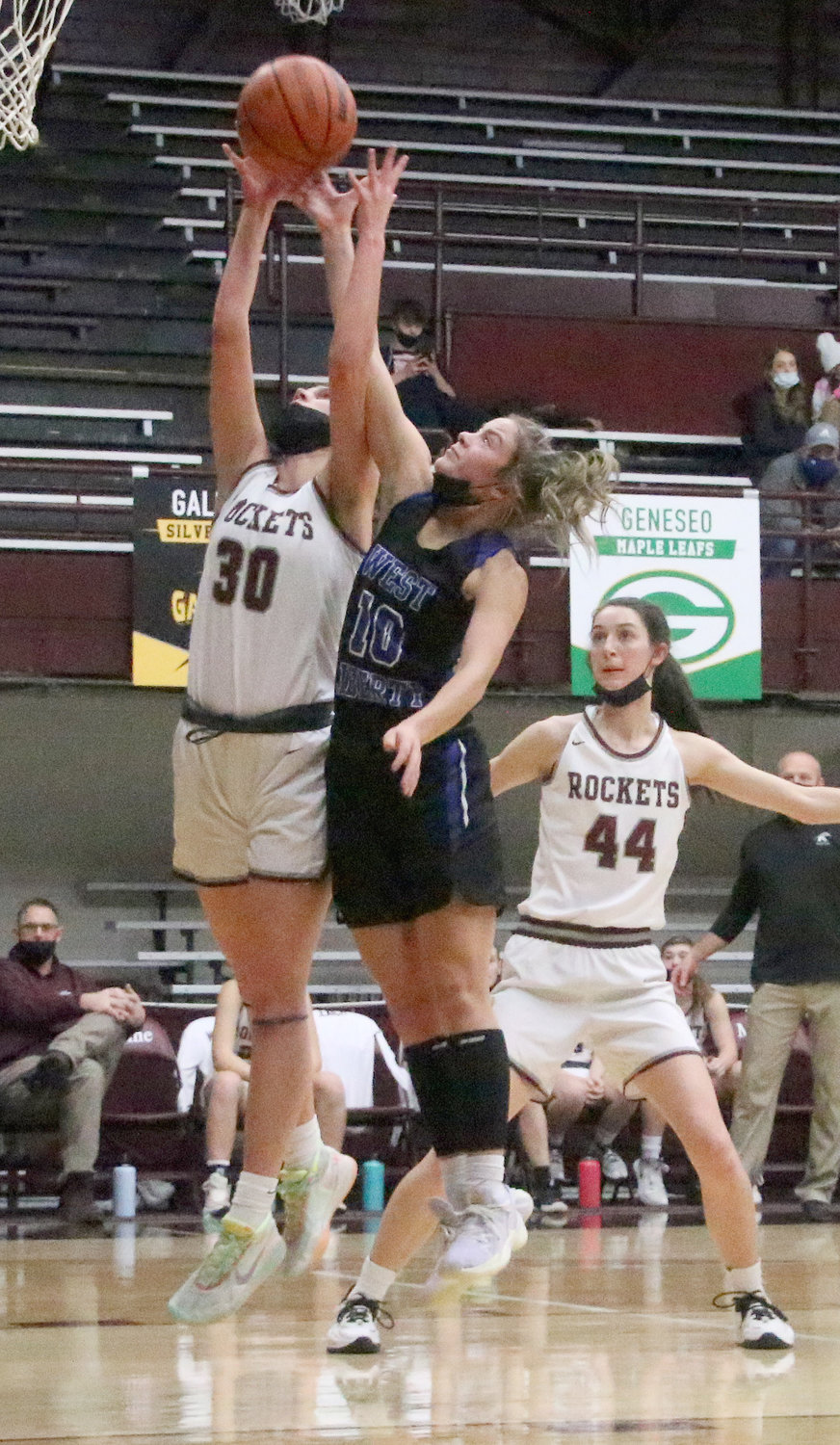 Coach Matt Hoeppner’s West Liberty High School girls basketball team started and ended their week with victories, including taking a win over neighboring rival West Branch on Tuesday, in a game that saw Comet Senior Sailor Hall etch her name as all-time career assist leader, before beating Rockridge of Edgington, Illinois on Saturday and then falling to Iowa City Regina that afternoon.

The girls fall to 8-3 overall and are tied with Regina atop the River Valley Conference south standings.

On Tuesday the Comets traveled to West Branch to play the Bears. The teams started out with a bang, trading baskets back and forth, both putting up 16 in the first quarter.

The pace slowed down in the second period, scoring just 12 points combined as the teams headed into the locker room tied at 22.

The Comets regained momentum on the offensive side on the third quarter, outscoring the Bears 15-9 and capturing the lead heading into the final quarter. The Comets held West Branch to just seven points in the final quarter as the emerged with a 52-38 victory.

On Friday the Comets played host to the Regals of Iowa City Regina and defense was a point of emphasis for both teams, as just 15 points were scored in the first quarter, the Comets leading 9-6. The Regals battled back in the second, tying the game at 17 and then rolled to a seven point advantage by the end of the quarter, ahead 29-22.

The Comets battled through the fourth but were unable to claim victory as the Regals pulled away late, taking a 12-point 37-25 victory.

Daufeldt recorded 12 points and 10 rebounds for the Comets while Finley Hall had seven and Sophie Buysse added six.

On Saturday the Comets headed to Moline to play in the IHMVCU Shootout against the Rockridge Rockets.

The teams struggled to find baskets in the opening quarter as the Comets clung to a 10-9 lead. Once the Comet attack warmed up in the second period, they were able to create separation heading into the half, outscoring the Rockets 20-10 and taking a 30-19 lead into the break.

Hot offense continued for the Comets in the third quarter, as the Comets added 17 points to their tally along with 10 more in the final quarter to take the 57-33 non-conference victory.

Through the 10 game showcase event, Iowa was 7-3 against the teams from Illinois.

Finley Hall had 22 points for the Comets in the victory along with seven rebounds. Daufeldt had 13 points and 16 rebounds. Pearson Hall nailed 12 points and sister Sailor hit seven. Brooklyn Buysse rounded out the Comet scoring with three.

The Comets travel to Mid-Prairie Friday for a 6 p.m. clash in RVC play before hosting Durant next Tuesday, Jan. 18, beginning at 6:45 p.m.