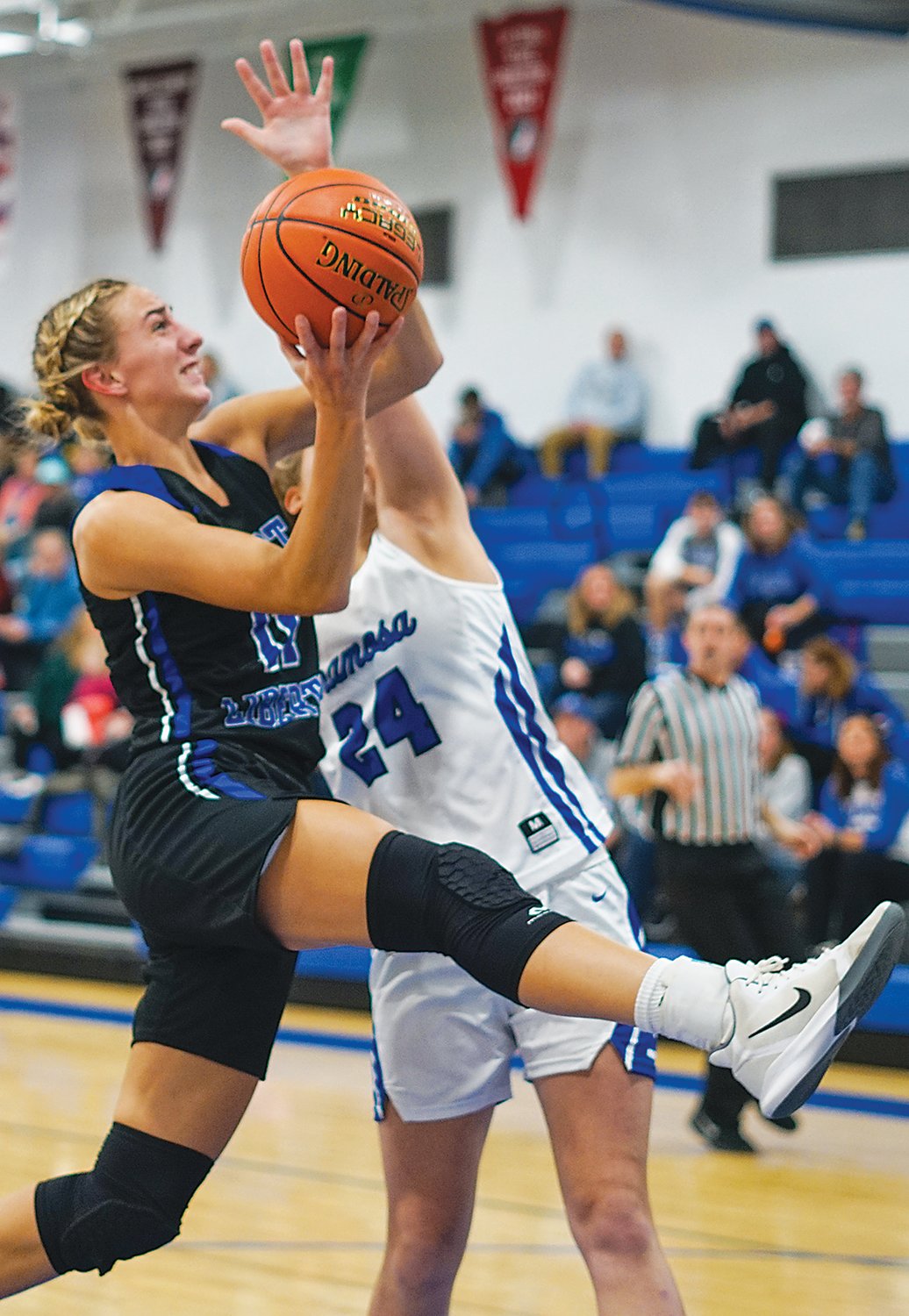 The West Liberty High School girls basketball team moved to 6-1 on the season after defeating Bellevue and Tipton at home and Anamosa on the road.

The Comets sit atop of the River Valley Conference at a perfect 6-0 heading into their final matchup of 2021.

The Monday, Dec. 13 matchup against Bellevue was off to a slow start. It took the offenses a couple of series to get started before Bellevue jumped ahead following a breakaway layup to give them an early 2-0 advantage.

The Comets responded by going on a 12 point run, sparked by a Finley Hall three-pointer to secure an 12-2 advantage midway through the opening quarter, eventually leading16-5 by the end of the period. The teams traded baskets for the majority of the second quarter, neither able to put together a sustained run, the Comets headed into the locker room leading 27-18.

Following halftime, Bellevue was the first team to find the bottom of the net, pushing through a three-pointer, leading to a five-point run before the Comets were able to respond via senior Macy Daufeldt.

The Comets used the spark to put together a 10-point scoring run and keep the Bellevue offense from scoring for five minutes into the closing 90 seconds on the third quarter before Bellevue was able to convert a three point play.

The teams scored just once more in the wanning minute of the quarter, as Sophie Buysse found an easy layup to give the Comets a 39-26 lead.

Sailor Hall buried a three-pointer to get the final quarter underway. Both sides battled back and fourth throughout the quarter, neither able to put together prolonged runs. The Comets emerged victorious, 52-42, to start the week.

Finley Hall led the way with 19 points while Daufeldt followed with 12 and Sailor Hall added eight.

On Tuesday, Dec. 14, the Comets hosted the Tipton Tigers and wasted no time getting a lead on their conference foes, as Sophie Buysse drilled a three-pointer to get the game started. That led to a seven-point run to force a Tiger timeout early in the opening period. The Tigers fired back with a five-point run before it was ended by Pearson Hall’s shot with 3:15 left in the opening period, Comets up 10-5. Sailor Hall’s three-pointer with 1:13 left awarded the Comets a 13-7 lead after the first.

The Tigers drew first blood in the second quarter before the Comets with on an eight-point run that ate the majority of the clock, leading 21-10. The Tiger defense was unable to stop the streaking Comets as the Comets put together another run to extend the lead while allowing just two Tiger baskets, leading 31-14 at the half.

The second half brought much of the same for the Comets, having their way offensively while shutting down the Tigers. The Comet scoring effort in the third quarter helped create separation, outscoring their foes 19-6. The same occurred in the fourth, outscoring the Tigers, 20-8, and capturing the 70-28 victory.

Daufeldt scored 26 for the Comets in the win along with six steals, five rebounds and an assist. Sisters Pearson and Sailor Hall trailed with 12 and nine respectively. Pearson notching seven steals. Sophie and Brooklyn Buysse scored eight and seven points respectively while Finley Hall finished with six and Paige Werling hit two.

The week ended with a trip to Anamosa on Friday. The Comets took control early, marching to a 13-4 lead. The Comets continued their onslaught, outscoring Anamosa, 26-2, taking a 39-6 lead into the locker room.

The teams played with a continuous clock for the majority of the second half but the Comets continued to build on their lead, outscoring Anamosa 17-6 in the half. Daufeldt scored 21 in the lopsided affair. Sailor and Finley trailed with 11 and eight.

The Comets head into the holiday break and will return after the new year on Jan. 4 against hosting West Branch, Jan. 7 against Regina in Iowa City before hosting Camanche to end the first week of the new year on the Jan. 8.