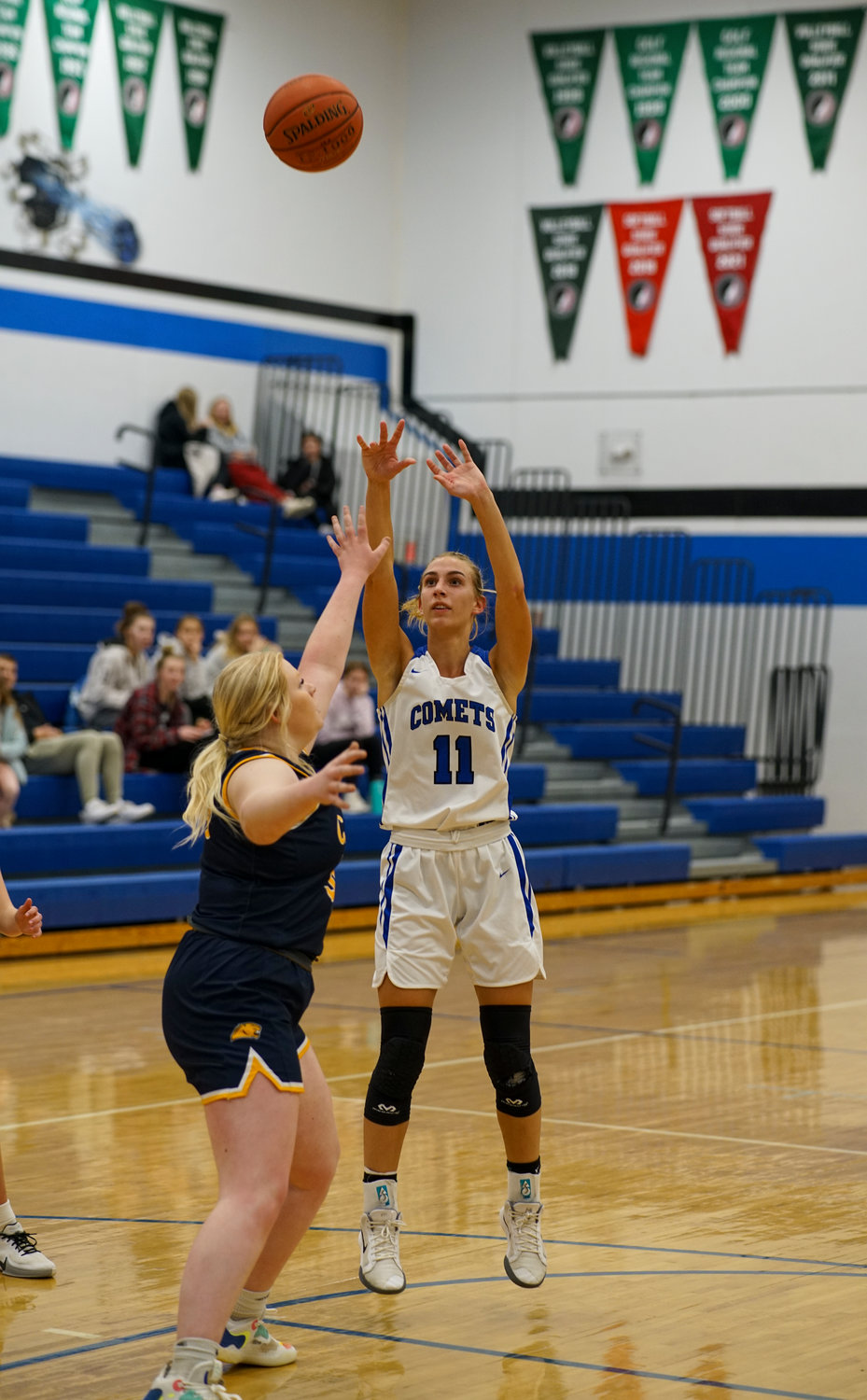 The West Liberty High School Girls Basketball team failed in their lone contest of the week to end the year, falling 39-37, in a tight battle with visiting Cascade in River Valley Conference play.

The Comets of coach Matt Hoeppner head into the holiday break 6-2 overall with a 6-1 conference record.

The Comets jumped ahead from the opening tip, securing the first possession. Macy Daufeldt found an open Finley Hall who buried a three to put the Comets on the board first. Following a Cascade layup, the Comets solidified their lead with baskets coming from Daufeldt and Sophie Buysse before the midway point of the opening quarter, leading 8-2.

The Cougars charged back, scoring back-to-back three pointers to tie the game before the Comets regained the lead after a pair of baskets from Daufeldt and stretched the margin off baskets from Sailor and Pearson Hall, leading 17-11 after the first period.

The Cougar attack found defense in the second quarter, holding the Comets to just a three pointer from Sophie Buysse, while scoring 15 of their own to take a 26-20 halftime edge.

Neither team was able to find much offensive production in the third quarter, the teams traded empty possessions before heating up late in the period. The Comets outscored the Cougars 11-7 in the quarter to pull themselves back within one possession heading into the final quarter.

The game pace slowed in the final quarter with Cascade nursing a small lead and the Comets wanting to make the most of every opportunity. It was Cascade who would score first, a three-pointer extending their lead to five with just over five minutes to play. The Comets regained the lead past the half-way point, as Daufeldt converted a three-point play, 37-36. Cascade reclaimed the lead with 14 seconds left, converting on two free throws. Finley Hall’s last shot bounced off the backboard and was no good, the scoreboard reading 39-37 Cascade.

Daufeldt led scoring with 16 points for the Comets while adding nine rebounds and a pair of assists in the contest. Finley Hall and Sophie Buysse followed with six each. Pearson and Sailor rounded out scoring with five and four respectively.

The Comets usher in the New Year with a road trip to West Branch on the Tuesday, Jan. 4 beginning at 6:45 p.m. before hosting Iowa City Regina on Friday, Dec. 7, also beginning at 6:45 p.m. and following up on Saturday, Dec. 8, with a 3:15 game against visiting Camanche after playing earlier that morning in an IHMVCU shootout hosted at Augustana College in Rock Island that begins at 11 a.m.