Coach Galvan: 'It wasn't our day'

West Delaware drops opener before winning it all 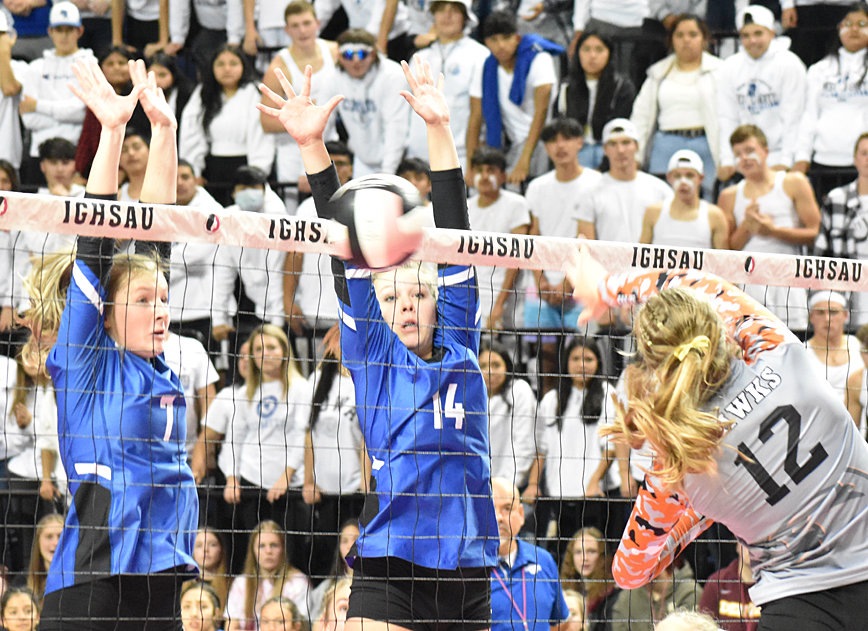 Ava Morrison and Maelyn Wainwright attempt to block a shot of a West Delaware hitter in the championship match.
Index photo by GM Derek Dawvell 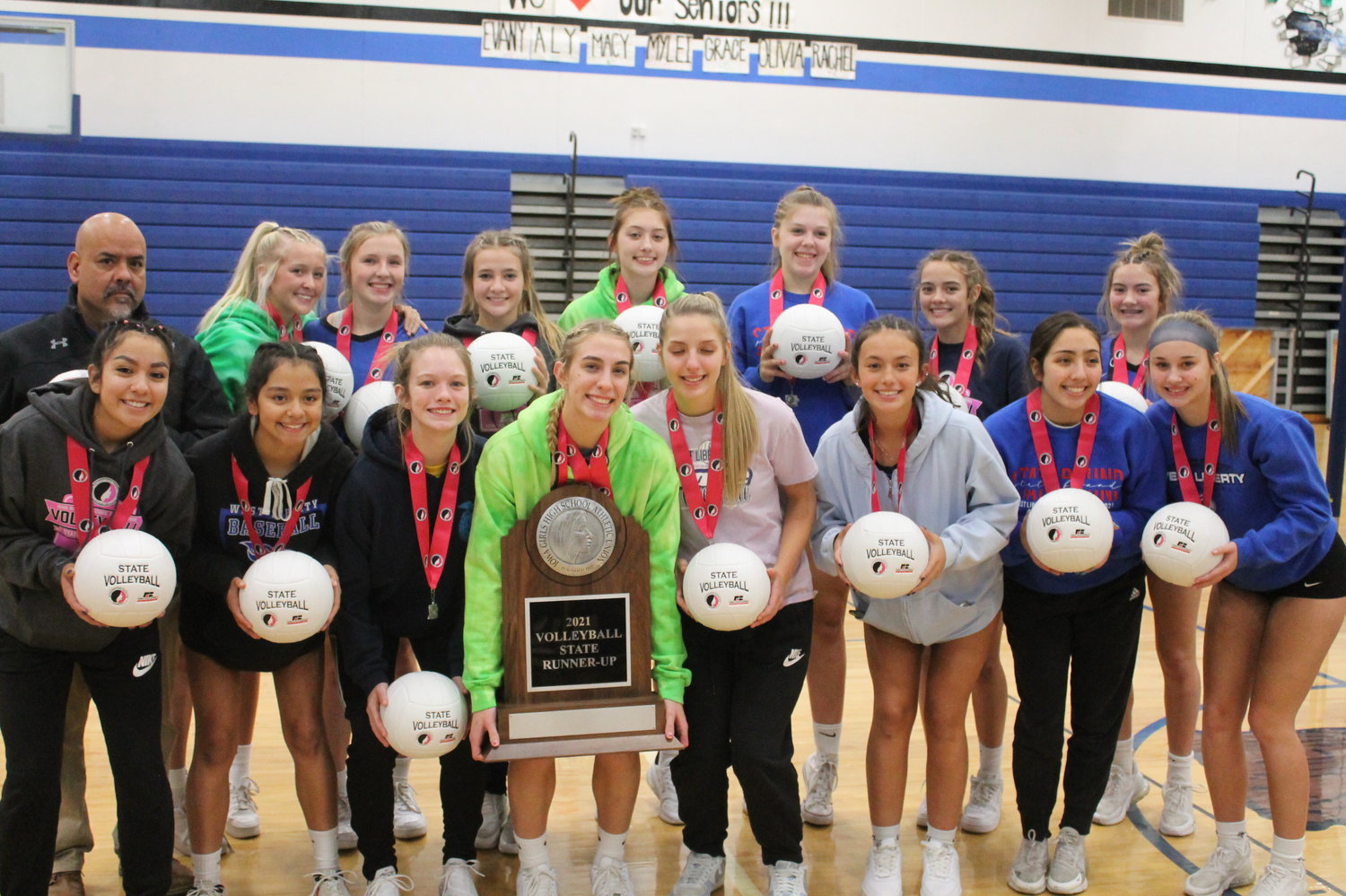 After winning the first set 25-21, the 42-5 West Delaware team that has earned their way into the State Tournament 11 times since 2006, came alive with wins of 25-9 and 25-20 to take control of the championship game before finishing with a 25-20 set win at Cedar Rapids' Alliant Energy Powerhouse.

The new 3A school this year that finished as the runner-up in Class 4A a year ago controlled the match following the first set, keeping the ball away from all-tournament captain and Drake recruit Macy Daufeldt as much as possible.

The senior had set new records for kills in the first two days of the tournament with wins over Mount Vernon and top-ranked Davenport Assumption.

West Liberty veteran coach Ruben Galvan agreed West Delaware runs a different attack compared to most teams, but thought his Comets adjusted well, although they played too much defense. “Once you're playing defense five or six points in a row, it wears on you,” Galvan said. “I thought we adjusted well, we did some good stuff and once we dug the ball we put the ball in the net or out of bounds.”

“They’re a heck of a team. They kept the pressure on us the whole match,” said West Delaware coach Brett Mather of the Comets after the game. “In game one, they finished better than us. We had a few errors at the end that they capitalized on.”

He said game two went different, noting his team played their best game of the match. “We were doing the ‘little things.’ I thought we did a good job. Defensively we made a ton of digs tonight.”

The coach said the team had strategies in trying to slow down Daufeldt. “We switched line-ups. She’s an incredible hitter – in my opinion, the best hitter in the state,” Mather said. “I think playing her on day three of the tournament is a lot different then playing her on day one. She had a ton of jumps in, particularly in the second round with it going five sets. Her legs had to be a little tired.”

“What a great player,” the West Delaware coach continued. “I’ve heard great things about her outside of volleyball as well. She’s gonna get kills – no doubt about it. Our philosophy was its one point. When she gets those great kills it's just one point and we need to move past it.”

“You can’t take anything away from them (West Delaware) but I think we gave them a lot of points and we weren’t contesting well,” Galvan continued. “We missed a couple serves in the fourth game that were crucial that could have swung the momentum and we didn’t take advantage of it.”

Galvan is quite proud of his team. “I can’t say enough about these girls. I don’t think anyone in the state thought we’d be here but, with the freshmen we have, I think they’ve really grown up from the beginning of the season to now.”

The coach said the seniors set the standards for the program. “Hopefully it keeps the younger kids hungry and they continue to work hard,” he finalized.

West Liberty opened the championship game with West Delaware popping out the first four points, but Daufeldt got the Comets back in the game with some hard hitting kills and the team eventually closed the gap to 8-7 and eventually tied it at 11 in gaining momentum.

The match was tied at 12, 13, 14 and 15 before West Liberty took a 19-17 lead on a blocked shot. But the Hawks scored twice to tie it at 20 before West Liberty put together five of the next six points to take the win, the final point coming when the Hawks couldn’t handle a Daufeldt spike, hitting the ball into the net and giving the Comets a 25-21 opening match victory.

In the second set, West Liberty started out well, rolling to a 4-1 lead before an ace by standout Alivia Schulte put the Hawks on the board and West Delaware continued to roll, building a 9-4 lead before a West Liberty time out.

It didn’t seem to help as the Hawks scored the next five points to roll to a 15-4 lead. West Liberty was outscored 10-5 through the rest of the set, the Hawks playing strong at the net with some huge blocks to take the 25-9 win.

The all-important third set saw West Delaware, a school located about midway between Dubuque and Waterloo, roll to a 2-0 lead before the match became intense, neither team taking much of a lead until the Hawks built a four-point margin at 10-6. But it was West Liberty that would come back to within one at 10-9 thanks to some fine serving from McKinzie Akers. West Delaware coach Brett Mather, in his 28th season with over 900 wins, had West Liberty figured out.

West Delaware would roll to a 24-20 lead but the Comets could only get one more point and found themselves down 2-1 in sets with the 25-20 loss.

Now it was only a matter of finishing off the Comets, struggling after a hard fought five-set match the day before against top-ranked Davenport Assumption. The Hawks wanted the state title after finishing five times since 2007 as the state runner-up.

The Comets cut the margin to three, but could never get any closer, although hoping to make a run at 23-20 on some fine serves by Akers. But following a West Delaware time out, it was all Hawks, claiming another 25-20 win.

West Liberty had two girls make the all-tournament team as senior Macy Daufeldt was named captain of the team, a first for West Liberty, and freshman Sophie Buysse was also named to the team, another first for the Comets.