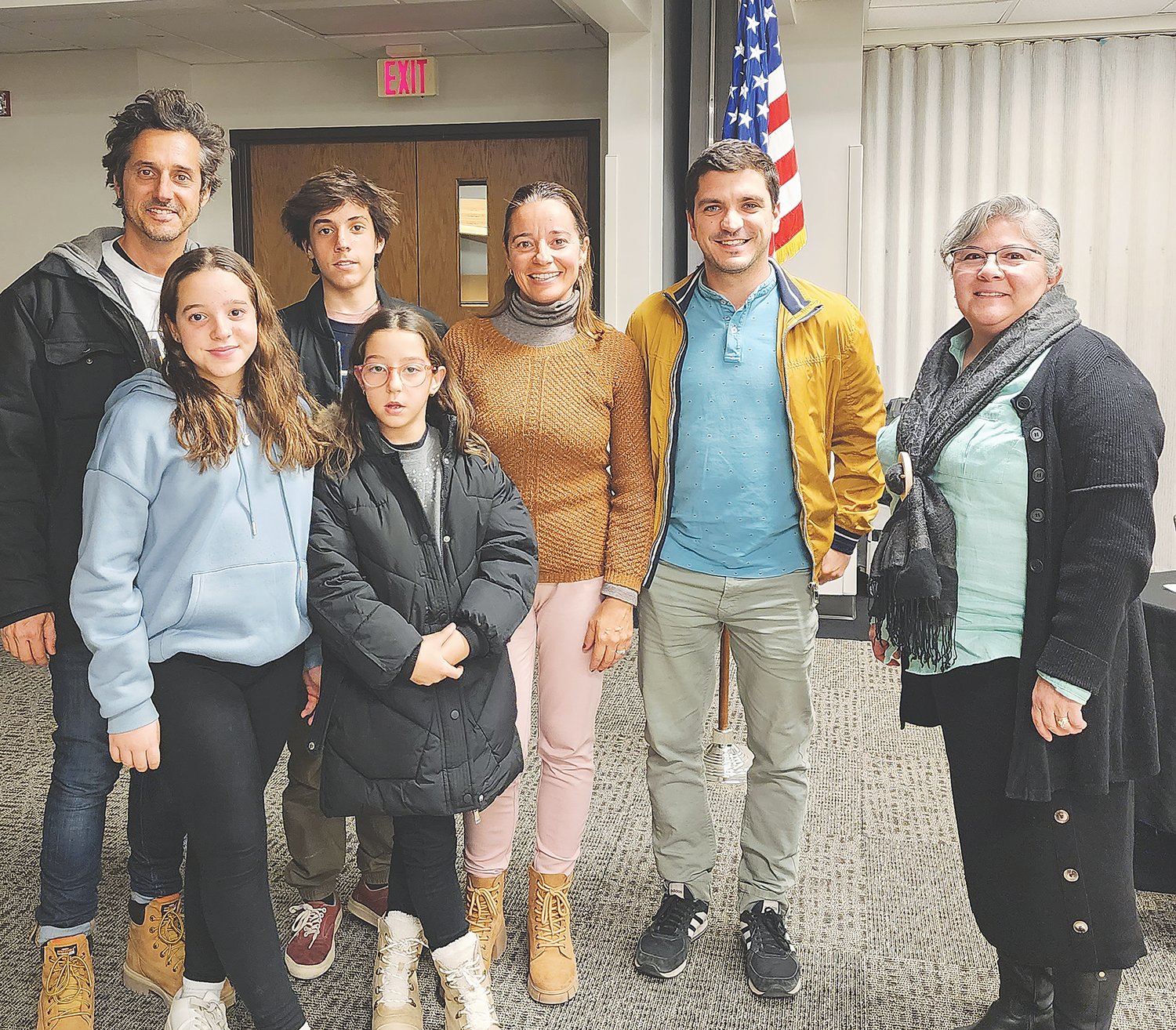 Pictured from left in the back row are Manuel , Manuel 'Manu' and Ana Blanes, Jose Cano and West Liberty Mayor Pro-Tem Cara McFerren. Pictured in the front row from let are Garcia and Carmen Blanes.
Index photo by Brenda Arthur - Miller
Posted Wednesday, November 9, 2022 11:56 am
By Xiomara Levsen, Index Editor

The residents are teachers from Spain and Mexico working in the West Liberty Community School District’s Dual Language program.

Mayor Pro-Tem Cara McFerren said she wanted to recognize them because the dual language program benefits the community and the students.

Ana Blanes is from Palma de Mallorca, Spain. She teaches third grade at the elementary school and will be here for three years.

Palma de Mallorca is a small island in the Mediterranean Sea, Blanes said. It’s very touristic and not as cold as Iowa.

“But we enjoy being here and the cultural exchange,” Blanes added. “Letting the students know how is Spain and how it is quite different.”

Blanes is married and has three children attending school in West Liberty. Her husband is Manuel, who is a businessman back in Spain; her son Manuel attends the high school; her 11 year old daughter Garcia attends the the middle school and her youngest daughter Carmen attends the elementary school.

Blanes said her children have really enjoyed their time in West Liberty so far. Each of them has made friends in their new schools and and have learned about the differences in culture in the United States compared to Spain.

Jose Cano is from Murica, Spain, which is a small town in the southern part of the country, he said. He teaches second grade. When McFerren asked him how long he planned to teach in West Liberty he said he wasn’t sure but has enjoyed being here so far.

Teresa Castello Coscolla teaches fourth grade at the elementary school. She is from Mexico. She wasn’t able to attend the city council meeting that evening.

McFerren welcomed the group to Iowa and thanked them for coming to teach in West Liberty.

“And we have to thank all the staff,” Blanes said. “They are very, very nice.”

“We will be celebrating 25 years next year,” Arthur-Miller said.

Arthur-Miller provided The Index with more information on the dual language program a couple days after the city council meeting.

The dual language program started in 1999, she said. The school district applied for a Title 7 grant, which made it available for students from preschool to fourth grade.

When the grant funding ran out, students in fourth grade who had a few years of teaching in the dual language program attended a school board meeting asking them to fund the program, Arthur-Miller said. The school board voted to do so and began using the district’s general funds for the program.

The enrollment in the dual language program has remained steady since it started. The school district has between 21 to 26 percent of its student body enrolled in it, which helps students who are learning English as a second language are get the services they need, Arthur-Miller added.

“Every year since I’ve been here we’ve had teachers from Spain,” she added.

Other school districts have contacted the West Liberty Community School District to inquire about the dual language program.

“We’ve had schools across the state contact us and some from Illinois,” Arthur-Miller said. “Before COVID, we would host teachers and administrators for a day so they could see how the program works.”

The Muscatine Community School District is going to start a dual language program next year for the preschool and kindergartners, she added.