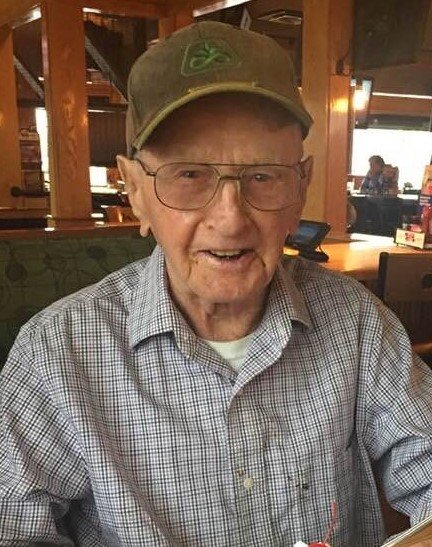 His family later moved to a farm in the Nichols area. He attended country schools until the 8th grade. He assisted on the family farm and hired out to area farmers.

While eating at Kar's Lunch Car in West Liberty, a young lady caught his eye. He rode his horse to her house in the evening to visit and rode home in the dark. One night, it was dark enough out that he struck a mailbox with his leg, hard enough it knocked him off the horse. This did not deter him from continuing to visit. They were married at the bride's home on Feb. 23, 1941.

In 1947, they bought a farm south of Lone Tree. They farmed the 80 acres he owned and an additional 80 acres he rented raising corn, beans, oats, hay, pigs, sheep and chickens. They had a dairy herd, later traded for a beef herd. He also worked seasonally at the Heinz plant in Muscatine.

While he was still milking, he took a second shift job at Heinz. Cows needed to be milked every 12 hours so he milked at noon, went to work and then came home to milk at midnight.

When he stopped renting the additional 80 acres, he took a job as a forklift operator at the new Heinz warehouse in Iowa City. He unloaded the first pallet that came in to the new warehouse and loaded the last pallet that left the warehouse when Heinz closed the plant. When it was time to replace lights in the ceiling of the warehouse, the manager asked the maintenance man if he would be willing to be raised up on a pallet to change the bulbs. The maintenance man agreed with the stipulation that Carl was the one running the forklift.

Carl and Wilma loved to dance, starting in people's homes in the early years and later dance halls throughout the area with many dear friends. They were the winners of many anniversary dances being the longest married couple still on the dance floor.

Carl was a horse lover, always having a horse on the farm and attending the trail ride in Eminence, MO for 20-plus years.

He loved to hunt and fish, harvesting his last deer with a crossbow at the age of 94. He marveled at the works of Mother Nature, from largest of animals to the smallest of insects. He loved to tell stories of days gone by.

Two days before he passed, he told about the winter of '36, when there were 10 days in a row that never got above zero degrees and snow was as high as the fences.

Carl was not a cold weather person. Baling hay in 100 degrees was right up his alley, fixing frozen hog water heaters at zero degrees not so much. He and Wilma were able to snowbird for 20-plus winters in Arizona and Texas. They made many lifelong friends during those trips.

Thirteen years into marriage, he and Wilma were blessed with a son, Rick, who he loved and taught many life lessons, most importantly how to work until a job was done. Carl loved his daughter-in-law, Sherry, and his two grandchildren, Ashlee (Brenton) Woods and Alex (Madeline) Ogren, "The Girl Kid" and "The Boy Kid" as Carl referred to them.

And the final apples of his eye, Cohen and Ailey Woods and Lynden Ogren. Carl was always asking about Cohen's ballgames, Ailey's dance and commenting on Lynden, "The Chunk".

Per Carl's wishes of no "big ta-do", a small family service will be held.

In lieu of flowers, memorials may be directed to the Ogren family in memory of Carl. Sympathy notes may be left for the family at www.sandhfuneralservice.com.

The Snyder and Hollenbaugh Funeral and Cremation Services of Lone Tree is caring for his family and arrangements.