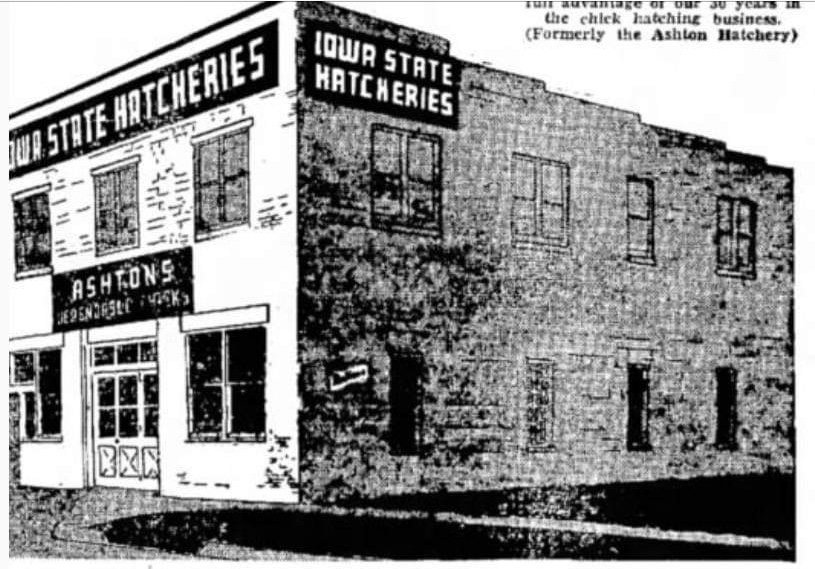 John Ashton, of Muscatine, operated a chicken hatchery at 317 North Spencer Street in the 1940's. He changed the name from Ashton Hatchery to Iowa State Hatcheries producing over 1,000,000 chicks a year.
Photo contributed
Posted Wednesday, June 29, 2022 10:55 am

For our look back into West Liberty history this week, I’ve selected the west side of the 300 block of N. Spencer Street.

Last month, WeLead’s Director Ken Brooks announced that the building at 317 North Spencer will receive a $200,000 grant through the Iowa Economic Development Authority’s Downtown Housing grant program. This historic building will be turned into commercial space on the ground floor, and into two three-bedroom apartments on the second level.

In April of 1868, the son of a Wilton minister launched our town’s first newspaper, The West Liberty Enterprise, at 315 North Spencer. Because of the high cost of machinery, the newspaper was printed in Wilton until November of that year.

At that time, the paper was sold to C.D. Eaton and George Trumbo. A printing plant was installed in a small frame building at 315 North Spencer. By the 1900's this paper had merged with others, and it was named The West Liberty Index. It moved from Spencer Street to Third Street, where The Brick Street Gallery is located today.

Years later, when Louie Wiese added a second story to the building next door at 317 featuring five modern apartments, he also built a structure to the south of where the printing plant had been. J.C. Nichols operated a tin shop there.

Early records show an ad placed in 1879 stated: “Billy McCaw has opened out in the old brick shop on Spencer Street, where he is prepared to do all kinds of blacksmithing, asking his old friends and customers to give him a call and a fair share of the trade.”

It’s unknown how long McCaw stayed at 315, but fairly soon he moved his business to 412 North Calhoun, where he stayed until the early 1900’s.

In 1909 Ditmars Kerr and Company built at 317 North Spencer to sell automobiles. This was the first such business in town. They sold Overland, Moline and Paterson autos. With the advent of tractors and other farm machinery, however, the car part of the business was sold in 1911 to Charles Waite.

Ditmars Kerr owners found that automobiles were much higher maintenance than tractors, mostly due to the sometimes-bottomless muddy roads, and the mud that would pack up between the wheels and the fenders and freeze solid in the winter. It was definitely more work than they wanted, hence dropping that line of the business.

After Ditmars Kerr sold the garage to Waite, the repair shop for the tractors was moved to their other location at 200 E. Third. Waite had lots of work to do. He sold autos and did service work. The early autos needed lots of maintenance to keep them going. Tires were not of high quality, so there were always flats to fix, and always mud to clean from underneath.

About 1914, Louie Wiese bought the building, and about that time he built the aforementioned second level.

The first story was a car dealership and repair business. Wiese offered complete body and fender repair and day and night towing service. It grew to a staff of five: four men doing the repairs, and one office girl. Over the years, they dealt in Buicks, Pontiacs and Oldsmobiles.

Wiese commented in 1938, "We have customers that have been with us who bought their first Buick 24 years ago, and are still driving Buicks. We also have customers who buy their used cars from us year after year which signifies that they are satisfied with a reliable dealer, rather than take long trades."

Wiese was in the automobile business at the same location longer than any other dealer in eastern Iowa during this time.

It’s believed that at some point during Wiese’s ownership of 317, the large ‘gap’ between 315 and 317 was filled in, making it just one building.

After Wiese died, William Meredith took over and operated it as a Buick dealership. Lee Forsythe eventually purchased the business from Meredith and then moved it to the cinder block building just across the railroad tracks on Columbus Street, which in later years was occupied by Cline Farm Equipment and now West Liberty Auto Parts Center and CarQuest.

John Ashton of Muscatine, who operated a chick hatchery business there named Sunnyside Hatchery, moved to West Liberty in 1926 with the intent to start a similar business here. Sunnyside was one of the first commercial hatcheries in the state of Iowa.

Ashton built a large frame structure and went into business that year on Maxson Avenue, near the railroad tracks, named Ashton Hatchery. West Liberty proved to be the ideal location for shipping, and the ground selected by the man from Muscatine gave him a fine spot in business.

All went well until a fire in 1943 burned the place to the ground. After the former fire, Ashton was able to purchase the old Buick dealership at 317 North Spencer for his chick business, renaming it Iowa State Hatcheries. Just four months after the fire, the new Spencer Street hatchery opened.

Iowa State Hatcheries produced over a million chicks a year. In addition, Ashton had locations in Muscatine, Lone Tree and Cedar Rapids. For about five years he also owned a plant in Arkansas for the broiler trade.

After the plant opened, and started shipping chicks all over the country by parcel post, the US Post Office in West Liberty was upgraded to a Class A post office.

In order to fill all the orders, Ashton’s wife Mary wrote, the hatchery contracted with select farmers in the three-county area, allowing the hatchery to control the breeding selection by culling out birds that didn’t come up to standard. In exchange, the hatchery paid the farmers premiums of 20-30 cents a dozen over market price. This was a very good deal both for the farmer and the hatchery, Mary said.

The Japanese had discovered how to tell the sex of the chicks, which was a trade secret and taught only to someone of that nationality. This became a big problem after the bombng of Pearl Harborin WWII. The hatchery industry did get some of these people excused from internment who had American citizenship. They, in turn, taught some other Americans part of the art.

"Even so, in the first years of the war we had them come to the hatchery at night to avoid any riots while feelings were running so high," Mary said.

Ashton retired in 1953 to his home on Sixth Street, where he enjoyed gardening, specializing in berries, raspberries, and strawberries. He also grew a wide variety of vegetables in his gardens.

The building at 317 North Spencer was sold to the Waites, and Clyde Essex started an auto repair business. West Liberty Auto Parts Store moved in next.

Later, the building operated as the Bargain Box store, then it became a private residence. It’s now vacant.

The building at 315 was razed earlier.

Sale barn once a flury of activity