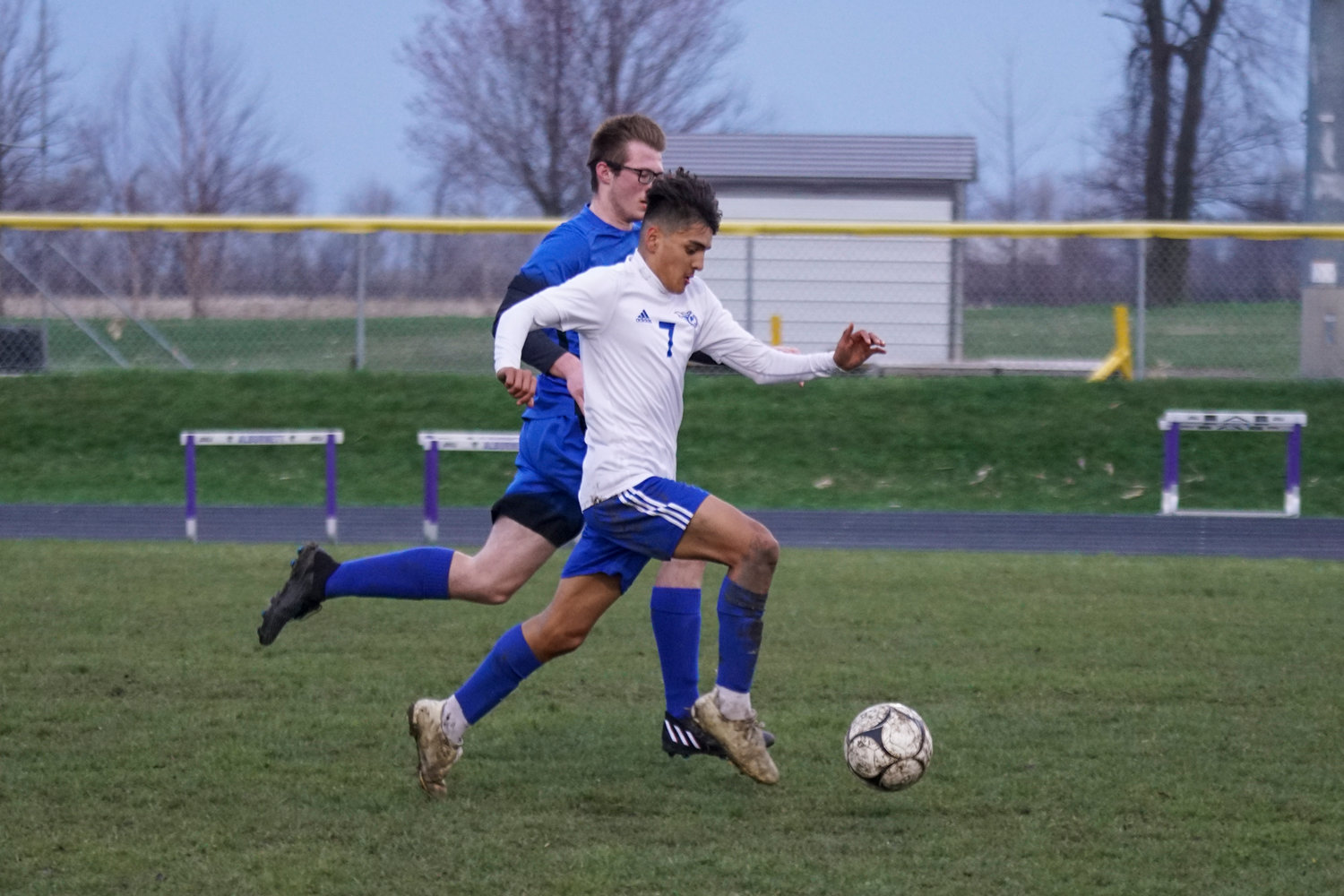 Juan Mateo had quite the week in scoring goals for West Liberty.
Kohlton Kober for the Index
Posted Wednesday, May 11, 2022 10:10 am
Tim Evans, Index Editor

After playing Muscatine to overtime a year ago, the West Liberty High School boys’ soccer team made a couple of drastic mistakes early and found themselves in a 2-0 hole – too much to make up as the Comets of coach Walton Ponce lost only their second game of the season, calling 3-1 to the Muskies.

Later in the week, the hosting West Liberty boys got back on track with a 7-3 win over larger class Clinton.

Coach Ponce said his team made a comeback against the Muskies in the make-up match that was supposed to start the season. “We came back and made it 2 to 1 and were very dominant for the end of the first half and beginning of second and had a lot of pressure against them but we were not able to convert,” the coach said. “We then gave up a corner kick goal which deflated our efforts at the end.”

The Muskies scored first in the 15th minute of play, taking an early 1-0 lead and then scored again in the 21st minute to find an early 2-0 advantage, before Joshua Zeman gave the Comets hope when the senior scored just two minutes later, putting West Liberty down just one goal, 2-1 going into the half.

The Muskies’ final goal of the contest came late in the 54th minute to deflate the hosts, who fell 3-1.

Ponce said Muscatine is a “very athletic and hard working team, which I expected.” He said there were a couple of factors in that game that didn’t go the Comet’s way.

“We gave up a silly goal in their second goal. We also missed a couple of kicks that we just couldn’t put away while their goalie did a good job.” He said there were a couple of calls that didn’t go in favor of the Comets when getting fouled in the box. “Not taking anything away from Muscatine, but we knew that it was a game that just got away from us,” Ponce said.

On Friday, the Comets played host to the Clinton River Kings and Ponce said his team gave up a couple of “silly goals” but said his team showed their dominance throughout the night to take the four point win, 7-3.

The Comets pounced upon their royal foes, outscoring them 5-1 in the opening half of the contest. The tides didn’t change for Clinton headed into the second half, who kept pace with the Comets, but were unable to close the gap.

A hat-trick from Juan Mateo headlined the Comets offensive assault, the first coming just three minutes into the game before he hit the third goal for the Comets at 21:30 and the final goal with 21 minutes left off an assist from Diego Sanchez.

Jahsiah Galvan added two more goals for the Comets, coming at 12 minutes in the first half off an assist from Felipe Molina and the second coming at 34:41 in the second half on a penalty kick. Pascual Pedro hit a header goal with eight minutes remaining in the first half off a cross pass from Mateo and Diego Hernandez also got on the board with a surprising 25 yarder past the goal keeper.

Coach Ponce said his team played great offensively, creating “great chances,” but said his team needs to clean up their backcourt play. “If we stop shooting outselves in the foot, we have a chance to beat anyone,” he said.

The Comets played 1A top-seeded Davenport Assumption Tuesday evening, the coach calling it an “opportunity for us for a statement win as we are now ranked only number 14.”

The team opens sub-state play with hopes of getting back to the final four as they did a year ago. Teams in that bracket include GCGR – Grundy Center, Hillcrest Academy, Mid-Prairie, PCM, Pella Christian, Sigourney, and Williamsburg.

The presently 8-2 Comets first go up against Anamosa, a team which has won only one game this year, on Friday, May 12, beginning at 6 p.m., at Downing Field in Anamosa.

The team also hosts Mid-Prairie on Tuesday, May 17, in a 6:30 p.m. match to end their regular season.