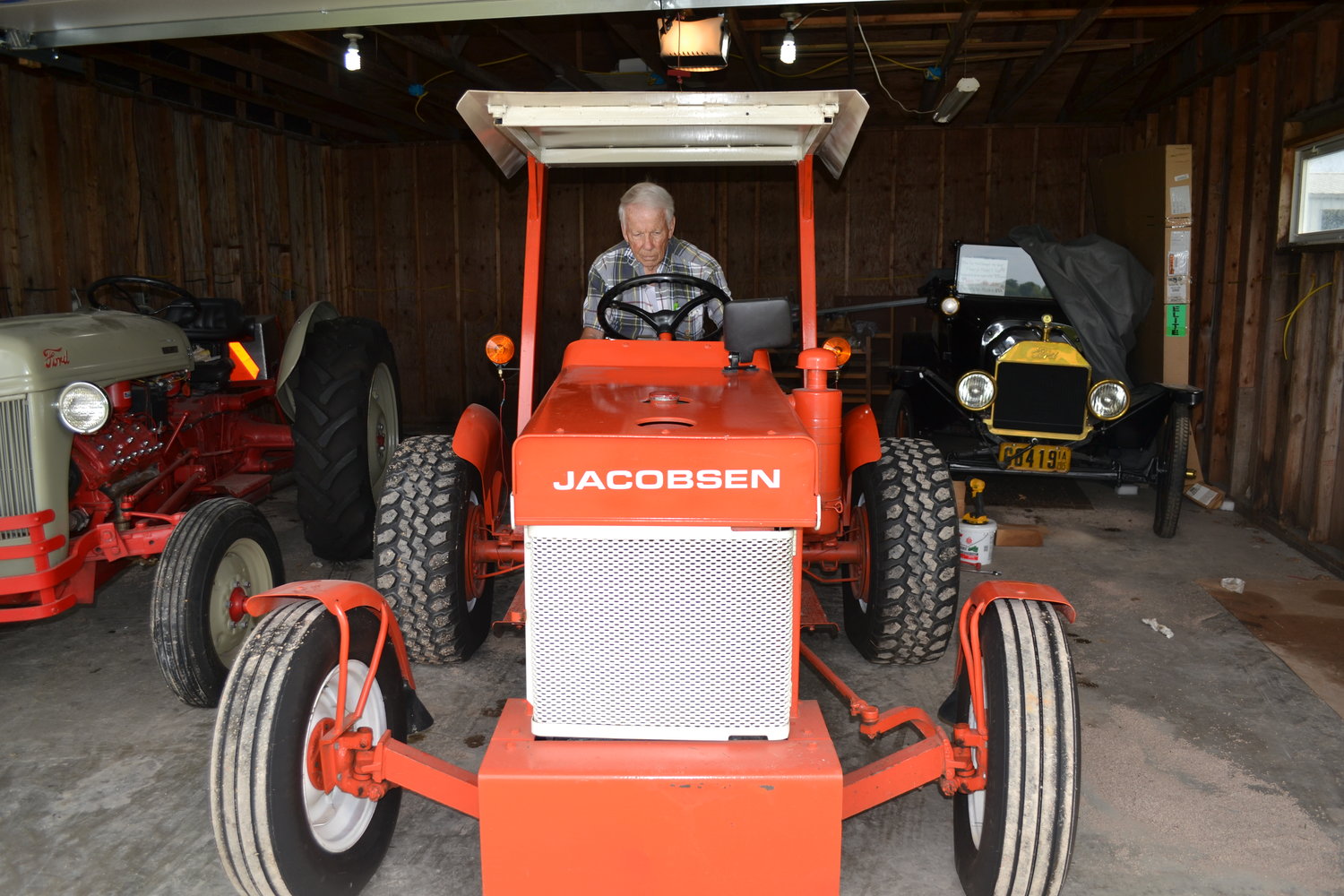 Lyle Zimmerman starts one of the tractors he had driven in the WMT Tractorcade this past week. He has several tractors stored at a farm south of West Liberty he has restored or is in the process or restoring.
Index photo by Xiomara Levsen
Posted Wednesday, June 15, 2022 9:36 am
Xiomara Levsen, Index Co-Editor

Restoring and riding tractors is something Bob Cline and Lyle Zimmerman have done since they were young.

Cline and Zimmerman have also ridden in several of the WMT Tractorcades together.

“You see the best of Iowa at 12 miles an hour,”Cline said. “It’s just a fun thing to go with like-minded people that are retired or semi-retired.”

The pace of the Tractorcade is slower and camaraderie the driver’s have with each other is something Bob enjoys. There are no arguments amongst themselves and if someone breaks down they all stop to help.

“They’re genuine people,” he said. “It’s just a chance to drive a tractor around eastern Iowa. Every tractor has a story to tell.”

Even the tractor he chose to ride in the WMT tractorcade this past week had one. It was a 1949 International Harvester that sat on his uncle’s farm after his uncle retired.

Cline had the tractor hauled back from Texas, repainted, the engine redone and bought new tires for it.

The last time Bob rode in the WMT Tractorcade was in 2016, he said. His brother, Bill, would often go with him and Zimmerman but was diagnosed with cancer and passed away.

When Cline heard the Tractorcade would be based out of West Liberty Bob he knew he wanted to ride it again, especially with Tractorcade being based at the Muscatine County Fairgrounds.

“It’s right in my backyard,” Bob said. “I wondered why they didn’t do that before.”

He hoped everyone in West Liberty was able to enjoy what the town had to offer them because it’s a vibrant community with many things to offer, which he would know since he grew up here.

“My parents came to West Liberty in 1937 and opened an International Harvester Dealership so I’ve been red forever,” Cline said.

The dealership was first located where Wink’s Bar and Grill is, then moved to where the new CarQuest auto parts store is until two years ago when JJ Nichting moved to the location out Interstate 80, he said.

Zimmerman started driving a steel wheel tractor at eight years old. He said he could pick up hay but couldn’t turn corners.

“But then in 1939, they came out with the first Ford tractor,” Zimmerman said. “I thought I died and went to heaven. Man, the hours I put on that thing.”

Zimmerman owns Ford tractors and has several he stores in a machine shop south of town. He said he likes to restore them to their former glory.

One of his tractors has a 302 high performance Ford Mustang engine in it and was clocked going 40 miles per hour, he said.

Zimmerman pointed something out on another tractor that he drove in the Tractorcade.

“The decals that are down here that show you the shift pattern,” Zimmerman said. “The decals are under the seat. This decal (pointing at the dash), all these decals are original decals. I painted it but I saved it (the decals) so it would be original.”

The tractor was used to mow a football field in Pennsylvania, he added. Zimmerman repainted everything but where the decals were located.

He shrink-wraps from the dashboard to behind the seat because it keeps him dry if it was raining or warm when it was cold, he said.

“I’ve had a lot of comments about it but it works,” Zimmerman said. “One year, we left Pella and it was cold. It was just plain cold in the morning. We left in the late group but still it was cold. I had shrink-wrap on from the night before from when it rained so I left it on.”