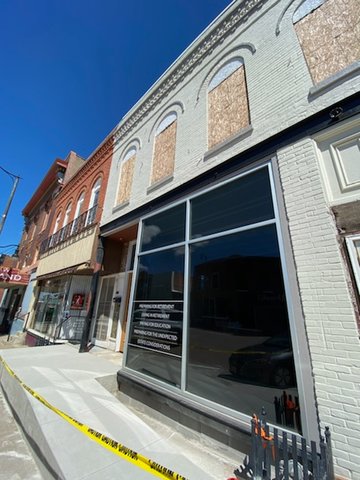 Through the Community Catalyst Building Remediation Program, the Iowa Economic Development Authority (IEDA) will provide grants to communities for the redevelopment, rehabilitation or deconstruction of buildings to stimulate economic growth or reinvestment in the community.

IEDA states that strong applications will show the potential of catalytic economic growth in the community; improve appearances and safety; make use of underutilized property, exhibit appropriate design standards; and be well-funded. Economic growth may include the creation of additional jobs, growth of new or existing businesses, development of new housing units, increase property values or potential population growth.

The $100,000 will go towards the renovation project at 115 East Third Street in West Liberty, where local developers, Emily Geertz and Frank Wagner are transforming a dilapidated building that was condemned by the City of West Liberty a couple of years ago, into a beautiful, updated building with modern touches, while preserving its historic look and legacy in West Liberty’s historic downtown.

When complete, 115 East Third Street will house commercial space in the front of the building (currently leased by Sara Sedlacek’s Edward Jones office), Liberty Public House in the rear of the building (a wine and beer bar also offering special event space), and two apartments upstairs.

Brooks submitted the multi-stage process grant on behalf of the City of West Liberty, and was excited that his efforts paid off.

“With the increased prices for materials, large renovations such as this one would not be feasible without external support, and I can’t think of a community that deserves that support more than West Liberty. Our citizens work so hard to make this town a better place for everyone, it’s rewarding to be able to help bring in a little assistance.”

This latest grant makes the third six-figure grant that Brooks has received for the community since he joined WeLead in 2021.

WeLead is a non for profit organization that exists to promote and sustain quality of life in West Liberty, Atalissa, and Nichols, and seeks to enable growth, to promote business development and expansion, and to foster a healthy business climate.